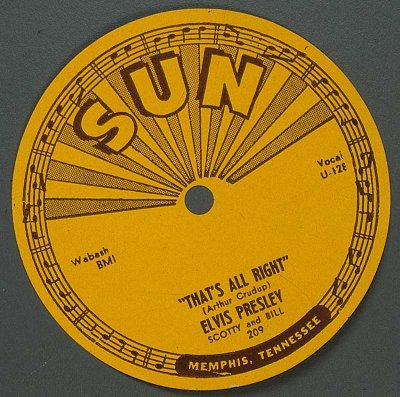 Elvis Presley's first single for Sun Records was a cover of "That's All Right" with his own unique stamp.

Even though nothing came of his first session at the Memphis Recording Service, Elvis was determined to give it another shot. He returned to the recording service in January 1954 to record two more songs on acetate. He sang "Casual Love Affair" and a country tune called "I'll Never Stand in Your Way." This time Phillips worked the controls. Though he offered the young singer little in the way of encouragement, he did take down Elvis' phone number and address.

Phillips didn't call Elvis until Peer Music of Nashville sent Sun Records a demo recording of a ballad called "Without You." Phillips decided to allow Elvis to record the new ballad. Unfortunately, Elvis could not seem to master the song, so Phillips asked him to sing anything else he knew. Delighted with the opportunity, Elvis eagerly ran through his extensive repertoire of country songs and R&B tunes. Phillips was impressed enough to suggest that the hopeful singer get together with Scotty Moore, a young guitarist who played with a local country-western combo, the Starlight Wranglers.

Elvis dropped by to see Moore almost immediately. Moore recalls, "He had on a pink shirt, pink pants with white stripes down the legs, and white shoes, and I thought my wife was going to go out the back door -- people just weren't wearing that kind of flashy clothes at the time." (Ed. note: In fact, in the 1950s, pink was the hot fashion color for everything from men's clothing to cars.) Moore introduced Elvis to bass player Bill Black, and the three musicians spent the long, hot Memphis summer trying to find a sound that clicked.

The trio worked in the recording studio at Sun Records instead of performing in front of a live audience. Recently developed magnetic recording tape made it possible for them to do one take of a song, listen to it, then make adjustments for the next take. Presley, Moore, and Black finally hit upon their sound while they were fooling around during a break one night.

Elvis started singing Arthur "Big Boy" Crudup's blues song, "That's All Right," with a fast rhythm and in a more casual style than most blues songs, and Moore and Black jumped in. Phillips' voice boomed out from the control booth, "What are you doing?" None of them really knew. How could they? How could they know that they had stumbled onto a new sound for a new generation?

Phillips was excited about the trio's sound and recognized its potential. He asked them to refine their unique interpretation of "That's All Right," and then he recorded it. The flip side of their first record was their rendition of the bluegrass standard "Blue Moon of Kentucky," made famous by Bill Monroe and the Bluegrass Boys. Elvis' first record seemed to symbolize the roots of his musical sound; a blues song occupied one side while a country song made up the flip side.

Elvis' treatment of both songs didn't sound much like the recordings by the original artists. His approach was far more easygoing, which gave his renditions an air of spontaneity. Instead of the hard vocal delivery and tense rhythm of Crudup's version of "That's All Right," Elvis used a more-relaxed vocal style and rhythm. For "Blue Moon of Kentucky," the tempo was speeded up, and two elements were added that would make Elvis' sound famous.

He syncopated certain lyrics, using a sort of hiccuping sound, while Sam Phillips added a reverberation, resulting in the famous echo effect. Elvis' style became the basis of "rockabilly," the fusion of country music (commonly called hillbilly music) with a rhythm-and-blues sound that has been relaxed and speeded up, or "rocked." The term rockabilly was not widely known until after Elvis became a household name.

At the time he cut his first record for Sun, there was no word that could adequately describe his style of music. When the press attempted to explain his sound, they usually made a mess of it, often confusing their readers with inappropriate or comical comparisons to other types of music. Elvis was referred to at various times as a "hillbilly singer," "a young rural rhythm talent," a "white man...singing Negro rhythms with a rural flavor," and "a young man [with a] boppish approach to hillbilly music."

Not long after Elvis' success, other rockabilly and country-western singers showed up on the doorstep of Sun Studio, hoping that Phillips could work the same magic with them as he had with Elvis. Phillips eventually recorded Johnny Cash, Jerry Lee Lewis, Carl Perkins, Roy Orbison, Charlie Feathers, Billy Lee Riley, Dickie Lee, and other artists.

With their flashy clothes, raw sound, and fervent delivery, these singers forged a new sound and style that was intensely Southern, or "Dixie-fried." As Bill Williams, Sun Records publicist, recalled, "I think every one of them must have come in on the midnight train from nowhere. I mean, they came from outer space." Yet, the influence of Sam Phillips and Sun's recording artists on the development of rock 'n' roll can never be overestimated.

As his first recordings began to spread, Elvis gained recognition for his unique sound. Follow the early successes of Elvis Presley on the next page.