Elvis Presley's Life in the Military 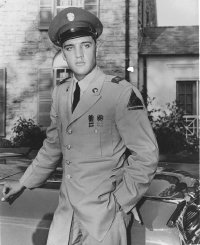 On leave for two weeks at the start of June 1958, Elvis spent time with family and friends. He also recorded several new tracks in Nashville to help satisfy RCA's need for new material while he was out of commission. Then he returned to Fort Hood, and after receiving the standard soldier's permission to live off base with his "dependents," he obtained a three-bedroom trailer home and moved there with his parents, grandmother Minnie Mae, and friend Lamar Fike.

When the trailer became a little too cramped, following the arrival of cousins Gene and Junior Smith, he simply rented a house where he could stay with his family on the weekends while undergoing advanced tank training during the week. Friends from all over would drop by, and Gladys would prepare food for everyone. All in all it was a pretty cozy setup until Gladys's health declined, and she and Vernon had to return to Memphis at the start of August.

Ever since her son's induction, Gladys had been anxious about his well-being and distraught at the thought of his absence for an extended period of time. Now extremely sick and unable to eat, Gladys was admitted to Methodist Hospital on August 9 with acute hepatitis.

Having completed his advanced tank training, Elvis was about to commence his basic unit training, but it quickly became clear that his mother's condition was serious. On August 12 the Army granted him emergency leave. Elvis headed straight for the hospital, and when his mother saw him she appeared to rally. However, during the early hours of Thursday, August 14, 1958, with Vernon by her side while Elvis was at home, Gladys Love Presley succumbed to a massive heart attack. She was just 46. It was a blow from which Elvis would never fully recover.

Elvis broke down several times in the days leading up to his mother's funeral. He sobbed hysterically while Gladys' favorite gospel group, the Blackwood Brothers, performed at the service in the Memphis Funeral Home, and he was equally inconsolable at her Forest Hill Cemetery grave site, crying out, "Oh God, everything I have is gone."

The mourning continued through the next few days as Elvis was granted extended leave. Evidently his fans were grieving too -- they sent him more than 100,000 cards and letters, around 500 telegrams, and more than 200 floral arrangements to express their sympathy for his loss. Still, even though it would never be the same, life had to carry on. Elvis returned to Fort Hood on August 24, and within a month he shipped out to join the 1st Medium Tank Battalion, 32nd Armor, 3rd Armored Division in what was then known as West Germany.

Along the way, Colonel Tom Parker organized a press conference when Elvis' troop train arrived in Brooklyn, New York, at which he answered questions about his army duty, his music, and his mom. He offered a heartfelt account of his continued mourning to the assembled reporters:

"Everyone loses their mother, but I was an only child, and Mother was always right with me all my life. And it wasn't only like losing a mother, it was like losing a friend, a companion, someone to talk to. I could wake her up any hour of the night if I was worried or troubled about something...she'd get up and try to help me."

During the transatlantic trip aboard the U.S.S. General Randall, Elvis bonded with a fellow singer named Charlie Hodge, whom he'd met on the troop train to Brooklyn, and together they took charge of a talent show. But without his mother to see or talk to ever again, Elvis seemed lonely and adrift.

In West Germany, there was another press conference and further meet-and-greets during the first few days. Vernon and his mother, Minnie Mae -- whom Elvis had affectionately called "Dodger" ever since she had ducked away from a ball he had thrown at her as a child -- set up residence with Elvis and his friends Red West and Lamar Fike in a couple of hotels: one in Bad Homburg, near Frankfurt; the other in Bad Nauheim, about 20 minutes from the base.

Elvis would rise every morning at 5:30, eat the breakfast Dodger had prepared for him, and leave for base by 6:30 in a black Mercedes taxi, before returning for lunch and dinner. The only exception was Friday, when Elvis and his fellow soldiers had to stay late into the evening, cleaning the toilets and their barracks for weekly inspection the following morning. It had been a long time since the King was obliged to do any such chores, yet he mucked in with the other soldiers and did his best to be perceived -- during the day, at least -- as just a regular guy.

Some evenings, Elvis and his friends surreptitiously went to the movies -- sneaking into theaters after the lights went down and leaving just before the final credits to avoid being noticed -- and even to a couple of Bill Haley concerts. Elvis also dated a few girls while keeping in regular phone contact with girlfriend Anita Wood back in America.

Through November and much of December, Private Presley went on maneuvers at Grafenwohr and was promoted to Private First Class for his endeavors in field exercises. It was reportedly around this time that one of the sergeants introduced him to amphetamines as a means of staying awake during the long hours of training. For Elvis, taking amphetamines quickly became a regular habit.

Although he returned to Bad Nauheim to spend the holiday season with family and friends, he also spent part of Christmas Eve helping to decorate the company's Christmas tree. Then, at the start of January 1959, one of the girls whom Elvis had briefly dated, 19-year-old Elisabeth Stefaniak, moved into the Hotel Grunewald with him and his inner circle, having accepted an invitation to work as his secretary.

It was particularly handy that, courtesy of her German mother and American stepfather, Elisabeth was bilingual. So, installing herself in a corner room at the hotel, she answered his fan mail and became romantically involved with him despite the knowledge that he continued to see other girls.

The time Elvis spent in the army was a whirlwind of activity. See the next section to learn more about what Elvis did on leave, and to read about the end of Elvis' military career.