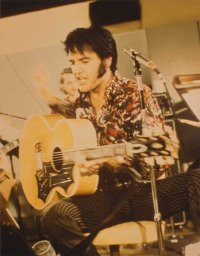 Elvis -- That's the Way It Is included rehearsals for Elvis Presley's live shows in Las Vegas.

About half of the movie features his performance onstage in the main room. One segment in which Elvis sings "Mystery Train" and "Tiger Man" was filmed at a concert in Phoenix. The rest of the movie documents the excitement Elvis generated as a performer. Elvis is shown in rehearsal for the show, whipping his band into shape and mastering new material for the act.

Intercut with the rehearsal footage are shots of the massive promotional buildup in Las Vegas. They also sent a film crew to Luxembourg to record an Elvis Presley convention.

Elvis -- That's the Way It Is was directed by Denis Sanders, who had won an Oscar for Best Documentary for his film, Czechoslovakia 1968. Expert cinematographer Lucien Ballard caught the excitement of Elvis' performance onstage with eight Panavision cameras.

The film was released on November 11, 1970, to good reviews. The Hollywood Reporter remarked that Elvis was probably the only entertainer alive who could draw enough people into a theater to make a documentary profitable at the box office. The film also introduced Elvis as a live performer to an audience who was too young to remember him from the 1950s and knew Elvis only from his movies.

In 1972, MGM released another feature-length documentary about Elvis, which was shot in the spring of that year. Elvis on Tour focuses on his road show during a 15-city tour. This film captures the final phase of Elvis' career at its highest point. It was produced by Pierre Adidge and Robert Abel, who had won critical acclaim for their rock documentary Joe Cocker: Mad Dogs and Englishmen.

Some of the editing was supervised by Martin Scorsese, who also worked on the editing of Woodstock. Andrew Solt is credited with doing research on Elvis on Tour. He later coproduced the semidocumentary This Is Elvis as well as Imagine, a film about John Lennon. Elvis on Tour won a Golden Globe for the Best Documentary of 1972; it is the only Elvis Presley movie to be honored with an award of any kind.

Elvis' return to concert performing probably contributed to the disin­tegration of his marriage to Priscilla. Gone from Graceland much of the time while touring, Elvis saw less of Priscilla and his daughter, Lisa Marie, as his career and lifestyle took a different direction. The horrendous pace of performing in a different city every night made traveling together difficult, and Elvis enforced a "no-wives" rule while on the road, which applied to himself and all members of the Memphis Mafia.

Priscilla left Elvis in early 1972, and Elvis sued for divorce the following August. Elvis' lawyer succinctly summed up the problem when he released this statement: "Elvis has been spending six months a year on the road, which put a tremendous strain on the marriage." In October 1973, the couple officially divorced, but it was an amicable split. They held hands during the divorce proceedings and walked out of the courtroom arm in arm.

The years 1969 through 1973 were an incredibly creative time for Elvis. He returned to performing live and developed a new sound and a new image that completely replaced the singing-movie-star image that he believed never really matched his talents. Dressed in gold and jewels, this Elvis Presley lived up to the titles "World's Greatest Entertainer" and "The King of Rock 'n' Roll."

By the mid-1970s, the constant touring began to wear on Elvis. To read more about Elvis Presley's physical and mental decline, see the next section.