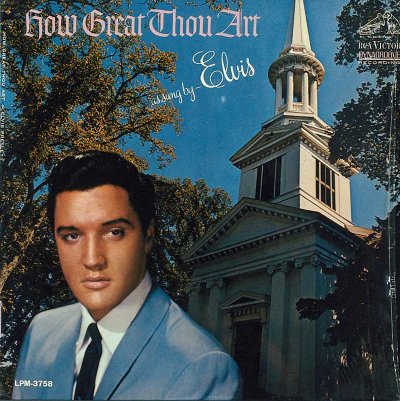 In 1967, Elvis Presley won a Grammy for Best Sacred Performance for the album How Great Thou Art.

From January 1964 to May 1966, Elvis recorded nothing but movie soundtracks, mostly in Hollywood. Unsatisfied with his life for complex professional and personal reasons, he did not venture into the Nashville studios to cut any album material. When he did finally decide to record new material, he returned to the studio with new musicians and a new producer, Felton Jarvis.

Elvis went to the RCA studios in Nashville in the spring of 1966 to make a gospel album, How Great Thou Art. As a child of the South, he was steeped in gospel music. Memphis was the center of white gospel music during the 1950s, and as a teenager Elvis had frequently attended all-night gospel sings at Ellis Auditorium. Early in his recording career, he developed the lifelong habit of warming up before each session by singing gospel harmonies with the Jordanaires or with his companions.

Elvis loved all gospel music, but he favored the style of four-part harmony sung by male gospel quartets who were associated with the shapenote singing schools of the early 1900s. A quartet usually included first and second tenors, a baritone, and a bass. As a teenager, Elvis' favorite gospel quartets included the Blackwood Brothers, whom he knew personally, and the Statesmen, whose lead singer was the colorful Jake Hess.

The Statesmen were known for their emotional, highly stylized delivery, and Hess had a reputation as a flamboyant dresser. So Elvis was delighted when Hess and his latest quartet, the Imperials, joined him in the studio to record "How Great Thou Art," along with a few secular songs that were released later. Also on board were the Jordanaires and a female backup group.

The arrangements for the gospel numbers consisted of Statesmen and Blackwood Brothers material. For most numbers, Elvis sang as the solo artist while one of the quartets backed him up. A high point of the sessions occurred when Elvis and Hess sang a duet on the Statesmen's famous "If the Lord Wasn't Walking by My Side."

How Great Thou Art proved to be a milestone in Elvis' career, winning him the first of his three Grammys, this one in the Best Sacred Performance category. He won Best Inspirational Performance for He Touched Me in 1972 and again in that category for the song "How Great Thou Art" from the album Elvis Recorded Live on Stage in Memphis in 1974.

Elvis created How Great Thou Art during a time of personal and professional struggle. He had been frustrated creatively by the formulaic movies and their conventional soundtrack music. It is most fitting that Elvis should record a gospel album at a time when he was at a creative and spiritual low. Gospel had inspired his interest in music, it had always calmed his nerves before a session or a performance, and now, as they say in the South, it called him back home.

After years of starring in movie vehicles and mainly recording soundtrack material, Elvis had fallen into a rut, devoid of creativity and vitality. The decision to turn Elvis into a big-screen leading man via a series of musical comedies was arguably a good career move in the early 1960s, but by 1968 the movie formula was clearly a dead end.

In December of that year, the broadcast of his television special, Elvis, turned his career around by introducing him to hipper recording material and new directions. To learn more about how the television special helped put Elvis back on top, see the next section.