Elvis Presley Back on Top 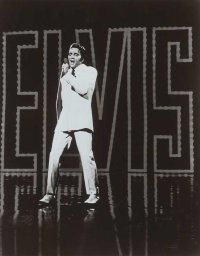 In 1968, Elvis starred in a TV special for NBC commonly called The '68 Comeback Special.

Inspired and invigorated by the success of his television special, Elvis walked through the door of tiny American Sound Studios in Memphis in January 1969 to make quality music that would garner him hit records. Elvis had not recorded in his hometown since he left Sun in 1955, but the musical atmosphere at RCA's Nashville studios had become stale. His friends and associates encouraged him to record at American Sound because Nashville would yield nothing for him at this time.

American Sound Studios, a small studio in a rundown neighborhood, was operated by Chips Moman. With Moman as producer, Elvis worked hard to record his first significant mainstream album in years. In retrospect, From Elvis in Memphis may be his most important album because it brought his recording career back from soundtrack purgatory and set a creative standard for the next few years.

The material Moman brought to Elvis represented all styles of music. Some songs were from the pens of new country songwriters who had been influenced by the innovative music scene of the 1960s. From Mac Davis came a song with socially conscious lyrics called "In the Ghetto," which was light-years away from the benign movie tunes Elvis had been recording. It became a Top Ten hit for Elvis in the spring of 1969. He also recorded Jerry Butler's rhythm-and-blues hit, "Only the Strong Survive."

Elvis recorded 32 songs from a variety of genres, but the 12 cuts on From Elvis in Memphis seem weighted toward modern country music. Elvis' intense version of "Long Black Limousine," about a poor country girl who moves to the big city, turned a sentimental country song into a bitter social comment.

Other passionately sung country tunes on the album include Eddy Arnold's "I'll Hold You in My Heart (Till I Can Hold You in My Arms)" and "After Loving You." Also among the 32 tracks Moman produced at American Sound Studios were the rock-flavored hits "Suspicious Minds" and "Kentucky Rain," which were not included on From Elvis in Memphis. "Suspicious Minds" was included on the follow-up release, From Memphis to Vegas/From Vegas to Memphis.

The house band at American Sound Studios included musicians who were steeped in all forms of Southern music. Both black and white artists recorded there, and the house band remained generally the same. Many of these musicians, including guitarist Reggie Young (who played Scotty Moore's old guitar on "Suspicious Minds"), bassist Tommy Cogbill, and pianist Bobby Wood, had grown up on Elvis' music. No more fitting group of musicians could have backed Elvis on his return to Memphis.

The year 1969 became a precedent-setting year for Elvis Presley in the way that 1956 and 1960 had been. Just as the events in those years had determined a certain image for Elvis, so did the events of 1969 point Elvis toward a new image and a new sound. His dynamic recordings from the first half of that year helped steer him toward this goal, but his smash engagement in Las Vegas that summer constructed the image that would stay with him for the rest of his career.

After Elvis felt the excitement of singing for a live audience during the performance segment of the comeback TV special, he was excited to return to the concert stage. In early summer of 1969, Elvis was invited to play at the new International Hotel in Las Vegas.

The main room of the hotel had not yet been opened, and Elvis was asked to do the honors. When the Colonel decided that Elvis shouldn't risk making his live comeback on an untested stage, the International Hotel booked Barbra Streisand to open the main room in July. It then scheduled Elvis for August and paid him a half million dollars for four weeks. On the marquee was one word: "ELVIS."

Elvis had not appeared in a live concert since 1961 when his music had been much simpler. In designing his return to live performing, Elvis chose not to re-create his earlier image or sound. Instead, he planned his act on a broad scale.

For his Las Vegas performances, he was joined onstage by pop/gospel quartet the Imperials, female backup singers the Sweet Inspirations, a rock band, and a 35-piece orchestra. The members of his rock band included the well-known Southern blues guitarist James Burton, drummer Ronnie Tutt, bassist Jerry Scheff, keyboard player Larry Muhoberack, and guitarists/vocalists John Wilkinson and Charlie Hodge. (Hodge had been part of the Memphis Mafia ever since he and Elvis had been in the army together.) Part of the reason for such an extensive entourage was doubtless due to the large 2,000-seat room in which Elvis would perform at the International, but the enormous sound created by Elvis and his musical entourage seemed symbolic of Colonel Parker's favorite billing for his boy -- "the World's Greatest Entertainer."

To learn more about Elvis' return to the stage in Las Vegas, see the next section.