The Teenage Years of Elvis Presley 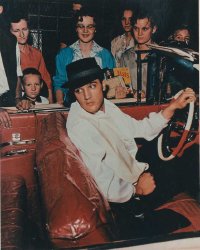 Long before he became a national heartthrob, Elvis Presley's biggest fans were his parents and close friends in Memphis.

Through seventh and eighth grades, Elvis showed up at Milam Junior High School every day with his guitar, playing it for anyone who cared to listen in the basement recess area during lunch, and he began embellishing his performances with strains of what was commonly known as "race music."

For many of his schoolmates this was a turnoff -- a few even made their point by cutting his guitar strings -- yet others at least turned an ear toward his vocalizing of country standards. No one knew they were witnessing the birth of a legend. And no one really seemed upset when they learned that he was moving to Memphis.

Perpetually out of money and by now out of reasons to remain in Tupelo, Vernon and Gladys decided it was time to make a new start across the state line in Tennessee. So they sold their few bits of furniture, loaded up their Plymouth with clothes and other belongings, and never looked back.

In Memphis, they initially lived in a rooming house on Washington Street and then another on Poplar Avenue, eating and sleeping in a single room while sharing a bathroom with three other families in a sixteen-unit house.

Vernon, who worked at a series of factory jobs, applied for public housing to improve their situation, and his request was answered in September 1949 when the Memphis Housing Authority moved the family into an apartment at nearby Lauderdale Courts, in the northern part of the city. The $35 monthly rent was a dollar more than it cost to live on Poplar Avenue, and the place itself was run-down and in need of repair, but at least the Presleys now had enough space to move, with a living room, kitchen, two bedrooms, and a private bathroom.

Lauderdale Courts, with its lively assortment of young families, was located close to downtown attractions, such as the stores and movie theaters along Main Street, as well as the clubs and bars along Beale Street. By most standards, this was a bustling community; to a wide-eyed 14-year-old accustomed to the figuratively duller lights of Tupelo it was probably nothing short of awe inspiring.

Here were all the elements to fire a teenager's imagination, as well as the means to help realize his ambitions, musical or otherwise. At this point, it's not clear quite what Elvis' ambitions were, except that he hoped to one day earn enough money to afford an easier life for himself and his family. Starting out in yet another school, he didn't share his musical hobby with his new classmates at L. C. Humes High School, where he majored in industrial arts/woodshop. But he did feel free enough to play the guitar and sing around a trio of boys with whom he became fast friends.

Farley Guy, Paul Dougher, and Buzzy Forbess all lived at Lauderdale Courts, and together they and Elvis went to the movies, swam, played football, wandered downtown, and even earned money mowing yards with a push mower purchased by Vernon. Farley, Paul, and Buzzy were aware of Elvis' interest in music, and so were his parents.

Vernon, Gladys, and Elvis often spent time gathered around the radio together to hear country acts like Eddy Arnold, Sleepy Eyed John, and the Louvin Brothers; and gospel groups like the Blackwood Brothers and Elvis' personal favorites, the Statesmen. Led by the charismatic Jake Hess, this quartet's flamboyant clothes and highly stylized singing made a deep impression on the young Elvis. Musical and cultural influences were bombarding him from all directions, and he was soaking them up like a sponge.

By the time Elvis was in tenth grade at Humes High, he had hooked up with another group of teenagers living in Lauderdale Courts: Lee Denson and Johnny Black, and brothers Dorsey and Johnny Burnette. The foursome had a loose-knit musical group that performed country standards outdoors for the residents on balmy summer evenings, and Elvis joined in to contribute background vocals.

His growing musical confidence also began to attract female attention, including that of early girlfriends such as Betty McMahan and Billie Wardlaw, both of whom lived in the Courts. Others at Humes High encountered an altogether different Elvis -- both in terms of appearance and demeanor -- during his junior year of high school, 1951.

Up until this point, Elvis' music was shared sparingly with family, close friends, and neighbors, but that was all about to change. To learn about the early music career of Elvis Presley, see the next section.