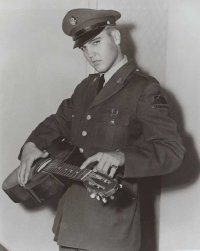 Elvis Presley managed to life a relatively normal life during his time in the U.S. Army.

In early February the Presley clan relocated to a three-story, five-bedroom house at Goethestrasse 14, which afforded everyone more space and privacy than the nearby Hotel Grunewald. For the exorbitant rent of $800 a month, it also provided them with a landlady named Frau Pieper who doubled as their housekeeper.

At last, Elvis was living in a home where he could relax away from prying eyes, listen to records, entertain friends, and sit at a piano to play and sing his favorite songs. He came home every day for lunch, and each evening he would spend time signing autographs for fans who waited patiently in front of the house. On Sundays he and some friends would play touch football just down the street.

Early in 1959, accompanied by friends Red West and Lamar Fike, Elvis used a three-day pass to visit Munich and call unannounced on Vera Tschechowa, an 18-year-old actress whom he'd met a few months earlier. Together, they visited the Moulin Rouge nightclub.

As usual, the press was on hand to photograph Elvis with his "latest flame." In this case they also took numerous shots of him posing with the club's showgirls, but all it really amounted to was a footloose and fancy-free young man having some fun. Enough fun, in fact, for him to pay a return visit to Munich's Moulin Rouge nightclub in mid-June before continuing his two-week furlough by traveling to Paris and dropping in on the original Moulin Rouge.

By June, Red West had returned to the United States, so Elvis was accompanied by Lamar Fike as well as his two army buddies Charlie Hodge and Rex Mansfield when visiting Parisian nightspots including the Lido, the Folies Bergère, and a club called Le Bantu that didn't even open until 4:00 a.m. All in all, the Paris stopover was reported to have been a live-by-night, sleep-by-day adventure. Elvis returned to the French capital for one last adventure in January 1960, although by then a new girl was occupying his thoughts.

Fourteen-year-old Priscilla Beaulieu had only recently been voted "Queen of Del Valley Junior High" by her classmates in Austin, Texas, when 24-year-old Elvis Presley first met her on the evening of Sunday, September 13, 1959. Brunette, with a sensuous mouth and sultry blue eyes, she was wearing a navy and white sailor dress with white socks and shoes; he, a bright red sweater and tan slacks. Brenda Lee's "Sweet Nothin's" was spinning on the record player.

Priscilla, as can be expected, seemed in awe of the superstar, while Elvis was said to be instantly infatuated with the beautiful stepdaughter of Air Force Captain Joseph Beaulieu. Captain Beaulieu had been transferred to Wiesbaden, a 45-minute drive from Bad Nauheim, just a month earlier, and Priscilla had been invited to visit Elvis at his home by mutual acquaintance Currie Grant, a U.S. Airman and assistant manager at Wiesbaden air force venue the Eagle Club.

Elvis spent the rest of that Sunday evening talking to Priscilla and, amid a room full of friends, even sang to her. It wasn't long before he asked Currie Grant to invite her back.

Soon Elvis and Priscilla began dating, and after Elvis met Priscilla's parents and convinced them that his intentions were honorable, they saw each other frequently during his last few months in West Germany. Because of Elvis' inability to go out in public unrecognized (and without creating a mob scene), most of his dates with Priscilla consisted of her visits to his house, where they were surrounded by Elvis' family members and friends. Although a relationship with someone so young could have had a ruinous effect on Elvis' image, there was surprisingly little publicity about his interest in Priscilla.

Elvis was promoted to sergeant on January 20, 1960, received his stripes on February 11, and was scheduled to be discharged from the Army in early March. Accordingly, he began preparing for the resumption of his life at Graceland and his career in Nashville and Hollywood, sending old girlfriend Anita Wood a French poodle for Christmas and calling her more frequently as his return to America drew closer.

Regardless, word of his relationship with Priscilla did reach the media, and on March 2, the day of his departure from West Germany, press photographers and news cameras captured her somber face as she waved good-bye to her love at the Rhein-Main airbase. The photos ended up in Life magazine, and Priscilla was labeled "the girl he left behind." Which she was...for the time being.

Discharged on Saturday, March 5, after disembarking in Fort Dix, New Jersey, Elvis finally arrived back in Memphis two days later amid a snowstorm and much hoopla. That afternoon, sitting in his father's office behind the main house at Graceland, he gave a press conference, during which he acknowledged -- yet tried to play down -- his relationship with Priscilla Beaulieu, focusing instead on how happy he was to be back home. "I just can't get it in my mind that I'm here," he told the media.

Elvis wasn't the only Presley to find a new love in Germany. His father, Vernon, met Dee Stanley while the Presley family was living in Bad Nauheim. At the time they met, Dee was in the process of divorcing her military husband. Dee returned to America with Vernon after Elvis' discharge, and the two were married in Huntsville, Alabama, in July 1960. Elvis did not attend his father's wedding, which led to speculation that the marriage caused friction between the two men. (Elvis not only gained a stepmother, but he got three stepbrothers as well.)

As time would tell, Elvis was a changed man when he emerged from the Army. Critics speculated that the damage done to his career during his two years in the Army could be irreparable. Instead, Elvis surprised everyone by trading in the frenzied trappings of his rock 'n' roll youth for a more mature image built on the good publicity from his tour of duty. The success of his movies and pop music albums was a testament to the wide appeal of his new, more mellow style. See the next section to learn more about Elvis' return to America.