Elvis Presley and Loving You 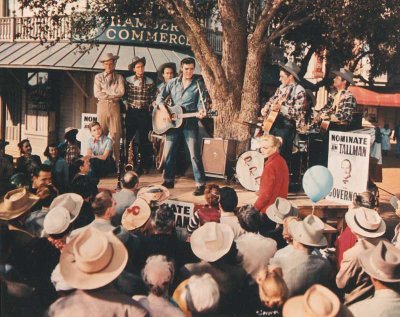 Elvis Presley was not only the star of Loving You; in a sense, he was also the subject.

The first movie Elvis Presley made for producer Hal Wallis was Loving You. It was developed by Wallis and writer/director Hal Kanter specifically for the young star. Not only was this musical drama designed to showcase Elvis' best talents, but the storyline was rather ingeniously based on his own life.

Loving You, released by Paramount in July 1957, stars Elvis as an unknown but talented singer who has a totally new sound. His character, Deke Rivers, hails from the South, but he doesn't fit in with the country-music crowd. A ruthless music promoter, played by Lizabeth Scott, recognizes Deke's unique talent and exploits him as a fresh face who appeals to teenage audiences. The media misrepresents his appeal and brands him a dangerous hothead until Deke proves he has simply been misunderstood.

The storyline and the well-written tunes tailored to Elvis' musical style were guaranteed to attract his fans. Contrary to popular belief, Elvis received his first on-screen kiss in Loving You, not in Love Me Tender. The honor went to a young actress named Jana Lund. She had a small role in the movie as a sexy Deke Rivers fan who, unfortunately for Deke, has a jealous boyfriend.

To get the script as close as possible to real-life events, Wallis sent director Hal Kanter to Memphis to observe Elvis' act and lifestyle while he was on the road. Kanter was in Shreveport when Elvis gave one of his last performances on Louisiana Hayride.

Kanter's movie attempts to capture the excitement Elvis generated in his audience during a concert. The performance scenes in Loving You were accurate down to the constant popping of flashbulbs, the hysterical screaming of the audience, and the almost unbearable tension that built up before Elvis appeared on stage. In an article Kanter later wrote for Variety, he referred to Elvis' position in this mass hysteria as "the eye of the hurricane." It was a position Elvis would hold for the rest of his life.

Kanter also managed to depict the unpleasant side of Elvis' fame in Loving You. Fans are shown swarming around Deke Rivers in the film, just as Elvis was often followed and mobbed after he became famous. Fans infringe on Deke's personal life, making demands on his time and badgering him with selfish requests. Deke's fancy new automobile is covered with lipstick messages and phone numbers in the same way that Elvis' cars were sometimes defaced by female fans desperate to get his attention.

While making Loving You, Elvis went out with Yvonne Lime, an actress in the movie. Yvonne revealed what it was "really" like to date Elvis in the movie magazine Modern Screen. The article was just a publicity piece that presented Elvis as a shining example of wholesome living: He was the perfect gentleman, devoted to his mother, and liked to sing religious songs at parties. His rock 'n' roll image, long hair, and sideburns were explained away as a case of nonconformity.

Elvis asked his parents, Vernon and Gladys, to join him in Hollywood for the filming of Loving You because he had missed their company so much while making Love Me Tender. Hal Kanter arranged for them and some family friends to make a cameo appearance near the end of the movie as members of a concert audience. After Gladys's death, Elvis refused to watch Loving You because it was such a painful reminder of his mother.

In addition to his parents, Elvis' longtime backup musicians, Scotty Moore, Bill Black, and drummer D.J. Fontana, appeared in the movie as members of a country-western band. Even the Jordanaires popped up in the movie for a brief appearance.

The soundtrack for Loving You, which was Elvis' third long-playing album for RCA, reached No. 1 on some pop charts. This particular record also established a pattern in which songs from Elvis' latest film would be combined with tracks from recording sessions to make up an album. Elvis' films then served as elaborate promotions for his albums and vice versa. This was part of the Colonel's plan to get as much mileage from Elvis' movies as possible. One vehicle promoted the other for the maximum exposure of both.

Elvis followed up the success of Loving You with another successful film and album that was destined to become a classic. To learn more about Elvis Presley's hit Jailhouse Rock, see the next section.