The Early Life of Elvis Presley 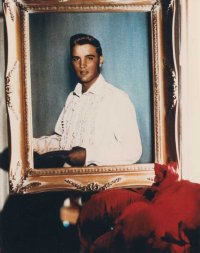 The one constant in Elvis Presley's early life was the unconditional love and support of his parents, Gladys and Vernon.

Although material goods weren't readily available during his early years, Elvis never lacked the one thing that is most important to any child: the love of his parents. Vernon was a dedicated father and Gladys adored her only child, forming a bond that was so close, it extended to lifelong baby talk between the two, such as Elvis calling her by the pet name of Satnin'.

Scared to let him out of her sight, Gladys accompanied Elvis everywhere, including the tiny First Assembly of God Church, where her uncle Gains Mansell was the preacher and where Elvis got his first real taste of music. At age two, he would slide off his mother's lap, climb onto the platform in front of the 25-strong congregation, and stand before the choir, trying to sing along even though he was too young to know the words to the hymns.

Another place that mother and son regularly visited was the Priceville Cemetery, where his twin brother, Jesse Garon, was buried in an unmarked grave. Although bolstered by Gladys' belief that, as reported in a September 1956 issue of TV Guide, "when one twin died, the one that lived got all the strength of both," Elvis grew up in his brother's shadow.

Nevertheless, he was always mindful of Jesse's ghostly presence watching over him, ensuring that he tried to do the right thing. This, together with the special confidence he shared with his mother, encouraged an insular quality that Elvis would retain to the end of his days.

Many who knew him, including his wife, Priscilla, have attested to a loneliness that no one could resolve, and while this side of Elvis was greatly exacerbated following Gladys' death during his early twenties, it stemmed from a childhood in which he often retreated into his own little world -- a world defined by a strong attachment to his mother and the florid thoughts of his fertile imagination.

Life was fairly settled during Elvis' first three years. He and his parents formed a tight-knit trio, rarely socializing or venturing far from the family home -- but everything changed in May 1938 after Vernon went to prison for his part in altering and cashing a check he received from Orville Bean.

Vernon was indicted for forgery, along with Travis Smith and Luther Gable, and sentenced to three years at the Mississippi State Penitentiary. He served only eight months of his sentence, but during that time Bean repossessed the Presley home, forcing Gladys and Elvis to move into a couple of temporary homes: next door with Vernon's parents, and then on Maple Street in Tupelo, where they lived with Gladys' cousins Frank and Leona Richards.

If this was a difficult period for Vernon, it wasn't much easier for his wife and son. Gladys struggled -- and sometimes failed -- to make ends meet taking in laundry and working as a seamstress, while Elvis suffered through the realization of the separation anxiety that he felt with regard to his father.

Elvis was extremely afraid of losing his father. When the family went swimming, Elvis didn't want Vernon to dive for fear that something bad would happen to him. In another instance, a neighbor's house caught fire, and Vernon rushed inside to help save their belongings. Gladys reportedly had to hold her distraught son back from going in after his father. Elvis cried and screamed at the possibility that Vernon could get hurt, and Gladys had to reassure him by telling him sharply to trust that Vernon knew what he was doing.

That last comment wouldn't have reassured the child in 1938, when many of his worst fears came true. His only respite came in the form of those weekends when Gladys and Elvis made the five-hour bus journey to visit Vernon in the Mississippi State Penitentiary at Parchman. The ten-hour round-trip -- which they made all in one day -- presumably solidified the mother-son union more than ever.

When Vernon was released in February 1939, a month after Elvis' fourth birthday, Gladys and Elvis were still living with Frank and Leona Richards on Maple Street. Before long, however, they were back in East Tupelo and, following a brief stay with Vernon's older brother Vester (who was married to Gladys' sister Clettes), living in a succession of low-rent homes.

From a very early age, Elvis' interest and aptitude for music was apparent. Learn about the musical influences of Elvis Presley in the next section.