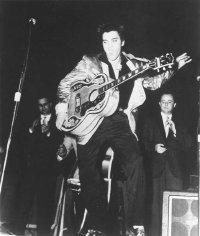 Elvis Presley's frantic performance style and never-before-heard sound made him an instant hit with fans.

Sam Phillips took a copy of Elvis Presley singing "That's All Right" to popular disc jockey Dewey Phillips (no relation) for the latter's Red Hot and Blue radio program. At first Memphis' hottest deejay hesitated to play the Sun recording because his show was usually reserved for the music of black artists, but on July 7, 1954, he played the record on the air.

The station received dozens of requests for both sides of the disc, and Phillips played the two songs over and over. After receiving 14 telegrams and almost 50 phone calls in a matter of hours, he decided to interview the unknown singer on his program that very night.

Elvis was supposedly too nervous to stay at home and listen to himself on the radio, so he had gone to the movies. His parents, Vernon and Gladys, dashed to the theater to pick him up, and then rushed him to station WHBQ.

Dewey Phillips asked Elvis a variety of questions about his life and his interests, including what high school he had attended. This was a careful tactic on Phillips' part, for as soon as Elvis said "Humes" the audience knew he was a white man because the school was all white. At that time in 1954, Memphis schools were not yet integrated.

"That's All Right" became a fast-selling record in the Memphis area. Elvis' first single steadily climbed up the country-western charts by the end of July 1954.

Elvis' second record was released on September 25, 1954. It included the R&B tune "Good Rockin' Tonight," first made popular in 1948 by Wynonie Harris, and a country pop song called "I Don't Care If the Sun Don't Shine." This record moved up the charts even more quickly than his first single. It sold 4,000 copies in the Memphis area in two-and-a-half weeks.

By this time, Elvis was singing with Scotty and Bill at such Memphis night spots as the Eagle's Nest. At first, the talented newcomer made guest-star appearances with the Starlight Wranglers, but soon Elvis, Scotty, and Bill were performing on their own. They were called Elvis Presley and the Blue Moon Boys but often billed as the Hillbilly Cat and the Blue Moon Boys.

By this time, the three men had decided they needed to hire a professional manager. Bob Neal, a disc jockey at country station WMPS in Memphis, accepted the job and began pushing their Sun recordings, booking tours in the country-western clubs across the South and the Southwest, and handling all their business arrangements.

Bob Neal encountered a double problem in getting radio stations to play Elvis' records. The country-western stations thought Elvis sounded too much like a rhythm-and-blues singer, and blues stations found him too country. Also, audiences on the smaller country circuits considered the trio's frenzied performances to be too wild. Aside from Elvis' personal performing style, bass player Bill Black liked to clown around by dancing with his huge bass fiddle or rolling across the floor with it.

By 1955, these problems began to take care of themselves as Elvis' sound became more widely known, thanks to his weekly performances on the Louisiana Hayride radio show. Also, his newfound fame brought the band better bookings in larger towns where their act was more acceptable. They added a drummer, D.J. Fontana, and began to appear with well-established country acts, such as the Wilburn Brothers, Faron Young, Ferlin Huskey, Roy Acuff, Kitty Wells, and the Carter Family.

During 1955, Sun released three more Elvis singles: "Milkcow Blues Boogie"/ "You're a Heartbreaker" in January; "I'm Left, You're Right, She's Gone"/ "Baby Let's Play House" in April; and "Mystery Train"/ "I Forgot to Remember to Forget" in August. Like his early records, these singles featured a rhythm-and-blues song on one side and a country-western tune on the other. Elvis was still considered to be a regionally based country-western performer, but his popularity was beginning to soar.

Rhythm-and-blues singer Arthur Gunter had written and recorded "Baby Let's Play House" in 1954, basing it on country singer Eddy Arnold's 1951 hit, "I Want to Play House with You." As an R&B reworking of a country-western song, "Baby Let's Play House" was perfect for Elvis' rockabilly repertoire. Gunter himself had been influenced by rockabilly artists, and he made a good model for Elvis, who had purchased a copy of Gunter's version the previous December at the House of Records in Memphis.

Elvis made the song his own with the inclusion of the syncopated phrasing "babe-babe-baby" in the verse. He also tinkered with the lyrics, changing "You may have religion" to "You may drive a pink Cadillac," a humorous foretelling of the car with which he would come to be identified. Sam Phillips added drums to the recording session for the song, marking the first time drums were used on a Presley single.

As "Baby Let's Play House" received national exposure, trade publications called it a country song, so few people connected it with the relatively unknown rhythm-and-blues artist who had inspired Elvis.

Bob Neal's management may have helped Elvis to break into the national scene, but under his next manager, he virtually exploded into fame. Learn more about Colonel Tom Parker, who became Elvis' lifelong friend and mentor, in the next section.