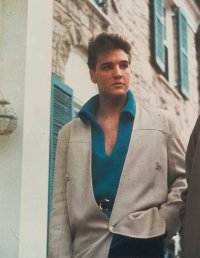 The ever-evolving look of Elvis Presley usually involved bright colors and had its roots in his Memphis influences.

At a time when certain rhythm-and-blues recordings -- most notably, Jackie Brenston's "Rocket 88" -- closely resembled what would soon be known as rock 'n' roll, Elvis began melding the music's sensuous, carefree attitude with the look of a roughneck truck driver: long, greased-down hair and sideburns that were at odds with his invariably polite manners. His appearance garnered much attention, and some of the rougher boys at school responded by threatening to beat him up and cut his hair.

One legend that has been passed around for many years is that Elvis was even kicked off the school football team for refusing to change his look by cutting his long hair. The truth of the matter was much less dramatic.

Although Coach Rube Boyce did ask Elvis at one point to get a haircut, Elvis quit the football team of his own accord. In interviews with Bill Burk given for Early Elvis: The Humes Years, both Coach Boyce and Assistant Coach Malcolm Phillips recalled that Elvis quit the team because he got an after-school job.

Shortly after he left the team, Elvis began to wear what would later become his trademark flashy clothes -- usually an eye-catching combination of pink and black -- that he bought with the earnings from his part-time job as an usher at Loew's State Theater on South Main Street.

As Elvis' passion for music became all-consuming, his schoolwork faltered. An assortment of A, B, and C grades during his freshman year at Humes had degenerated to the point where he was a straight-C student. He spent much of his free time going to the movies and hanging out in record stores.

He also attended all-night gospel singing sessions with his parents at the Ellis Auditorium, where he would observe some of the more extroverted performers' animated stage movements. Gospel encapsulated the spirituality and physicality that was at the center of Elvis Presley's musical style, yet when he sang and played guitar at parties he was more likely to croon a pop number by Dean Martin, Bing Crosby, or Perry Como.

By the end of 1952, the Presleys' combined income exceeded the maximum allowed by the Memphis Housing Authority, so the family moved from Lauderdale Courts to a rooming house on nearby Saffarans Street, and then an apartment at 462 Alabama Street, opposite the Courts. Though the Presleys were forced to leave the housing project, they chose to remain in the same neighborhood. However, Elvis was about to move in a new direction.

In April 1953, a couple of months before he graduated from high school, Elvis performed in Humes' annual Minstrel Show. Sixteenth on a 22-act bill, listed in the program as "Elvis Prestly," he shocked pupils, parents, and teachers alike with his performance of Teresa Brewer's "Till I Waltz Again with You."

It was a seminal moment. Like a scene out of one of his future movies, Elvis set aside his own shy personality in favor of a popular and animated persona, and the peculiar-looking young man began to attract the attention of his peers like moths to a flame.

After graduating from L. C. Humes High School, Elvis went to work for M. B. Parker Machinists -- hardly the stuff of legends. However, the fates were conspiring in his favor, the pieces were falling into place, and soon all of Elvis Presley's dreams would come true. He was about to make his first recording, and to make history. See the next section to learn more about Elvis' first recording.