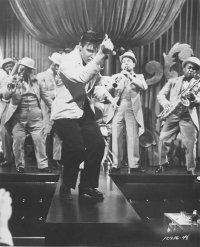 Elvis Presley's next movie, King Creole, was produced by Hal Wallis for Paramount. Based on Harold Robbins's novel, A Stone for Danny Fisher, this musical drama stars Elvis as troubled teenager Danny Fisher. Dean Jagger costars as Danny's father, a man who has fallen apart emotionally since the death of his wife, letting his family slip into dire poverty.

Determined to help his family regain the security and status it once had, Danny quits school to earn money by sweeping floors in a nightclub. A local mobster, played by Walter Matthau, takes an interest in Danny after he hears the talented young man sing. Danny becomes a regular performer in the mobster's club, packing in the crowds with his explosive performing style. But Danny seals his tragic fate when he becomes romantically involved with the mobster's girl.

Wallis had other intentions for this property when he first purchased it in 1955. At that time, a play version of A Stone for Danny Fisher was running off-Broadway, and Wallis may have originally intended the title role to go to Ben Gazzara, with more of the novel left intact.

Rumor has it that James Dean was also considered as a possibility for the role. When Wallis decided to use Elvis for the part of Danny Fisher, the original storyline had to be changed to accommodate Elvis' rock 'n' roll image. The setting was changed from New York City to New Orleans, although few characters other than Elvis speak with Southern accents. In the novel, Danny is an aspiring boxer; in the movie, he's an exciting young singer with a new sound.

Both Wallis and Paramount considered this movie to be an important project. The supporting cast features many notable actors, including Carolyn Jones, Dean Jagger, and Walter Matthau, and the director was respected veteran Michael Curtiz, who made Casablanca, Yankee Doodle Dandy, Angels with Dirty Faces, and many other Hollywood classics.

The high-quality production values plus the care taken in selecting the cast and crew paid off, because King Creole earned Elvis his best movie reviews. Many critics agreed that Elvis had improved tremendously as an actor, while others noted that he was "no longer depicted as the churlish, egotistical singing idol."

King Creole was shot in part on location in New Orleans. The film made effective use of such local sites as the French Quarter, Lake Pontchartrain, and a local high school. During location shooting, Elvis had a major problem with fans mobbing him at the Roosevelt Hotel, where he was staying. Hal Wallis arranged for heavy-duty security so Elvis could get enough rest to look fresh on camera.

Pinkerton guards patrolled the hallways, the elevators, and even the fire escapes of the hotel to keep well-intentioned but troublesome fans away. When he returned to his hotel in the evening, Elvis had to go to the top of an adjacent building, cross over the roof, and enter the Roosevelt by way of a fire escape. He was unable to enjoy New Orleans' celebrated nightclubs or famous restaurants because of the persistence of his fans.

Shooting in the city's streets was even worse; city policemen had to be used for crowd control. By this time, Elvis Presley had entered a new phase of his career that would keep him in seclusion, away from the fans who not only made him a star but also made him a recluse.

Elvis' first four movies are nothing like his later musical comedies. Aside from Love Me Tender, the plots of his early movies echo aspects of Elvis' image or actual events in his life. Loving You was a conventional Hollywood treatment of Elvis' rise to fame. Jailhouse Rock capitalized on Elvis' sensual, bad-boy image, and King Creole made use of certain details that paralleled Elvis' own life. In these movies, Elvis was clearly being groomed to take over for actor James Dean, who died in September 1955.

Elvis appealed to teenage audiences in much the same way as Dean and the young Marlon Brando. An article in Photoplay magazine, published during the shooting of Love Me Tender, indicated that David Weisbart, the producer of Dean's best-known movie, Rebel Without a Cause, was talking to Elvis about portraying Dean in a movie biography.

Elvis' role in King Creole had supposedly been offered to Dean. In 1956, a special single-issue magazine called Elvis and Jimmy showed how closely the two young men were linked in the popular imagination. The magazine designated Elvis to take up the fallen hero's leather jacket and become the premier teen rebel.

But instead of a rebel's leather jacket, Elvis surprised the world by donning a uniform and serving his country instead. To learn more about Elvis' time in the army, see the next section.