Elvis Presley Returns to the Stage 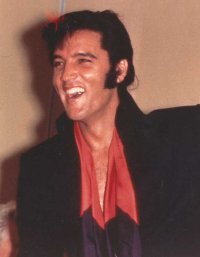 Although Elvis Presley was nervous about performing his show in Las Vegas, he appeared confident.

Elvis was terribly nervous about staging his comeback to live performances in Las Vegas, the city where he had bombed when he appeared at the New Frontier Hotel in 1956. The sting of his failure had not diminished with the passing years.

Although he did have time for several rehearsals before his engagement at the International, he had no opportunity to iron out any kinks before a live audience, which added to his anxiety.

Elvis may have been frightened, but Colonel Parker was in his element as he began promoting Elvis all over Las Vegas. He rented every available billboard and took out full-page ads in the local and trade papers. He filled the lobby of the International with Elvis Presley souvenirs: T-shirts, straw boaters, records, and stuffed animals.

The Colonel made sure that Elvis' return to the stage would be the show-business event of the year. Kirk Kerkorian, then owner of the International Hotel, planned to send his own plane to New York in order to fly in the rock press for opening night.

On July 31, 1969, Elvis performed in front of a sold-out crowd at the International. To the hard-pounding strains of "Baby, I Don't Care," Elvis walked onstage. There was no emcee to introduce him. He grabbed the microphone, struck a familiar pose from the past, and snapped his leg back and forth.

The crowd jumped from their chairs and gave him a standing ovation before he sang one note. The audience of 2,000 began to whistle, applaud furiously, and pound on the tables. Some people stood on their chairs. When the ovation began to subside, Elvis launched into "Blue Suede Shoes" with such fury that ten years of his movie music melted away.

Elvis looked devastatingly handsome that night. He was dressed in a modified karate suit made especially for him out of black mohair. He was thinner than he had been in his last few films, and his blue-black hair reached down past his collar. Elvis' sideburns were the longest they had been since the 1950s.

Never one to take himself too seriously, Elvis joked with the crowd about the old days and the old songs. At one point, he decided to dedicate his next number to the audience and the staff at the International: "This is the only song I could think of that really expresses my feeling toward the audience," he said in all earnestness, before bursting into "Hound Dog."

Elvis closed his act with "What'd I Say" from Viva Las Vegas, and again the sold-out crowd gave him a standing ovation. Elvis came back for an encore and sang "Can't Help Falling in Love," the song with which he closed every show for the rest of his career.

Backstage after the performance, many celebrities and well-wishers, including Cary Grant, were on hand to congratulate Elvis on his triumphant return to live performing. Priscilla Beaulieu Presley, in her account of her life with Elvis, reveals a touching story about Colonel Parker. At this moment of great personal and professional triumph for his one and only client, the Colonel pushed his way backstage.

Everyone could see that tears were welling up in his eyes. Where was "his boy" he wanted to know. As Elvis emerged from his dressing room, the two men embraced, too overcome with emotion to say anything. There have been many stories about Colonel Tom Parker over the years, many of them illustrating his greed, his mistakes, or his ruthlessness, yet none reveals the complexity of the relationship between Elvis and the Colonel like this one.

Most members of the rock 'n' roll press, of whom many were teenagers when Elvis began his career, felt ecstatic about his return to the stage and expressed their enthusiasm in glowing reviews. Rolling Stone magazine declared Elvis to be "supernatural," while Variety proclaimed him a superstar.

The next day, the Colonel sat down with the general manager of the International to discuss the enormous success of Elvis' performance. The hotel offered Elvis a five-year contract to play two months a year -- February and August -- at a salary of $1 million dollars per year.

In his typical flamboyant style, the Colonel took out a pen and began scribbling specific terms on the red tablecloth. When he finished, he asked the general manager to sign the cloth to close the deal. The "red tablecloth deal" has become a show business legend, although Parker drew criticism for locking Elvis into a long-term contract that didn't take inflation into account.

Six months after his first Las Vegas show, Elvis returned to the International for another month of sold-out performances. During this engagement, Elvis wore a jumpsuit on stage. Bill Belew, who had designed the black leather outfit for the comeback TV special, designed a white jumpsuit for this occasion. The costume was slashed down the front to reveal the chest, fitted closely at the waist, and belled out at the legs, which was the fashion of the day. The costume's high collar was inset with semiprecious jewels, and Elvis wore gold and diamond rings on the fingers of both hands. A macramé karate belt made of gold- and pearl-colored strands accentuated his slender waist.

Dean Martin attended the opening night of Elvis' second Las Vegas engagement. Elvis sang "Everybody Loves Somebody Sometime" as a tribute to Martin, the pop singer he had always admired. Elvis altered his repertoire for this engagement by emphasizing his current recordings and including some contemporary country and rock ballads.

He limited the older material to a few key places during the show, or he covered it in a medley-style arrangement. He was determined not to rest on his laurels so he focused his act on his new material and his new sound, which he had developed with the help of Chips Moman at American Sound Studios.

The success of Elvis' comeback was probably enhanced by the 1950s music revival that began in the late 1960s. Many performers who had helped to develop the rock 'n' roll sound and attitude reaped the benefits of this renewed interest in the roots of rock music. Bill Haley and the Comets, Chuck Berry, and Jerry Lee Lewis were touring once again and attracting large crowds.

Elvis not only benefited from the rock-nostalgia craze but also undoubtedly influenced it. Yet, Elvis carefully kept his material new and varied. He didn't identify himself with the rock 'n' roll revival, and his show was never considered to be an oldies act.

Rejuvenated in his professional career, Elvis had also been experiencing a time of personal growth and change in his private life. In 1967, Elvis had married longtime girlfriend Priscilla Beaulieu. See the next section to learn more about Priscilla Presley, Elvis' wife.