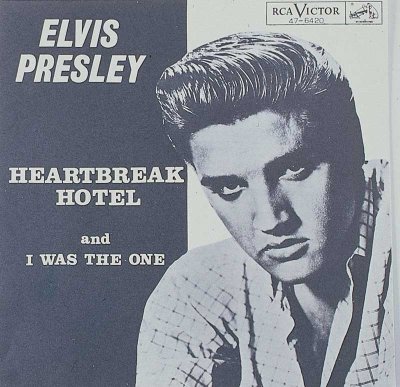 "Heartbreak Hotel" was the first Elvis Presley single to be released by RCA Records.

The Colonel's pursuit of the big time for Elvis -- his sole client -- began with a search for a recording contract with a nationally based company. Columbia and Atlantic expressed interest in the unusual new singer, but the Colonel had several contacts at RCA Victor, making a deal with this company preferable.

In November 1955, Sam Phillips sold Elvis' contract to RCA Victor for $35,000, plus $5,000 in back royalties he owed Elvis. It was the largest amount paid for a single performer up to that time. Steve Sholes, RCA's premier A&R (artist and repertoire) man, had helped sign Elvis to the label. Sholes oversaw the company's specialty singles, which included country-western, gospel, and R&B, so he served as the producer of Elvis' first recordings for RCA.

Moving to RCA was a major step in Elvis' career and a major investment for the company; at the very least, it meant going national and international in promotion and distribution. Sholes was aware that the executives at RCA were closely watching their unusual new artist, who didn't fit into any of the company's existing categories of music.

RCA re-released Elvis' Sun singles in December 1955; the reissue of "Mystery Train" did not sell well. Then the company arranged for Elvis to begin recording new material in Nashville the next month. Chet Atkins, RCA's head man in Nashville, organized the sessions, which started on January 10, 1956.

Scotty Moore and Bill Black, who had worked with Elvis on the road and at Sun from the beginning, accompanied Elvis as usual. D.J. Fontana, who played with Elvis on tour, checked in as Elvis' drummer, although he had never recorded with the trio before. Atkins played rhythm guitar, Floyd Cramer was added at the piano, and gospel singers Ben and Brock Speer of the Speer Family and Gordon Stoker of the Jordanaires provided backing vocals.

Moore and Black, who were used to the down-home atmosphere of Sun, found the detached, professional air at the RCA sessions intimidating, while Sholes was unsure of how to duplicate Elvis' Sun sound. Stoker was unhappy because the rest of the Jordanaires had not been asked to join the session. In fact, everyone was nervous or unsettled except Elvis, who attacked his first number, Ray Charles' "I Got a Woman," with everything he had. In effect, Elvis performed the song while he recorded it, which so impressed the typically cool Atkins that he called his wife to come down to the studio because "it was just so damn exciting."

"Heartbreak Hotel" was the second song Elvis recorded that day in January, and it became the first record he released on his new label, RCA.

Elvis had come across the song -- written by Gainesville songwriters Mae Boren Axton and Tommy Durden -- at a Nashville disc jockey convention the previous November. Durden had gotten the impetus for "Heartbreak Hotel" after reading a newspaper article about the suicide of a young man who had left behind a bitter note that read simply: "I walk a lonely street."

Axton had asked Gainesville singer Glen Reeves to record the demo and emulate Elvis' style, and Elvis copied the vocal intonations of Reeves for his recording. This story shows that Elvis' style was familiar enough to be recognized as his at the time. It also illustrates Elvis' pattern when recording a demo. He copied the interpretation of the demo singer whenever he recorded his version of a song.

"Heartbreak Hotel" borrowed the echo sound that was associated with Elvis' Sun releases, perhaps even exaggerating it. The effect is eerie, downright ghostly, especially during the opening lines to each verse when Elvis sings without accompaniment. His voice is penetrating, and the sound is despondent, perfectly capturing the alienation of disaffected youth.

Steve Sholes was disconcerted by Elvis' off-handed, instinctual approach to recording, in which he sang a take, played it back, discarded it, and then sang another, repeating the process until he felt he had captured the tune. Elvis did not read music, nor did he have any professional experience at arranging it. He just instinctively knew what to do and when to do it. RCA executives in New York were also troubled with the Nashville session. The recordings did not sound as much like Elvis' Sun records as they had wanted, and the two ballads were nothing like his previous releases.

A second recording session was arranged in New York, in which Elvis covered Carl Perkins' "Blue Suede Shoes" and Little Richard's "Tutti Frutti." This time only piano player Shorty Long was used in addition to Scotty, Bill, and D.J., and the focus was on explosive rock 'n' roll numbers. Seven tracks from the Nashville and New York sessions were chosen for Elvis' first long-playing album, Elvis Presley. These were combined with five songs previously recorded at Sun but never released. Interestingly, "Heartbreak Hotel" was not included on the first album.

Released on March 13, 1956, Elvis Presley sold over 360,000 copies by the end of April. At $3.98 per album, this made it RCA's first million-dollar album by a single artist. Elvis Presley also became the first album in music history to sell over a million copies. It reached No. 1 on Billboard's Top LPs chart, and launched an unprecedented five extended-play (EP) albums.

After his first successful full-length album, Elvis began to change his sound as he continued his growth as an artist. Learn more about the evolution of Elvis' sound in the next section.