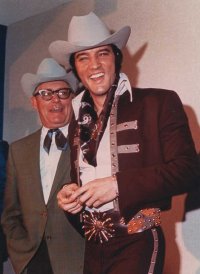 Dressed for the occasion, Elvis Presley held a press conference before his Houston engagement.

Following his success in Las Vegas, Elvis took his act on tour. For Elvis' first show on the road, Colonel Parker arranged for him to appear in the Houston Astrodome in conjunction with the Texas Livestock Show.

The logic behind choosing such a large arena was simple: Elvis, "the World's Greatest Entertainer," should appear only in magnificent coliseums or showplaces.

Besides, Texas had always been good to Elvis. In 1955, East Texas had been the scene of a great surge of Elvis-mania, which helped boost his early career. To return this kindness and perhaps to ensure a sellout, tickets for Elvis' engagement at the Astrodome were greatly reduced in price, with some seats selling for as little as one dollar.

Despite his boost in confidence from the Las Vegas victories, Elvis was overwhelmed by the size of the Astrodome and the thought of having to please 44,500 people. Referring to the Astrodome as an "ocean," he worried about losing some of his energy and dynamism in such a vast arena.

Again his fears proved unfounded because the Astrodome sold out each night of his engagement, and the local music critics raved about his personal charisma and his exciting act. For the first time since the 1950s, Elvis was swarmed after his show in a frightening example of mob hysteria. His limousine had been parked by the stage door so he could make a rapid getaway, but the fans were able to reach the car quickly. They surrounded the vehicle; some tried to shove flowers and gifts into the doors and windows while others just wanted to touch their idol.

After winning Houston, Elvis continued to tour. He was usually on the road for several weeks out of a month, in addition to playing Las Vegas in February and August. His touring schedule was grueling. By 1971, Elvis was on the road more than most other acts in show business.

Elvis would tour for three weeks at a time, taking no days off and doing two shows on Saturday and Sunday. He would rest for a few weeks and then repeat the cycle. Elvis usually played one-night stands, meaning every performance was scheduled for a different arena. Often Elvis and his entourage would arrive in a city and depart again in less than 24 hours.

Such a demanding schedule took its toll in terms of Elvis' desire to update or change the material in his act. Eventually, his performances became standardized, even routine. Despite this, Elvis' concerts were almost always sold out.

During the final Houston show, Elvis experienced problems with his eyes. Upon returning to Memphis, he checked into Baptist Memorial Hospital where he was diagnosed with glaucoma, a serious eye disease that can eventually result in blindness.

Elvis became consumed with an irrational fear that he would be blind by the end of the year. He grew morose, irritable, and reclusive. It took six months for his doctor, his family, and his friends to convince him that his case was treatable. His overreaction to his ailment seemed partly a result of the fatigue and nervousness associated with a demanding schedule.

Touring and performing in Las Vegas became the basis of Elvis' career during the 1970s. These engagements of 57 or 58 shows generally lasted about one month, a schedule equally as exhausting as being on the road. Plus, the pressure of performing live was as draining as the physical nature of the performances, resulting in sleeplessness, bouts of depression, and exaggerated emotional responses.

Little of this showed in his performances during the early 1970s, and those who saw him on stage marveled at the excitement he generated in his audiences. Indicative of his stage show during this time period is the Elvis: Aloha From Hawaii concert, which was not only televised but also recorded and released on an album titled Aloha From Hawaii via Satellite. The album hit the top spot on Billboard's album chart, remaining on the charts for 52 weeks. It was Elvis' last album to reach No. 1.

To learn more about Aloha From Hawaii, see the next section.