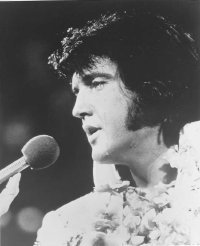 Aloha From Hawaii captures Elvis Presley at one of the best moments in this phase of his career.

Taking advantage of advances in global communications, Elvis: Aloha From Hawaii was beamed by the Intelsat IV satellite to countries all over the world on January 14, 1973. Broadcast at 12:30 a.m. Hawaii time, the special was seen in Australia, New Zealand, the Philippine Islands, Japan, and other countries in the Far East. Even parts of Communist China supposedly tuned in. The next day, the show was rebroadcast to 28 European countries.

The special consisted of a concert performance by Elvis in front of a live audience at the Honolulu International Center Arena. After the audience left the arena, Elvis was filmed singing five more songs, which were to be included in the U.S. edition of the concert.

However, NBC's broadcast of the show on April 4 included only four of the additional songs. The American broadcast of the special was watched by 51 percent of the television viewing audience, more than the number of people who watched the first walk on the moon. When it finished airing around the world, Elvis: Aloha From Hawaii was seen in 40 countries by at least 1 billion people.

On January 12, Elvis did a full dress rehearsal that was not televised. After seeing a tape of this performance, he decided he needed a haircut. The difference in hairstyles provides a way for the Elvis fan to distinguish between photos of the rehearsal and photos of the special. Both shows were a benefit for the Kuiokalani Lee Cancer Fund and raised about $75,000. Lee was a Hawaiian composer who had died of cancer, and Elvis performed Lee's song, "I'll Remember You," in his honor.

Elvis sang a variety of songs throughout the concert special, including his current hits, "Burning Love" and "Suspicious Minds," and past hits "Hound Dog," "Love Me," and "A Big Hunk o' Love." He also sang "My Way," "Steamroller Blues," and other pop and rock tunes, as well as the moving country classic "I'm So Lonesome I Could Cry." During the course of the evening, he doffed his magnificent cape, and later, while singing "An American Trilogy," Elvis tossed his studded belt into the audience.

"A live concert to me is exciting because of all the electricity that is generated in the crowd and on stage. It's my favorite part of the business -- live concerts," Elvis proclaimed at a press conference prior to Aloha From Hawaii.

For the finale, Elvis sang his standard closing number, "Can't Help Falling in Love," that built up to the large-scale sound typical of his style of that era. By the time this number began, Elvis had resumed wearing his cape, which typically signaled the end of the show for his band and the audience.

Usually, he concluded the number by dropping to one knee in the spotlight, grabbing the ends of his cape in his hands, and spreading the garment out behind him -- a grandiose gesture befitting the World's Greatest Entertainer. On this night, he added an extra touch by throwing the gem-laden cape into the crowd, where it was caught by a lucky fan. As the orchestra reprised "See See Rider," Elvis left the stage. As usual, he did not return for an encore. It was simply too hard to top the effect of such sublime imagery.

Aloha From Hawaii featured many of the elements -- such as the jumpsuit and energetic performance style -- that were hallmarks of Elvis' concerts in the 1970s. To learn more about Elvis' particular brand of entertainment, see the next page.