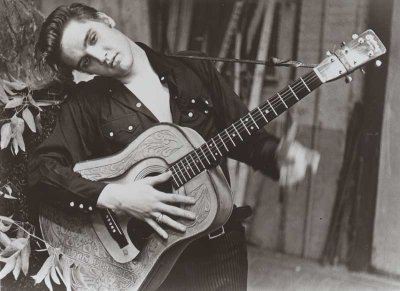 In the young Elvis Presley, producer Sam Phillips found exactly the groundbreaking sound he was looking for.

The story of Elvis Presley's discovery begins with a shy, 18-year-old Elvis entering a recording studio in 1953 to cut two songs on an acetate disk at a cost of four dollars. The Memphis Recording Service was owned and operated by Sam Phillips, who had been recording rhythm-and-blues artists since 1950. By the time Elvis came to the recording studio, Sam Cornelius Phillips was known as Memphis' most important independent record producer. He had opened Sun Records in 1952 to record both rhythm-and-blues (R&B) singers and country-western artists.

Phillips enjoyed a national reputation for discovering such talented R&B artists as Rufus Thomas and Junior Parker. Phillips recorded these performers for independent record companies in other parts of the United States, including Chess Records in Chicago and the Modern label in Los Angeles. Phillips financed the recording sessions, paid the musicians, recorded the artists himself (often serving as the studio engineer), and then leased the master recordings to other record companies. His reputation was built on his recordings of blues performers, but he had just begun to work with country singers when Elvis walked into his recording studio for the first time.

Rock 'n' roll folklore relates a different version of Elvis' first trip to the Memphis Recording Service. According to older, more sentimental accounts, Elvis was a talented but inexperienced singer who simply wanted to make a record for his mother's birthday. Because Gladys' birthday was in April, the timing in this version of the story is not correct, because Elvis cut that first acetate disk in the late summer of 1953. It's more likely that Elvis knew of Sam Phillips' reputation as an independent producer and came to the Memphis Recording Service to catch his attention.

Unfortunately, on the day that Elvis decided to stop by, Phillips was not there. His tireless secretary and assistant, Marion Keisker, was running the recording studio alone. She noticed Elvis' flamboyant clothes and his long, slicked-back hair and engaged him in conversation. Marion asked Elvis what kind of music he sang and who he sang like. His prophetic answer, "I don't sound like nobody," piqued her curiosity, and while Elvis was singing "My Happiness" by the Ink Spots for his acetate record, Keisker also taped him so Phillips could hear him later.

In the early 1950s, rhythm-and-blues had evolved from a combination of urban blues and swing. It was called "race music" because R&B musicians were predominantly African American. Phillips firmly believed that the rhythm-and-blues sound could win a mass audience. He knew that white teenagers in Memphis were listening to R&B, and he suspected this to be true in other parts of the country as well. Phillips had been known to proclaim, "If I could find a white man who had the Negro sound and the Negro feel, I could make a billion dollars." According to Marion Keisker, it was a widely known statement.

Elvis' second song for the flip side of the acetate was another Ink Spots song, "That's When Your Heartaches Begin." His choice of material -- two songs by the Ink Spots, an established R&B group -- suggests that Elvis may have known of Phillips' statement and was hoping the producer would take notice. Phillips listened to the two songs by the unknown singer but did nothing about them, even though legend has it that Elvis' natural talent immediately blew Sam Phillips away.

Years later, after Elvis had become a major star, Phillips changed the story a little. He claimed that he was the person behind the desk at the Memphis Recording Service on that landmark day. To support his claim, Phillips pointed out that Keisker didn't know how to operate the recording equipment, so he was the only person who could have recorded Elvis. But Marion Keisker has told her account of the event many times in print and during television interviews, and, as far as anyone knows, Elvis never disputed her version.

It wasn't until Elvis went back to the Memphis Recording Service that Sam Phillips and Sun Records really took notice. Learn more about Elvis' early relationship with Sun Records in the next section.