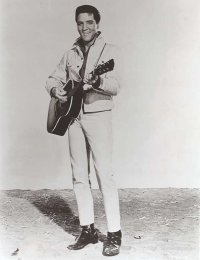 Elvis' musical comedies were relatively inexpensive to produce but always profitable, so Hal Wallis often used them as collateral for financing more prestigious movies. The potential profits from Roustabout were enough of a guarantee for investors to back Wallis's production of Becket, which later won an Academy Award for best adapted screenplay. After Elvis stopped making movies, he complained bitterly that this practice had made him feel used.

Kissin' Cousins was the first of Elvis' low-budget movies. After he made this movie, the shooting schedules for his musical comedies seemed to get shorter, and the budgets seemed to get smaller.

Some people say that Colonel Parker thought Elvis' popularity as a movie star was waning, so he began to seek out producers who could lower production costs. He also looked for resorts and hotels that allowed the cast and crew to stay for free. But there's no proof that the Colonel intended to lower the quality of Elvis' movies. The reverse actually may have been the case, and the decline in production values that went along with lower budgets and shorter schedules may have resulted in a decrease in box-office receipts.

Unfortunately, the music in Elvis' 1960s movies was often not as good as it should have been. Elvis averaged three movies per year between 1960 and 1969, and a soundtrack album was released in conjunction with each movie. After 1964, the Colonel insisted that Elvis record only soundtrack albums. Many of the songs written for Elvis' films were done by hacks who worked for Hill and Range, the publishing house associated with RCA Records. The production values of these albums were erratic.

Typically, the songs for a soundtrack album were recorded in two or three all-night sessions. Neither Colonel Parker nor anyone at RCA or Hill and Range was interested in sinking money into securing good material for Elvis when mediocre soundtrack albums were so easy to produce and sold so well. Since the system worked to everyone's advantage, there was no reason to change it.

The albums and the movies promoted each other. The release of a soundtrack album reminded fans that a movie would soon be appearing in their neighborhood theater, while the movie served as a glorious advertisement for the soundtrack album.

Elvis' control of the pop, country, and rhythm-and-blues charts faded during the 1960s. After 1960, Elvis didn't have a song on the country charts until 1968, and after 1963, he never again placed a record on the R&B charts. Elvis was able to coast on his reputation until about 1965. That year, he had only one Top-Ten single, "Crying in the Chapel," which he had actually recorded in 1960. His soundtrack albums placed in the Top Ten but just barely. In 1966, only one of Elvis' singles, "Love Letters," made it to the Top 20. By 1967, none of Elvis' singles or albums charted anywhere near the Top 20.

Elvis' music may have declined in quality, originality, and popularity during the 1960s, but the decline was not as rapid as many claim, nor was all the music written for his films mediocre. He recorded some good songs during that decade, even if they were for the soundtracks of his movies.

Many of the tunes from Viva Las Vegas are comparable to those from his earlier films. Other excellent songs include the title tune from Follow That Dream, "Return to Sender" from Girls! Girls! Girls!, "Rubberneckin'" from Change of Habit, "Wolf Call" from Girl Happy, "Can't Help Falling in Love" from Blue Hawaii, "Little Egypt" from Roustabout, and many more. Although there is little hard-driving rock 'n' roll or rhythm-and-blues in these musical numbers, Elvis' mastery of the pop-rock idiom is smooth and confident.

Unfortunately, these well-written songs tend to get lost on soundtracks that feature anywhere from six to fourteen numbers. There is no escaping the fact that Elvis recorded some clunkers during the 1960s. Among the most ridiculous are "(There's) No Room to Rhumba in a Sports Car" from Fun in Acapulco, "Fort Lauderdale Chamber of Commerce" from Girl Happy, "Queenie Wahini's Papaya" from Paradise, Hawaiian Style, "Yoga Is as Yoga Does" from Easy Come, Easy Go, "Barefoot Ballad" from Kissin' Cousins, "He's Your Uncle, Not Your Dad" from Speedway, and "Petunia, the Gardener's Daughter" from Frankie and Johnny.

RCA did not market or package Elvis' albums very wisely. His soundtrack albums were a hodgepodge of songs that lacked unity and consistency, and the Colonel and the people at RCA were determined to saturate the market by releasing material at an extremely rapid rate. It was not unusual for RCA to release a Presley soundtrack while an earlier one was still on the charts, even though standard practice was to get as much mileage as possible from a performer's album before releasing the next.

Most of Elvis' albums and films secured a profit no matter how hastily they were manufactured. The Colonel continually tied him up with three-film contracts with a number of studios, so even when Elvis decided to stop making movies around 1968, he was contractually obligated to star in several more.

Despite the decrease in box-office revenue for Elvis' films at the end of the 1960s, everyone benefited financially from these vehicles. The budgets of Elvis' films were planned so 50 percent of the total budget was allotted for his salary, and he received a percentage of the profits. Parker received 25 percent of Presley's gross income and whatever he could negotiate as technical adviser, while Abe Lastfogel of William Morris received 10 percent off the top of any film deal.

Colonel Parker understood the key to the financial success of the films when he told a scriptwriter that there were a quarter of a million die-hard Elvis Presley fans willing to see each movie three times. The fans believed that Elvis' charisma transcended any mediocre material he was given. When the lines formed outside the box offices, the people in those lines came to see Elvis and nothing else.

Elvis' career may have been faltering due to this string of mediocre movies and soundtracks. After he decided to stop making movies in the late 1960s, Elvis returned to his first love, music, and began to record quality original material. For more on Elvis' career comeback, see the next section.