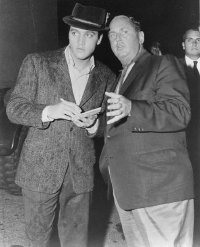 Colonel Tom Parker was Elvis Presley's manager, friend, and mentor for most of his career.

Nearly as legendary as his famous client was Colonel Tom Parker, Elvis Presley's manager. Colonel Parker was mysterious and colorful, and, under his guidance, his one and only client -- Elvis -- reached unimaginable heights.

Elvis added "Baby Let's Play House" and "I'm Left, You're Right, She's Gone" to his act in the spring of 1955. Less than a year later, he sang "Baby Let's Play House" on television for his second appearance on The Dorsey Brothers' Stage Show (February 4, 1956), just as his sensual performing style was beginning to create a national controversy.

If his hip-swinging performance on Stage Show raised eyebrows, then the lyrics to "Baby Let's Play House" added to the provocative connotation. Basically a proposition, the song is a plea from the singer to his girlfriend to return to him because he wants to "play house" with her, a slang term for an unmarried couple living or sleeping together. Despite the singer's plea, he takes a confrontational stance, telling his girl, "I'd rather see you dead than with another man."

In the spring of 1955, Bob Neal booked the Hillbilly Cat and the Blue Moon Boys on a tour with country singer Hank Snow. The tour was organized by Hank Snow Jamboree Attractions, which was owned by Snow but operated by a former carnival barker named Colonel Tom Parker.

Many colorful stories exist about Parker; some are no doubt true, while others have been exaggerated through the years. It's been said that he once covered a hot plate with straw and set baby chickens on top of it to make them "dance" to the tune "Turkey in the Straw." Another carny story tells of Parker painting sparrows yellow and selling them as parakeets.

Parker's country-western experiences included guiding country singer Eddy Arnold's career from relative unknown to star. Parker's title of "Colonel" does not refer to military rank but is an honorary title, which was bestowed upon him by the state of Louisiana in 1953. Later he was made an honorary Colonel of Tennessee as well. Much has been written about Colonel Tom Parker, not the least of which is that he was a very shrewd man.

A large portion of Elvis' audience by mid-1955 was made up of teenage girls. They were extremely enthusiastic during his stage performances, and Elvis learned to play to the girls, teasing them with his body movements and making them scream each time he swiveled his hips. During a summer performance in Jacksonville, Florida, Elvis jokingly invited all the girls in the audience to meet him backstage. But the joke was on Elvis: A swarm of screaming girls chased him all the way to his car and literally ripped most of his clothes off his body.

The incident terrified his mother, surprised the press, and delighted the Colonel, who had begun to monitor Elvis' career quite closely. Parker's position at Jamboree Attractions allowed him to quietly observe the young singer's steady rise in popularity.

As with other important events in Elvis' career, there are many versions of the story about how Colonel Tom Parker became Elvis' sole manager. Parker was supposed to have had a close working relationship with Hank Snow, but when he finally signed Elvis to a contract, Parker did not include Snow in the deal. Parker and Snow broke up their partnership over this matter, but Snow did not sue.

When the Colonel and Elvis signed their first contract in August 1955, Bob Neal still had a contract as Elvis' manager. Parker initially signed on as "special adviser," and his duties were to "assist in any way possible the buildup of Elvis Presley as an artist." Parker was also given the right to negotiate renewals on all existing contracts. At this point, Neal was kept on merely as a courtesy. When Neal's contract expired on March 15, 1956, he was completely out of the picture, and Parker became Elvis' full-time manager for a 25 percent cut.

When Parker began to take part officially in Elvis' career, Elvis was just a country-western singer. Though his style wasn't traditional and many of his most loyal fans were teenagers, Elvis still toured the country-western circuits and performed with other country stars. His records were played almost exclusively on country stations. If Elvis was going to live up to the potential the Colonel saw in him, he was going to have to be exposed to audiences outside the South on a wide scale.

As logical as this seems, the Colonel's plan was actually a bold move. After all, Elvis had never stepped foot outside the South, and northern audiences were unaccustomed to Southern musical traditions and sounds.

The first step in the Colonel's master plan was to find a recording company that could give Elvis national and international exposure. Learn about the development of Elvis' relationship with RCA Records in the next section.