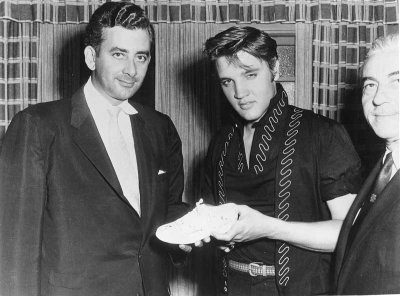 Elvis Presley and merchandiser Hank Saperstein show off an Elvis sneaker, one of many Elvis collectibles. See more Elvis pictures.

From the earliest stages of Elvis Presley's career, his manager, Colonel Tom Parker, hit on collectibles as a way to market his client. In the early days, Colonel Parker arranged for a blitz of products targeted largely at teenage girls as a way to expand and enhance Elvis's image as a rebellious, sexual rocker. The products that bore Elvis' likeness in the late 1950s ranged from lipstick and jewelry to clothing, shoes, even perfume.

As Elvis matured into a bona fide film star in the 1960s and concert legend in the 1970s, his marketing plan was suitably modified, and the difference in the collectibles from the period is noticeable. Instead of being marketed to rebellious youth, Elvis was finally a grown-up, and collectibles like calendars, catalogs, and concert souvenirs reflect the change.

After Elvis' death in 1977, his estate continued to market different collectibles, many as a way to honor the fallen star. The collectibles in this area range from the simple and tasteful to the outrageous.

In the pages of this article, follow the phases of Elvis Presley's career and the collectibles that serve as a snapshot of the period. See the next section to begin by learning about Elvis Presley collectibles in the 1950s.