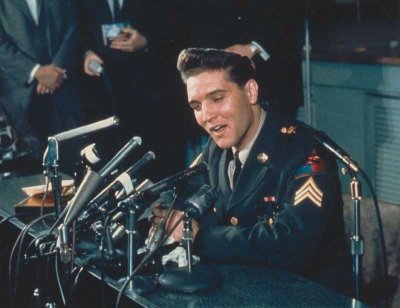 Upon his return from the army, Elvis Presley met with reporters and discussed the next phase of his career.

As soon as Elvis set foot on American soil after his discharge from the army, reporters descended on him with questions about his career. Newspaper interviews revealed that he did not intend to abandon rock 'n' roll "as long as people wanted it." Yet, almost immediately, Elvis and Colonel Parker embarked on a course designed to do just that; they altered Elvis' image by using the same entertainment arenas that had constructed his image in the first place -- recordings, television, and the movies.

Elvis and Colonel Parker were no longer interested in rock 'n' roll, which had changed between 1958 and 1960. If anything, rock musicians were more controversial than ever: Little Richard was in trouble with the IRS; Chuck Berry had been arrested for violating the Mann Act; and Jerry Lee Lewis was ostracized for running away with and marrying a 13-year-old girl. To make matters worse, at least in the eyes of the press, the girl was Lewis's cousin and he was already married at the time. All these scandals served to temporarily put their careers on hold and damage rock 'n' roll's already tarnished reputation.

While scandal claimed some rockers, death claimed others such as Buddy Holly, Ritchie Valens, the Big Bopper (J.P. Richardson), and Eddie Cochran. The loss of these rock pioneers from the music scene contributed to the rise in popularity of ballad singers. As early as 1958, articles in music magazines began to note with pleasure that ballad singers were replacing the more frenzied performers who had been on the charts.

When Elvis returned home in 1960 -- amid headlines blaring "Chorus of Teenage Squeals Rocks Elvis Out of the Army" and "The Army's Made a New Man Out of Elvis" -- the stage was set for him to take up a more mellow style. The Colonel took advantage of the good publicity over Elvis' tour of duty to promote a more mature Elvis who he hoped would attract a larger audience.

Rock 'n' roll critics and fans view this change as a decline, but in reality it was a deliberate change in Elvis' image. Elvis and his manager abandoned the notoriety of rock 'n' roll for the wider appeal of movies and pop music. In terms of financial success and overall popularity, they made the right decision.

A single image sums up the ramifications of this important switch in the young singer's career: Elvis' long ducktail haircut, which had been so ceremoniously shorn for his army induction, was never grown back.

Two weeks after his discharge, Elvis journeyed to Nashville for his first recording session in almost two years. Elvis was joined in the studio by two of his oldest friends, guitarist Scotty Moore and drummer D.J. Fontana. Bill Black, who had played doghouse bass for Elvis, was no longer part of his band. Moore, Black, and Fontana had been Elvis' backup musicians during most of his early career, but in the fall of 1957, Moore and Black resigned as regular members of Elvis' band.

Money probably had a lot to do with their decision as Scotty and Bill were paid only $100 a week while they were in Memphis and $200 a week while they were on the road. It is assumed that the Colonel was responsible for the skimpy wages, but throughout his career Elvis was never known to pay very high wages to any of the people who worked for him.

Black eventually formed his own group, the Bill Black Combo, and in 1959 they recorded an instrumental tune called "Smokie." Moore continued to record with Elvis in the studio on a freelance basis until 1969. D.J. Fontana, who had been recruited from Louisiana Hayride, had a separate arrangement with Elvis, which allowed him more leeway in his career.

Moore and Fontana were not the only musicians hired for the Nashville recording sessions. The famed country pianist Floyd Cramer signed on, and once again the Jordanaires sang backup vocals. During the first session, Elvis cut a single featuring "Stuck on You," with "Fame and Fortune" on the flip side. In early April, Elvis returned to the RCA studio in Nashville to record the additional tracks that were needed to make an album.

By the end of April, Elvis Is Back! had been released. In less than two months, RCA had cut and pressed this brand-new Elvis Presley album, and it was playing on the radio. To learn more about Elvis Is Back!, see the next section.