The Musical Influences of Elvis Presley 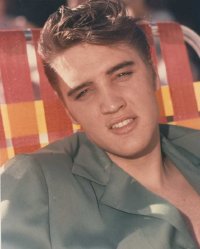 As a youth, Elvis Presley was influenced by diverse musical stylings.

One of the few constants in Elvis' life during his early years was the First Assembly of God Church, where he and his parents sang in the choir, as well as Lawhon Elementary School on Lake Street, which he began attending in the fall of 1941.

Already a loner, used to playing on his own more than with his few friends, Elvis soon learned to read, and he would while away hours on end with his small collection of comic books. He also became reacquainted with his father's absence.

Benefiting from increased work opportunities created by America's entry into World War II, the Presleys relocated to the Mississippi Gulf Coast where Vernon and his cousin Sales found employment in the Moss Point Shipyard near Pascagoula in 1940.

The relocation was short-lived. Missing their family and friends, Vernon and Gladys returned to East Tupelo about a month later. Vernon spent most of 1942 living apart from his family in Mississippi, Alabama, and finally in Memphis, Tennessee, where he worked in a munitions plant while returning to East Tupelo to be with Elvis and Gladys on weekends.

Vernon saved enough money by the war's end to make a $200 down payment on a four-room, $2,000 house on Berry Street. Amazingly, the person selling him the property was none other than Orville Bean, whose altered check had previously landed Vernon in jail.

And shortly afterward it was Bean's daughter, Oleta Grimes, who encouraged Elvis to make his very first public performance, competing in a radio talent contest on Children's Day at the annual Mississippi-Alabama Fair and Dairy Show in downtown Tupelo. Grimes, who also happened to be Elvis' fifth-grade teacher, was impressed by his singing during morning prayers.

Legend has it that, wearing glasses and standing on a chair to reach the microphone in front of several hundred people, Elvis won second place by crooning, without accompaniment, "Old Shep," the Red Foley tearjerker about a boy's dear, departed dog. Elvis' prize supposedly consisted of free passes for all of the rides at the fair plus five dollars.

Research done by Bill Burk for his book Early Elvis: The Tupelo Years has dispelled this myth. Interviews with Elvis' family and friends, as well as comments made by Elvis himself, confirm that he did sing "Old Shep" without accompaniment, and that he did wear glasses for a short time in the fifth grade. However, he did not place second at the fair. He may have placed fifth, but probably did not win a prize.

Elvis' lack of musical accompaniment was soon resolved when his mother bought him a guitar from the Tupelo Hardware Company for his eleventh (or possibly tenth, according to some versions of the story) birthday. Gladys saw it as a cheap and safe alternative to the bicycle that Elvis originally requested. Taught different chords by his Uncle Vester, Elvis began singing and playing in church and on the WELO Saturday Jamboree, a popular radio talent show broadcast from the local courthouse.

The WELO Jamboree brought Elvis his first direct contact with show business. Mississippi Slim, whose real name was Carvel Lee Ausborn, was the star of the show, combining country music with comedy, and he not only backed Elvis on guitar but also taught him new chords and songs. Slim's younger brother, James Ausborn, was in Elvis' class at East Tupelo Consolidated, and sometimes, the boys would visit Slim at the studio of radio station WELO, where he had his own midday show. That way, Elvis would get a further opportunity to gain instruction on what to sing and how to play.

Inspired by the country music he heard on the radio from the Grand Ole Opry every Saturday night, as well as the gospel-flavored sounds ringing around church each Sunday morning, Elvis was filled with a hunger to learn and a yen for hanging around musicians such as Slim, who apparently knew some of the big stars, such as singing cowboy Tex Ritter. Yet no one, including Elvis, could have guessed that he'd already embarked on the path that would lead him to fame and fortune.

In the summer of 1946, unable to afford the payments on their Berry Street house, Elvis and his parents moved out of East Tupelo into the neighboring city of Tupelo, and soon found themselves living on its version of Poverty Row. Mulberry Alley was located opposite Shake Rag, Tupelo's black quarter, and the Presleys' home there was little more than a hovel.

A half-mile away was Milam Junior High School, where Elvis entered sixth grade in the fall. An average student, he was far too withdrawn to make much of an impression on either his teachers or his classmates. Only when he began to bring his guitar to school in seventh grade to play during lunch would that situation change.

In the meantime, Elvis and his family changed addresses as frequently as Vernon changed jobs. Between Vernon's earnings -- although unambitious, he was rarely unemployed -- the pay that Gladys received for working at the Mid-South Laundry, and money from a series of loans, they were able to keep their heads above water, and by the second half of 1947 the Presleys were living on North Green Street, located in a "colored" neighborhood.

Consequently looked down upon by several of his white classmates, Elvis must have also been regarded as an intruder within the local black community, yet he was drawn like a magnet to the music that he heard on the streets, around the churches, and coming out of the clubs and bars. It was earthy, it was wild, and above all, it was exciting, reflecting the participants' colorful clothes, manner of speech, and in certain cases, mode of behavior. For a poor boy with limited communication skills but expansive dreams and an open mind, it must have been an exhilarating experience.

During his teens, the musical and stylistic influences Elvis found in his neighborhood made a real impact in forming his own personal style. Learn more about the teenage years of Elvis Presley in the next section.