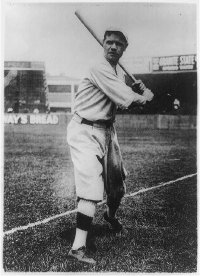 After finishing his first season in baseball's major leagues with the Boston Red Sox, for the winter of 1914, Babe Ruth and his new wife Helen honeymooned in the flat they shared above the saloon where Babe tended bar with his father.

When Ruth reported to spring training in 1915, he was a 21-year-old man, legally freed from the brothers of St. Mary's and ready to crack Boston's deep starting rotation. The prospects ­didn't look good at first, but when rookie righthander Carl Mays went down with an April ankle injury, Babe got the call. After being hammered early in his first start, he lost his second outing 4-3 to the Yankees in a 13-inning contest.

Carrigan was nonetheless impressed with Ruth's aggressiveness and a little something extra -- a home run into the upper right field stands of the Polo Grounds. The 5,000-some onlookers that day were amazed at both its majesty and the ease with which it had been struck. This marked Babe Ruth's first home run in the major leagues.

Red Sox (and Yankee) fans would be getting plenty more of those in the future, but for now pitching was Ruth's main responsibility. Following a 1-4 start, he soon became one of the best in the business. Babe went 17-4 the rest of the way as Boston roared back from a shaky first month to win the AL pennant.

His best pitch remained the fastball, but he had developed a strong curve as well. By watching and talking to veteran hurlers, he was able to improve his control as the season progressed. However rambunctious he got off the field, Ruth was proving a keen student of the game.

Babe's Antics Off the Field

Between games, it was another story. Ruth had a voracious appetite for all life had to offer. Perhaps he was trying to make up for lost time. One could argue that, after living in virtual poverty, he was simply compensating.

It soon became evident, though, that this would not be a passing phase. The frequency and flamboyancy of his escapades set him apart from other ballplayers. This became a common theme in the life Ruth was forming for himself -- whatever he did, he did with gusto.

He drove fast and recklessly, wore flashy, garish suits, and tales of his eating a dozen hot dogs and bottles of pop in a sitting (even indulging on the bench during games) were becoming legend. It was as if he was not sure his good fortune would last. Ruth seemed to be attempting to make up for two decades of neglect as quickly as he could.

As he proved himself on the field, teammates (most of whom weren't choirboys themselves) began accepting Ruth's zest for life and boisterous, sometimes vulgar banter around the clubhouse. Like Jack Dunn in Baltimore, Manager Bill Carrigan tried to curtail Babe's spending sprees by banking his salary (guaranteed for three years) and giving it to him in tiny daily installments -- but the method seldom worked. Ruth respected the no-nonsense Carrigan as he would no other manager, but his fondness for good times went beyond his loyalties to any man, except perhaps Brother Matthias.

There was little time for Carrigan to worry about his wild young star, however; the Sox were in the middle of a furious pennant race with the Detroit Tigers that would go down to the wire. Taking first place in July, Boston at one point won 15 of 18 but barely gained ground on Detroit.

A late-September series between the clubs at Fenway was expected to decide things, and the Red Sox won three of four -- Ruth claiming a 3-2 victory in the all-important final game. Boston wrapped the pennant up shortly thereafter.

The finish overshadowed another aspect of Babe's play that had been gaining momentum and attention that summer: his power. Ruth was evolving into an individual who radiated a magnetic exuberance, and his proficiency in hitting balls long distances fit right in with his character.

It was an act fans had not seen in some time; the home run had not been a significant part of the game in decades. In fact, the league leaders in this category rarely had more than a dozen.

Baseball was in its so-called dead-ball era, when batting averages hovered around .250 and steals, hit-and-run plays, and bunts were the preferred offense. The baseballs used in the games were scuffed, dirtied, and greased up by pitchers (the spitball was not outlawed until 1921) and were often left in games long after they had grown threadbare or water-logged.

Perennial batting champ Ty Cobb -- a .367 lifetime hitter who stole as many as 96 bases in a season -- was the game's greatest star during this period despite never hitting more than nine home runs before 1921.

Cobb's maniacal mastery of the base-by-base, low-scoring "inside" baseball included spike-first slides, but with a $20,000 contract, he had plenty of men trying to emulate it. There seemed no real reason to believe the game was due for change, but eventually -- albeit gradually at first -- Ruth would change it.

No statistics for home runs were recorded in newspapers during 1915, but if there had been, Red Sox fans would have seen Ruth's name atop their team list with four (the rest of the club altogether had totaled just 10). Babe's flowing, upward stroke was a rare sight in a league of level swingers hoping just to make solid contact.

When he connected, the ball was apt to go far. He hit only the second homer to ever reach the distant right field bleachers of Fenway Park, and his final shot of the year in St. Louis completely left Sportsman's Park before bouncing across a street and reportedly breaking the plate-glass window of an automobile dealership 430 feet from home plate.

Teammate Joe Dugan said that Babe "swung from Port Arthur, Texas, on every pitch." One of the reasons for such force was the sheer brawn of the man supplying it. The average major leaguer of the time stood around 5' 9" and weighed under 170 pounds; at 6' 2" and 190 pounds, Ruth had a dramatic, imposing presence on the field. He had huge shoulders and arms, a firm chest, and tiny, splintery legs that made him appear almost cartoonish while running.

He could run, however, and run well; the massive belly and slow gait that modern fans have come to accept as a standard part of his physique would come much later.

How did Babe fare during the 1915 regular season? Click to the next section for a look at the Babe's 1915 baseball stats.