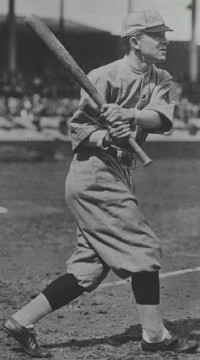 With the 1920 baseball season underway, the New York fans just couldn't get enough of their new player, Babe Ruth.

July 9 was declared "Babe Ruth Day" at the Polo Grounds, and after receiving a diamond-studded watch fob from a local Knights of Columbus chapter, the honoree homered and tipped his cap to the presenters while rounding the bases.

Huge crowds met the Yankees in every park around the league, including record throngs in five of the seven AL cities. The fans ranged from small children to great-grandfathers, but all wanted the same thing: to see Babe hit one out. He had become quite the showman on the field of play.

In St. Louis, three cowboys approached Babe in the Yankee locker room, telling him of how they had ridden on horseback three days to reach a Wyoming railroad station and a train headed for Missouri. "Baby Ruth," one supposedly told him, "I'd have ridden on horseback all the way to St. Louis to see you hit them home runs."

One Washington man apparently took the excitement a bit too far and dropped dead of a heart attack following a Ruth homer. The thrill of seeing the Bambino also held an immense and universal appeal for children across the land. Wherever he went, Babe seemed to be surrounded by kids.

Pitchers were booed by their home crowds when they walked the visiting batsman, but this appeared to be the only way to stop him. Many of Ruth's bases on balls were intentional, although this was not yet a recorded statistic.

When this practice increased later in the season, Yankees manager Miller Huggins attempted to stop the trend by moving Babe from fourth to third in the order and placing young slugger Bob Meusel at cleanup.

The results were often mixed. On July 11, Ruth homered against Howard Ehmke of Detroit, but in three other at bats was walked on four straight pitches. In the course of the entire game, he swung the bat twice.

Even when Ruth failed to get many licks, the Yankees proved capable of winning. The addition of Carl Mays to the pitching staff (where the right-hander quickly became the ace) had given the team an exceptional four-man rotation that also included 20-game winner Bob Shawkey (the AL ERA champ), Jack Quinn, and Rip Collins. Ernie Shore was still around for a spot start when needed.

First baseman Wally Pipp was one of the league's most consistent batsmen, Muddy Ruel a promising catcher, and steady Del Pratt, Roger Peckinpaugh, and Aaron Ward rounded out the infield.

Ping Bodie (back from his brief hiatus) and Duffy Lewis were veteran outfielders, and Meusel, a powerful rookie, provided the club with its second most dangerous power hitter. Before Ruth even joined the team, the starting lineup had been dubbed "Murderer's Row" by a newspaper cartoonist.

Still, Babe far outshined them all. On July 15, he tied his record of 29 home runs with a blast at the Polo Grounds off Bill Burwell of St. Louis and four days later set a new record three times with a trio of shots in a doubleheader against the White Sox.

He had 37 homers through July, and these feats plus an extremely tight American League pennant race between New York, Chicago, and the Cleveland Indians helped the Yankees draw nearly 200,000 -- an unheard-of figure -- during a seven-game homestand late in the month.

The battle stayed close through the ensuing weeks. When the Indians visited New York for a three-game series starting on Monday, August 16, they were only four percentage points ahead of Chicago and a half game in front of the Yanks.

A soft rain fell early on, and Cleveland held a 3-0 lead when Indians shortstop Ray Chapman stepped up to face Mays leading off the fifth inning. Leaning over the plate in his usual crouched stance, Ray took a ball and then awaited Mays's second offering. Throwing out of the underhand windup that had already carried him to an 18-8 record, Mays delivered a fastball high and inside that seemed to paralyze Chapman.

It struck Chapman in the left temple so hard that when it bounced toward the pitcher, backstop Muddy Ruel picked it up and fired it to first, thinking he had made the first out of the inning. When Chapman fell sort of in a sitting/sprawling position inside the batter's box with blood oozing from his ear, Ruel knew something was wrong. A doctor was then summoned from the stands.

As Ruth watched from the outfield, Chapman managed to get to his feet. Unable to speak, he was brought to the visitor's clubhouse at the Polo Grounds. The doctor determined emergency surgery would be necessary to relieve pressure on his brain.

There was still baseball to be played, and it wasn't until after the Yankees missed their chance to take over first place in the standings with a 4-3 loss that the players were told Chapman had been taken to St. Lawrence hospital. Doctors operated later that night, but at 4:40 the next morning, Chapman died of an intercranial hemorrhage. He was the first (and thankfully the only) major leaguer killed by a pitch.

The Yankees postponed Tuesday afternoon's game, then split two 4-3 contests (Ruth slugging his 43rd homer) to remain one and a half games out. Opposing players and sportswriters began calling for the banishment of Mays -- who already had a reputation for scuffing up balls and pitching tight -- but he stayed with the club and won eight games down the stretch to help New York briefly take over first.

Ruth also rebounded from hitting just six August homers to hit 10 homers over his final 24 games, marking one of the best power surges of his career. Regardless of the Babe's efforts, however, the Yankees stumbled on their final western swing. When all was said and done, they would finish three games back.

Even in defeat, however, there was some fun in store for the final days of the campaign as the Yankees were accompanied on their last roadtrips by Brother Matthias and a band comprised of youngsters from St. Mary's. The boys were hoping to raise money to rebuild the institution after a ravaging fire in April 1919.

When Ruth arranged to have them come along to Cleveland, Detroit, and Chicago, the school netted over $13,000 in donations. Babe did his part by contributing $4,100 (a fifth of his salary) to the cause and routinely pleasing photographers by wielding a tuba and posing with the group.

It was a colorful way to end a stupendous summer. A Yankee pennant would have to wait at least another year despite a franchise-best 95-59 record, but New York's baseball revolution had already begun. Just how dominating was Ruth's season?

His final tally of 54 home runs was higher than the total of 14 of 15 other major league teams (the Phillies had 64). All told, he stroked one of every seven homers hit in the AL that year. League runner-up George Sisler had just 19 homers; National League champ Cy Williams a mere 15. In fact, only 15 major leaguers hit as many as 10 homers that season. Far more than even in his incredible 1919 season, Babe had set power standards the likes of which baseball had never seen.

His other numbers were similarly imposing. He led the AL with 137 RBI and 158 runs, hit .376 (fourth in the league), and had 36 doubles, nine triples, and 14 stolen bases (further proof there was a strong, intelligent athlete at work).

His slugging percentage of .847 set a major league record, and no other player has ever come within 75 points of the mark. The banishment of the "spitball" and other trick pitches was cited as a reason for Ruth's fantastic success, along with unsubstantiated rumors of a "juiced up" ball that saw league averages rise dramatically over the previous year.

In reality, what Babe Ruth did went beyond explanation. For the crowds that packed the Polo Grounds all year, the reasons didn't matter anyway. They simply loved what they were seeing, and the Yankees wound up more than doubling their attendance. In fact, they drew a major league record 1,289,422 fans, becoming the first team to ever go over one million.

Seven other major league teams set attendance records on the season, much of the credit going to Ruth. In an era of giants like Ty Cobb, Walter Johnson, and Tris Speaker, the Babe was the most popular player in the game and the biggest drawing card in all of sports.

Thinking himself no longer quite so naive, Ruth was ready to capitalize on his popularity. He earned several thousand dollars in a series of exhibition games following the season, then signed on with John McGraw for a barnstorming tour of Cuba with a team comprised mostly of Giants players. He took Helen along for the trip and made anywhere from $25,000 to $40,000 for the games.

However, when he discovered he liked the excitement of putting money on the nose of a horse, he ended up tossing at least that much away. Varying accounts intimate that he was set up by swindlers claiming "insider information," but whatever the case, Babe enjoyed himself. He weighed 240 pounds by the time he came home and was ready to take up right where he left off in the spring.

Ruth was out to prove the season had not been a fluke -- only a beginning. But first he had to deal with financial and legal troubles. Learn more in the next section.