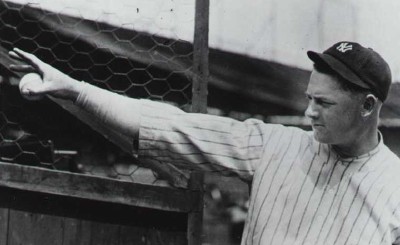 Waite -- or is it Walter? -- Hoyt, the Babe's teammate and fellow pitcher for 11 years

Babe Ruth, the newest Yankee baseball player, bypassed New York on his trip home from California -- where he had been ensconced while the trade to the Yankees unfolded and finalized -- and it was only after getting his wife Helen settled on the farm outside Boston that he got his first taste of the Big Apple.

Meeting up on February 28, 1920, with the rest of the Yankees contingent at Pennsylvania Station just a few minutes before their sleeper train was to depart for Florida and spring training, he was besieged by what was then an uncommon sight away from the ballpark -- hordes of fans begging for handshakes and autographs.

Putting down his golf clubs, a happy and somewhat surprised Ruth obliged. The moment marked a turning point in his life. For the rest of his career, especially while in New York, Babe would have to grow used to sharing time in public with his many admirers.

Many ballplayers looked down at the task, thinking it an undesirable chore. Ruth received more requests than anyone, yet few were as generous with their time or as naturally warm toward fans. He seemed to have a constant urge to see others happy, perhaps stemming from his own neglected, unsatisfying upbringing.

As he came to share his smile and good fortune with others, it was children who always received the most attention. No matter how turbulent his own life became, the Babe always found time for kids. This as much as anything else contributed so positively to his growing legend.

Getting to Know the Yankees

Babe's first moments with Yankees teammates marked a sharp contrast to the frustrating experiences he had encountered as a Red Sox rookie six years before. Friendly center fielder Frank "Ping" Bodie introduced him all around, although Ruth already knew most of the players on the team.

Introductions never meant much to the Babe anyway. He had an awful time with names, probably more out of a lack of necessity than conceit or ignorance. He encountered so many people in his varied travels who were simply glad to meet him that he likely found it made more sense not to bother with such formalities. Teammates were no exception.

Many who played with Ruth for several years later claimed without the slightest hint of anger that he never knew their real names, the most famous case of all probably being that of Waite Hoyt. A Hall of Fame pitcher and teammate of Ruth's for 11 years in Boston and New York, Hoyt had just found out he had been traded to the Tigers during the 1930 season when Babe approached him.

Looking at the friend who had won over 160 games in their decade-plus together, Ruth stuck out his hand and said warmly, "Goodbye, Walter." If Hoyt was bothered by the incident, he never let on. Like most comrades of the Babe, he was forever retelling such stories to enraptured audiences for the rest of his life.

Handed his first $5 for expense money as the train headed to Jacksonville, Ruth was quick to urge his new mates to get a card game going. One of his sidelines in Boston had been an interest in a cigar factory that produced the "Babe Ruth Cigar," and he had plenty to hand around on the trip south.

Ruth was up to his old clowning ways when the club arrived in Florida and began practice. This time, he was greeted with a very different response to his antics. In fact, the reaction again showed how far he had come since his first days in Boston.

One day early in camp, Babe was working out at third base, and Bodie cut in front of him for a grounder. Yelling in mock protest, Ruth picked up his 5' 8", 195-pound roommate, turned him upside down, plopped him down on the grass, and sat on him. This time there were no angry words or fisticuffs like Babe's rookie shenanigans toward Joe Wood had brought on. There was only laughter.

In the past a single sportswriter had often dispatched Yankees stories to several New York papers during spring training, but now every paper wanted exclusive stories on the daily doings of the Babe. In fact, 13 reporters wound up in Florida, probably the most to ever cover one team in training camp up until that time. They promptly went to work.

Even before the games started, such legendary scribes as Fred Lieb, Damon Runyon, and Sid Mercer were cranking out copy that appeared under such headlines as "Ruth Complains of Indigestion," "Ruth's Big Bats Arrive in Camp," and "Ruth a Fizzle on Links; Home Run King Smashes Several Clubs." Even a succinct run-down of Ruth's conquests at the dinner table one evening was deemed worthy of a feature story, and the readers ate it up.

The Jacksonville Chamber of Commerce had also geared up for Babe's arrival, publicizing each Yankee exhibition game throughout Florida as a chance for fans to see baseball's greatest new star. The New York team itself was not much of an attraction; the Yankees had never won a pennant, and despite the great players acquired from Red Sox owner Harry Frazee, they were not yet known as the regal and imposing club they would soon become. Ruth was the draw, and the club performed before record crowds throughout the spring.

At first Babe seemed to have trouble living up to the billing. He started slowly in camp, and after striking out several times a game during a series with the Brooklyn Dodgers, he was bothered by spiteful comments and headlines in the newspapers back East.

One day a fan was continuously riding the struggling outfielder from the stands, and Babe eventually snapped. He climbed into the seats in pursuit of the insult artist ("Ruth Turns on Blatant Fan Who Calls Him a 'Piece of Cheese'"), and the man pulled out a knife which Ruth later recalled looked "about a foot long." Someone intervened before either could get hurt. "I believe it was the very next day that I got going," Ruth said in his autobiography. Following a mammoth home run on April 1, 1920, he was indeed among the team's hottest hitters the remainder of camp.

Off the field, Babe seemed intent on doing everything Yankees manager Miller Huggins had warned against during their first meeting. Ruth's reputation for mischief was growing as fast as his popularity, and Bodie grew accustomed to taking both his own suitcase and Babe's to their hotel room each time the Yankees train reached a new town.

Barely waiting until the wheels stopped rolling, Ruth was off in search of whatever the town had to offer, a ritual teammates would grow to view as commonplace the next several seasons. One evening in Miami, Ruth and a group including players, reporters, and even Colonel Huston stayed out all night after a game. Bodie reportedly needed the assistance of three teammates to make it to the train.

Ruth was not much better off. He later admitted that "my reflexes were a bit off that day," and while in pursuit of a fly ball that afternoon ran directly into a palm tree -- knocking himself cold. He was back to his old tricks soon thereafter, and it was around this time that the famous remark that most aptly summed up Ruth's social life began making the rounds.

Later historians would give credit to Bodie or a number of other teammates, but the line could have come from anybody. Asked what it was like to share quarters with the wild young star, Bodie had answered, "I don't room with Ruth. I room with his suitcase."

Bodie wouldn't be rooming with anybody on the club for a while, as he jumped the team in March due to personal problems. Another outfielder, Chick Fewster, was hit in the head by a pitch and after heading north to Baltimore for surgery was all but finished for the season.

But the Babe was just getting started, and of particular interest was his work behind the plate. Continue to the next page to learn more about Babe Ruth at bat.