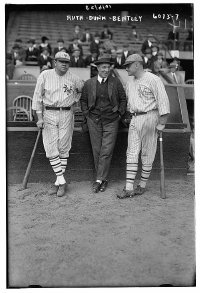 As had now become his regular off-season routine, Babe Ruth put himself under the brutal supervision of Artie McGovern for grueling daily workouts to get himself in shape for the 1928 baseball season. McGovern claimed, "Ruth is physically five to 10 years younger than he was two years ago [when they first began the workouts]."

The Babe still indulged himself, but now in new pastimes like bridge, fox hunting (he could sweat off five pounds in one day on the horses), and the saxophone. It is known that he mastered one song; whether he ever learned a second is unknown. One vice did not go away; he still couldn't keep his heavy foot off the gas pedal. He was arrested for speeding again in May 1928.

With the exception of signing promising young catcher Bill Dickey and obtaining Leo Durocher as a fill-in infielder, the nucleus of the Yanks remained unchanged for the 1928 season. The pitching staff needed some shuffling.

Urban Shocker, the 37-year-old pitcher who had won 18 games for the 1927 squad, found his heart condition to be too debilitating and left the club during spring training. He died that September. Illness also hampered Herb Pennock's effectiveness, so George Pipgras took over, and Waite Hoyt remained consistent.

The Yankees opened the season by trouncing the Philadelphia A's and never looked back. By Independence Day in July, they were 131/2 games in front of Philadelphia. When the first of August rolled around, Ruth had hit 42 homers, putting him 26 games ahead of his 60-homer 1927 pace. (As it would turn out, though, he would hit just a dozen more.)

Then injuries began to pester the Yanks. A shoulder problem forced Tony Lazzeri out of the lineup, making the acquisition of the feisty Durocher (whom Ruth never liked, thinking him a dandy) especially valuable.

The seemingly unstoppable scoring machine was getting stopped more and more frequently. Meanwhile, the Athletics were on their way to becoming one of the great teams of the century. The energetic young A's drove forward while the vaunted Yanks stumbled.

Like its superstar outfielder, however, this Yankees team had a flair for the dramatic. By September 9, in a New York doubleheader between the two teams, the A's had moved into first place by half a game. There were 8,000 standing room only tickets put on sale that day; 25,000 people tried to buy them. Special police units had to be called in to quell the bedlam. Attendance was quoted as 85,265. (Yankee Stadium had been enlarged in the off-season.)

The Yanks swept Philadelphia that day, and after an off-day Ruth untied the next game in the eighth with a two-run homer off supreme hurler Lefty Grove. The New York Times said, "It was the Ruth, the whole Ruth, and nothing but the Ruth at Yankee Stadium yesterday." Even though the race wasn't technically over, the Philadelphia spirit was crushed. The Yanks ended the season 21/2 games in front.

However, once those games were played, Ruth stopped hitting entirely. Historian Lee Allen described the scene perfectly: "A large man in a camel's-hair coat and camel's-hair cap, standing in front of a hotel, his broad nostrils sniffing at the promise of the night."

Manager Miller Huggins considered another severe suspension and fine, but rethought it when he realized he would be laughed at. His team was in first place, after all.

The pennant-clinching celebration in Detroit was riotous. Ruth wanted a piano, but the hotel couldn't find one. So the Babe bought one and had it delivered.

While their spirits were high, physically the Yankees were in sad shape. Mark Koenig, Ruth, Lou Gehrig, Joe Dugan, and Lazzeri were all below par with an assortment of injuries. Pennock didn't pitch after August because of a sore arm. Earle Combs racked up his wrist two days before the end of the season.

With those facts in hand and the memory of the Yankees slump in mind, those who were inclined to predict felt that the Cardinals (now managed by Bill McKechnie) would handle the Yankees easily in the World Series. The oddsmakers put it at 6-5, Cards.

The difference between the 1926 Cardinals and their 1928 counterpart was one of managerial philosophy. While Rogers Hornsby had decided to keep the ball away from Ruth, walking him 11 times, McKechnie favored pitching to the big guy. It was a major tactical mistake.

In the first three games, the Yankees outscored the Cardinals 20-7. Ruth had seven hits and had scored six runs. In the fourth game, the Yanks were down 2-1 when "five o'clock lightning" struck in the seventh inning.

Pitcher Billy Sherdel tried to "quick pitch" Ruth. The move, legal in the National League but not in the American (and vetoed for Series play by Baseball Commissioner Landis), was ruled no pitch. The St. Louis fans and players were outraged.

Several loud debates with the umpires roared around the field. Babe walked around the arguing clusters of men with a broad grin on his face. Once they settled down, he did something he would be given more credit for a few years later. Ruth barked at Sherdel, "Put one right here and I'll knock it out of the park."

Sherdel took the bait. Ruth hit the ball over the rightfield pavilion. Gehrig followed with another homer, and the Yanks put up two more runs before the inning was over. They added another deuce in the eighth off old-timer Pete Alexander, propelled by Ruth's third homer of the game.

The game belonged to the Babe. So he decided to end it with a final Ruthian fillip. The Cards scored once in the last of the ninth and had two men on when Frank Frisch lofted a foul fly down the leftfield line. Ruth charged over and snagged the ball on a dead run before it could fall into the temporary seats. Then he held it proudly aloft for all to see as he hustled into the dugout.

The storytellers claim that the 1927 Series was a Yankee blowout; that is incorrect. The 1928 Series, by contrast, definitely was. The team celebrated in full Yankees style. Ruth kept the train from leaving the station until he was sure there were enough supplies for the party to come en route, including four bushels of spare ribs.

All the way from St. Louis to New York that night, whenever the train passed through a small town, throngs of people gathered and cheered to see the Babe. He made dozens of appearances from the back of the train on the way home, with varying degrees of politeness. The crowds loved it anyway.

Babe Ruth ended 1928 on a high note, but there were changes ahead for 1929. Learn more about Babe's baseball career in the next section.