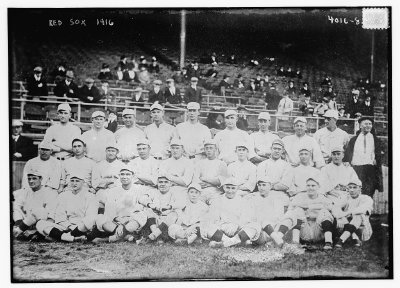 The moving of several Boston Red Sox players to other teams at the end of the 1915 baseball season threatened to spoil the cohesiveness of the club, but winning has a way of solving all problems.

Taking the ball on Opening Day in 1916, Babe Ruth won 2-1 to start the Sox off to a streak of six victories in their first eight games. His second appearance was a match-up with Washington Senators right-hander Walter Johnson, considered by most the best and fastest pitcher in the game. Ruth emerged victorious again in a 5-1 decision.

It was his second triumph over Johnson in as many meetings, and Babe would eventually rack up six consecutive victories against The Big Train (five of the wins would be marked by just a one-run difference) while establishing himself as one of baseball's dominant hurlers.

Ruth won his first four starts to help the Red Sox into first place, but, hurt by the loss of Tris Speaker, the club suddenly dropped into a horrendous batting slump. Even in the dry offensive spell, however, Ruth usually pitched -- and hit -- well enough to win. He out-dueled Johnson again in a 1-0 victory on June 1, then tossed another shutout four days later against Cleveland.

He lost his next start against Detroit but was perfect at the plate and hit his first home run since the previous July. He homered again (a three-run shot) when manager Bill Carrigan called on him to pinch-hit three days later at St. Louis. Pitching the next afternoon's game, the Babe beat the Browns 5-3 while homering for the third time in as many games.

Now that Ruth's average was up over .300, nobody was about to saw his bats in half anymore. There was talk of moving Babe to a position where he could play every day, but Carrigan never really considered it.

As weak as the Red Sox were offensively, the conservative manager felt pitching and defense would still be the keys to the club repeating as champions. Ruth, it appeared, was not only the best pitcher Carrigan now had on his staff but also the finest in the league. Perhaps to drive his point home even more, he kept Babe in the ninth spot in the batting order -- the traditional spot for pitchers in the lineup.

The Red Sox remained in third place entering July but then caught fire. Ruth won four straight in one stretch, including another 1-0 win over Walter Johnson -- this one a 13-inning affair -- and Boston took a 61/2-game lead. Another slump hit, and the Red Stockings had dropped back to third place entering their final western road swing. It was then that the Babe was called upon to save the season.

Facing the second-place White Sox before a crowd of over 40,000 -- at that time the largest to gather in Chicago baseball history -- Babe earned his 20th victory with a 6-2 win to move Boston back into second. (Drawing record-number crowds, by the way, was becoming a regular event for Babe.) An Ernie Shore victory the next day, coupled with a loss by the first-place Tigers, put Boston into the lead, and a three-game sweep of Detroit the following week essentially wrapped up the pennant.

His success against Johnson and in the season's biggest games had earned Ruth status as the ace of Boston's pitching staff. At age 21, he was now arguably the best left-hander in baseball. Compiling a 23-13 record for the season, he ranked third in the American League in wins, innings (3232/3), and strikeouts (170) while setting a league record for left-handers with nine shutouts that still stands.

Only Chicago's Eddie Cicotte bettered Babe's .657 winning percentage, and Ruth's league-best 1.75 ERA has not been topped by a Red Sox pitcher since. He held opponents to a .201 batting average (also the lowest mark in the league) and when at the plate himself batted .272 including 19 pinch-hitting appearances.

Boston faced the Brooklyn Robins in the World Series, and this time Ruth would play a major role. Shore won 6-5 in the opener at Braves Field, and Babe started Game 2 before a delighted crowd of 41,373 and threatening skies. Dark clouds drifted in over the park as the game got underway. Conditions in the park looked ominous for Boston when the third man up for Brooklyn smashed a line drive to center that bounced to the wall for an inside-the-park homer as outfielders Tilly Walker and Harry Hooper stumbled in pursuit.

Trailing 1-0, Ruth escaped further trouble in the third when Robins pitcher Sherry Smith was tagged out trying to stretch a double into a triple. Babe got a reprieve with an RBI ground out later the same inning, and it would remain 1-1 for 11 more frames. Both teams had scoring chances thwarted by base-running blunders.

As the sky grew darker, Ruth seemed to get stronger. After allowing six hits and three walks through seven innings, he had relinquished just one walk and no hits over the next seven. When Boston came to bat in the bottom of the 14th, the umpires declared this would be the last half-inning.

First baseman Dick Hoblitzel led off with a walk (his fourth of the game against Sherry) and was sacrificed to second by Duffy Lewis. Pinch-hitter Del Gainor followed with a line drive over the head of the third baseman (who probably had trouble seeing it in the dark), and the winning run scored in what was then the longest World Series game ever played.

Joe Lannin probably had mixed emotions about the whole thing. Had the game remained tied through 14 innings, the umpires had ruled the contest would have been started from scratch the following day -- a move which would have most likely netted the host Red Sox some $100,000 in additional revenue.

Ruth's excitement over his first Series win was evident as he leaped about the clubhouse. "I told you a year ago I could take care of those National League bums, and you never gave me the chance," he yelled at Carrigan. The manager's warm reply of "Forget about it, Babe," possibly stemmed from the fact that Carrigan knew he would no longer have to put up with Ruth's shenanigans following the season.

The manager had announced his retirement (to be effective at season's end) during September. After the Red Sox dispatched of the Phillies in five games for their second straight world championship, the old catcher waved goodbye to a record 42,620 fans at Braves Field and headed for his home in Maine to stay.

After ending the 1916 season on a high note, Babe and the Red Sox had big changes in their future. Learn more in the next section.