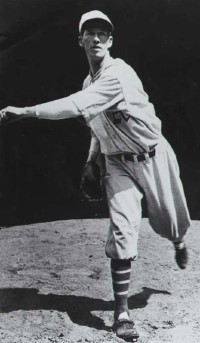 Lefty Grove provided Babe Ruth with the ammunition he needed on the way to a 1927 home run record.

Although Babe Ruth's comeback from illness and injury in 1926 was something to behold, Babe Ruth's 1927 baseball season that followed brought its own phenomenon.

They called it "Five O'Clock Lightning," and for a very good reason. The 1927 Yankees were known to strike hard and with vengeance in the fifth or sixth inning every game. By this point in the game, they had had the opportunity to familiarize themselves with the other team's starting pitcher, and the pitcher began to tire (even just a little).

Unlike baseball today, when the manager will call in a fresh arm as soon as he detects the slightest weakness in his starter, or if he can gain a lefty-righty advantage, pitchers in the 1920s were expected to go the full nine.

The exception to this was if they were getting their brains beat in, at which point the manager took them out just so they'd rest a little longer before their next start. The concept of the relief specialist was still a few years away, but it was hastened into existence by the powerful Yankees.

They were sure to splash their lightning across the sky against any starter who was there too long. Some historians have stated that the development of a solid relief-pitching corps was Babe Ruth's second greatest contribution to baseball strategy.

1927 was a big money year for Ruth. Before the season began, he inked a three-year contract worth $70,000 a year. Ed Barrow, the team's general manager, was being paid $25,000. Manager Mitchell Huggins was earning a little more than half of what Ruth made. No other player earned $20,000. Of course, the baseball salary was only part of Ruth's income.

In February 1927, he acted in a movie called The Babe Comes Home, which contributed to the estimated $250,000 he made in the year before the 1927 season. To help pay for Ruth's salary, the Yankees didn't have days of rest. Exhibition games were scheduled almost every day that there were no league contests, and Ruth played in nearly every one.

The 1927 Yanks ran away with the pennant. The second-place A's had the same record New York had won with in 1926 (91-63). In 1927, though, that was only good enough to finish 19 games back. The Yanks' 110-win total was five more than any AL team had ever achieved. Many today still claim that there has never been a greater team than the 1927 Yankees. It's a case that isn't hard to make.

Of the eight American Leaguers to drive in 100 runs in 1927, four were Yankees. The New Yorkers scored 130 runs more than the next highest-scoring team. One team hit more doubles; no team had more hits, triples, homers, walks, a higher batting average, on-base percentage, or slugging average.

The Yankees struck out 180 times more than any other club, but so what? They hit 102 more home runs than any other team. One out of every four homers hit in the league that year was hit by Babe Ruth or Lou Gehrig.

With no pennant chase to stir fan interest, the real excitement in the American League in 1927 was the Home Run Derby between Ruth and Gehrig, as each mounted assaults on Ruth's record of 59 homers in a single season. Newspapers followed the two closely, reporting on which of the big men had slugged one (or more) out of the park that day.

In July, Ruth smacked a line drive double off Hod Lisenbee of the Senators that nearly crucified the pitcher as he leaped out of the way. Ruthian mythology altered the facts slightly, claiming that the hit went between the pitcher's legs before it rose on a line and left the park.

As of August 10, Gehrig had 38 homers, Ruth 35. Both had an excellent chance to set a new record, but Gehrig cooled off and Ruth caught fire. The first baseman rapped only nine more; the Babe hit 25.

With four games to go, Ruth needed four homers to break his old mark. He hit one off Lefty Grove on September 27 -- a grand slam. The next game he hit two, one a bases-empty shot, the other another grand slam.

In his third at bat that game, he walloped a triple to center that would have been number 60 if he had only hit it to right. His next time up he rapped a long fly to right, and Goose Goslin had to scrunch himself against the wall to reach up and make the homer-saving catch. Ruth had tied his old record with two games to go.

September 30: The score was even at two when Mark Koenig hit a one-out eighth-inning triple. The Senators could have opted to walk Ruth intentionally and hope for a double play. Pitcher Tom Zachary, however, figured he could get Ruth out.

Ruth deposited the third pitch into the rightfield bleachers. Zachary screamed that it was foul; he was overruled. Ruth had broken his own record, and it would stand for 34 years until another New York Yankees rightfielder would almost crack under the strain of trying to top it.

The Yankees' 1927 World Series opponents were the Pittsburgh Pirates, who, unlike the Yanks, had to fight through a tough pennant race, winning by just a game and a half. The Pirates as a team posted a batting average just two points less than New York's (.305 to .307), and they also topped their league in hits and runs scored.

Lacking in their lineup, however, were any big bangers like Ruth, Gehrig, and Tony Lazzeri. But there were three future Hall of Famers in the Bucs' starting lineup: Pie Traynor and the Waner brothers, Paul and Lloyd. Their pitching staff had two starters who wore glasses -- a rarity for the times.

The Ruth myth for that year was invented by one of Ruth financial advisor Christy Walsh's ghostwriters. It said that the Pirates, while watching pre-Series batting practice, were awed by the Yankees size and power and were therefore crushed by the dominating Yanks in four games. The truth, however, is quite different.

The dirt-tough Pirates were not a team that was easily scared, for one. For another, no Pirate that historians have ever interviewed recalls having watched that batting practice. The Yanks won in four games, all right, but the scores were 5-4, 6-2, 8-1 (featuring a one-inning six-run outburst), and 4-3.

After the Series, the barnstorming teams of "The Larrupin' Lous" and "The Bustin' Babes" played 21 games. Ruth had originally planned to give Gehrig a percentage of the gate as his pay but rethought the matter and paid Lou a flat $10,000. It was $3,000 more than Gehrig had earned for the entire regular season. In typical fashion, 13 of the games were never finished because fans poured down out of the stands and took over the field.

Amidst all the barnstorming fun, Babe Ruth and Lou Gehrig were on their way to a new sort of relationship. Learn more about their friendship and professional interactions on the next page.