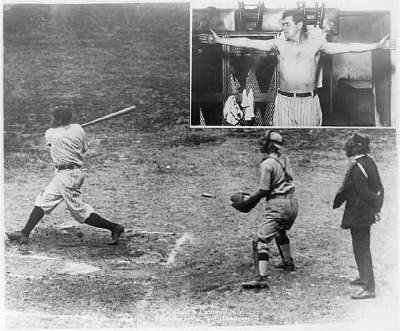 A look at the Babe in his prime

Today, more than 100 years after Babe Ruth's birth and more than 70 years following his final game, his magical appeal is as strong as ever -- even if some of the facts surrounding his career have been skewed.

For many fans under the age of 65, the only image of the Babe is in the movie portrayals by William Bendix (1948) and John Goodman (1993) -- performances that have helped alter history and portrayed the graceful slugger otherwise.

Ruth did not hit three home runs in his last game and then quit on the spot as Hollywood would have us think, nor did he require the aid of pinch-runners to complete his home-run trots. He didn't sport a pot belly until late in his career and began his career not as a slugger, but as a great pitcher.

It may be wrong for folks to believe such things, but tell them the truth and they don't really care. Because it's the Babe, they want to believe it all. The Babe Ruth Museum ran a poll a few years ago in which visitors were asked to vote on whether or not Ruth called his home run off Charlie Root in the 1932 World Series.

Despite equal evidence to support both claims -- and perhaps even a shred more disproving the feat -- a full 97 percent of voters believed the homer had been called.

Even in bad films the point seems clear -- this was a ballplayer and man worshipped like none other. Everywhere he went, people seemed to be smiling. His jovial, moon-shaped face was used to endorse everything from cereal to chewing tobacco to razors to underwear (yes, Babe Ruth's All-American Athletic Underwear), and more than 15 songs were penned in tribute to the Maharajah of Mash -- among them Irving Berlin's "Along Came Ruth" and the forgettable 1948 post-mortem ditty "Safe at Home." The latter reads in part: "He was called out, here below, but he's safe up there I know."

There have been several literary treatments of the story, from the autobiography published just before Babe's death to the host of historical tomes that emerged just as Henry Aaron was approaching and passing his career home run record in 1974.

"What attracted so many people to Ruth?" H.G. Salsinger wrote shortly after Babe's death. "He was rowdy, rough, tough, profane, ribald, swaggering. He had most of the human faults and weaknesses, but he also had most of the human virtues and probably the greatest of them were honesty, complete unselfishness, charity and love for his fellowman. Ruth never pretended to be anything but what he was."

The phenomenon continues today. Named the greatest major league player of all time in 1969 by the Commissioner's Office (the same year his birthplace was saved from the wrecking ball by a group of Baltimore businesspeople), Ruth was one of the first three celebrities -- James Dean and Elvis Presley were the others -- taken on posthumously in 1982 as clients for the Curtis Management licensing firm. Thanks to the Babe's popularity, the company has since added nearly 200 clients ranging from Lou Gehrig to Malcolm X.

It's true; technically he is no longer the home run king. Even the Babe himself said all records are meant to be broken. Everyone agrees, however, that he was truly amazing. Babe Ruth -- a kid at heart with a smile that spread from ear to ear. You can almost see him standing at home plate, grinning and giving a wink right before he sends a shot out of the park.