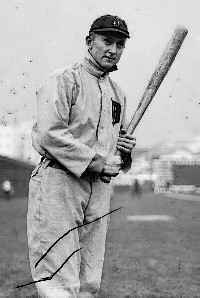 The off-season regimen for Babe Ruth changed following the 1918 campaign with the Boston Red Sox, for there was no longer a father to go home to and help at the bar. A fistfight outside his tavern had left George Ruth Sr. dead. Babe was officially the orphan he had in effect been for years.

He grew restless on the farm with Helen, and his nighttime spending sprees continued. This prompted a plea to team owner Harry Frazee for another raise, from $7,000 to $15,000, a figure exceeded only by the great Ty Cobb. Ruth punctuated his demand with the stipulation that it be a two-year deal.

Frazee said no; between poor war-time attendance and the cost of purchasing star players, Big Harry was in big debt. He proved his point by selling Ernie Shore, Dutch Leonard, and Duffy Lewis to the Yankees, but Babe threatened again to quit baseball. Frazee didn't buy the threat for a moment.

Only when March came and the holdout threatened to affect his spring training gate receipts did Frazee relent. Babe had offered an alternative demand of $10,000 over three years, and it was accepted. Ruth promptly went south, and in Boston's first exhibition game versus the Giants, he hit a home run longer than anyone present could ever remember seeing. Legend has it traveling 600 feet or more, and it was a sign of what was to come.

Babe took Duffy's vacated starting spot in left field and homered in a 10-0 Opening Day trouncing over New York. After several rainouts, the Babe added a double, two triples, and five runs scored in a pair of victories at Washington.

Ruth's nightly escapades reached new heights in the capital city, however, and star or no star the tough-minded team owner Ed Barrow wanted Babe to know who was boss. Eliciting the help of a night porter at the team hotel, Barrow was awakened at 6 a.m. and told that the Babe had just come in. Storming into Ruth's room, he found the slugger in bed with the sheets pulled up -- cigar lit and fully dressed. "You're a fine citizen, Babe," he reportedly shouted. "I must say, you're a fine citizen."

Initially embarrassed, Ruth was fuming when he arrived at the ballpark the next day and challenged the 50-year-old Barrow to a fight. Ed didn't back down. While a sparring match was avoided, Babe wound up on the bench.

Only after an apology and a promise to write Barrow a "Dear Eddie" note each night telling the manager what time he arrived back in was he allowed to play. He recovered from a .180 batting average (with just two home runs) the first month and proceeded to start hitting homers at a steady pace.Despite an earlier promise from Barrow that he would not have to pitch, he did come in from left field to go 5-2 by June 20.

The trio of star Sox players sold to the Yankees were missed, as was pitcher Carl Mays, who was sold for $40,000 following an unexplained midseason walkout. Red Sox fans, no longer having a championship to hope for, increasingly turned their full attention to Ruth. He did not disappoint. Tying his old mark of 11 homers by mid-July, he went on to break Ned Williamson's major-league record of 27 (set in 1884) with a titanic shot over the Polo Grounds roof late in September.

Ruth's home run the last weekend of the season in Washington gave him the unique distinction of being the first player to homer in every city in the league, and his final totals of 29 homers, 114 RBIs, 103 runs, a .657 slugging percentage, and a .456 on-base percentage all led the majors. He also went 9-5 with a 2.97 ERA on the mound, but nobody really cared.

Even though the Red Sox were a sixth-place team, fans took great delight in having the game's greatest slugger to watch every day right in their own back yard.

Nobody could imagine what was coming. Fans would still be able to watch Ruth on a regular basis in 1920, but a change of mailing address would be necessary. Learn more on the next page.