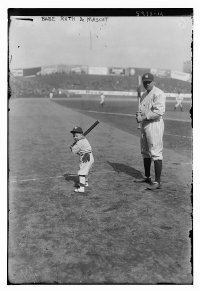 Of all the fans he encountered, Babe Ruth's favorites were the kids. He sometimes spent hours playing baseball with them.

Despite Babe Ruth's continual defeat in his quest for a management position in the majors and his general aging and decline, there were a few good moments in 1934. He achieved one of his pre-stated goals with his 700th home run on July 13.

Fittingly, the 480-foot shot came off Detroit righthander Tommy Bridges in Tiger Stadium -- where under different circumstances, Ruth might have been spending all his home games and calling the shots from the dugout. The clout also offered some perspective on Babe's place in the game; at the time he hit it, Lou Gehrig and Rogers Hornsby were the only two other players in baseball with even 300 home runs.

Talk of Ruth's future came up again. Contending that he would never stay in the game as a pinch hitter (a demeaning suggestion team owner Colonel Jacob Ruppert had come up with early in the summer), Babe said he would only continue playing if he could also manage. This being the case, it was now generally assumed his playing days were at an end. He was met by large crowds his final time around the league, and nowhere was the reception grander than in Boston.

The Babe Returns to Boston

"Fans Storm Fenway Park In Tribute To Babe Ruth," read the front-page headline in the Boston Globe. "Gates Are Closed Early Leaving Fully 15,000 Rooters Milling Outside." The final official count of 46,766 fans for the August 12 game -- including several thousand roped off in the outfield -- was a record for Fenway, and the crammed masses cheered the Babe throughout a Yankee-Red Sox doubleheader.

It was, in fact, the first time Ruth had started both ends of a twinbill all season. Despite his wearing the dreaded New York uniform, the crowd screamed after each of his two hits (including a double) in the opener and booed Sox pitchers when they walked him twice during the afternoon. They looked the other way when he bobbled Billy Werber's liner to bring in Boston's winning run in the first contest, and the official scorer mercifully ruled Werber's hit a triple.

Twenty years to the month after he first stepped off the train and won his American League pitching debut for the Red Sox on the same field, the returning hero tipped his cap and left midway through the second game to a standing ovation. At this time, most Bostonians probably figured they had seen the last of Ruth the player. They were mistaken. Babe sightings would be a regular occurrence in town the following spring, they just would not be happening at Fenway.

The Boston turnout was the final bright spot in a dismal year, and only around 2,000 fans turned out at breezy, overcast Yankee Stadium for the season's final home game on Monday, September 24, 1934. No official word it was Ruth's farewell appearance ever came, and after limping down the line following a walk in the first inning, Babe was removed for a pinch runner. There was only thin applause as he left, quite a contrast from the electric presence in the packed yard when he christened it with a home run over 11 years before.

The last contest of the season came six days later in Washington, and the St. Mary's band -- perhaps paying Ruth back for his fundraising of 1920 -- came down from Baltimore to make things a bit brighter for their most famous alumnus and 15,000 onlookers. Ruth was given a testimonial signed by several thousand fans including President Franklin Roosevelt, and the Babe told the crowd over the public address system that he'd like to stay in baseball, "as long as I can do anybody good." He was hitless in three at bats but did score following a walk. By the eighth inning, Myril Hoag was in right field for the Yankees.

A post-game photo from that day shows a tired, aging Babe smiling wanly and toweling himself off in the clubhouse, but a more telling shot is one of him being quickly whisked through the crowd by policemen as he leaves Griffith Stadium. His hat pulled down nearly over his eyes, looking tired and disillusioned, Ruth appears oblivious to the young kids crowding around him for his autograph. It would seem that the magic was gone.

The discussion of where Babe would be the following season continued. Before departing to "cover" the World Series for the Christy Walsh syndicate, Ruth went to Ruppert's office looking for an answer. Babe asked just one question: "Are you satisfied with McCarthy as your manager?"

Ruppert replied, "Of course I am. Aren't you?"

When Ruth said he actually wasn't and thought he could do a better job himself, there wasn't much more for the two men to discuss. Ruppert said he had no plans to remove McCarthy from his job, and Babe was quickly on his way out the door -- this time for good.

The Cards won the 1934 World Series in seven games, but the biggest story to come out of St. Louis was when Ruth popped off to three New York sportswriters with the official verdict on his future plans. "I'm through with the Yanks. I won't play for them again unless I can manage. But they're sticking with McCarthy, and that lets me out."

If he was finished with the Yankees, where did Ruth end up? Discover details on the next page.