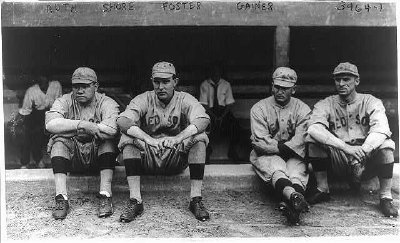 For the 1915 baseball season with the Boston Red Sox, Babe Ruth was a lean, muscular man whose body had been hardened by the tough and disciplined life of St. Mary's. He wasn't fatter than everyone else then (not yet), just bigger.

His facial features were also distinctive. Ruth's face was defined by small, squinting eyes, a broad, flat nose, and large lips. Reporters and fans everywhere were just beginning to discover the universal appeal of this gregarious, funny-looking youngster, and Ruth was basking in the attention.

For now, however, he was but one star on a pennant-winning Boston Red Sox team that had recorded an impressive 101-50 regular season record. Ruth had hit .315, and with 10 doubles and a triple to go with his four homers in just 92 at bats, he had a tidy .576 slugging average. This mark was some .250 above the league average.

The numbers matched nicely alongside his 18-8 record and 2.44 ERA as a pitcher, but despite a handful of pinch-hitting appearances (he went 1 for 10), Babe was still counted on mostly for his hurling.

The hits were a helpful bonus; the Red Sox had only outfielders Tris Speaker (.322) and Duffy Lewis (.291) regularly contributing to a shaky offense, but Ruth, Rube Foster (19-8), Ernie Shore (18-8), Dutch Leonard (15-7), and Joe Wood (15-5) comprised the American League's deepest starting staff. If any of them got in trouble, Carl Mays now waited in the bullpen.

The youngster among this sextet, Ruth pitched nine innings in a meaningless doubleheader at season's end while the others were rested in anticipation of the upcoming World Series against the Philadelphia Phillies. This indicated Babe wouldn't get a Series start, and that was indeed the case.

He did see action as a ­pinch-hitter in the ninth inning of the third game (manager Bill Carrigan now showing considerable confidence in his batting), but he bounced out to first with a man on base in a 2-1 loss. He was frustrated by the experience, but his mood was likely tempered somewhat when the Red Sox went on to win the Series in five games. This feat earned Ruth a $3,780.25 winner's share -- nearly $300 more than his annual salary.

Ruth had joined the Red Sox at a very opportune time financially. The establishment of another major league during 1914 and 1915 -- the Federal League -- had forced American and National League owners to pay higher salaries to keep their players from jumping ship.

The practice held true especially for the bigger stars of the game, but it trickled down through the ranks all the way to rookies. Although several players did make the leap, the ownership strategy eventually did the trick; the Federal League did not survive into the 1916 season, and owners were able to go back to their parsimonious ways.

This inevitably led to salary disputes in 1915 as stars fought to avoid pay cuts. The Red Sox had two of the most celebrated players of the time: Speaker refused to sign through spring training when Sox owner Joseph Lannin announced he was cutting him from $15,000 to $9,000, and the frail-armed Wood failed to report altogether when his salary was slashed even more dramatically.

Boston players continued to remain optimistic that their stars would soon be under wraps; after all, the Red Sox were a championship team. Even when Lannin purchased the outfielder Clarence "Tilly" Walker from Connie Mack's A's,the transaction was looked at as solely an insurance move, what with Duffy Lewis hurting and spring training less than a week away.

A few days later, however, Speaker was sold to the Cleveland Indians for $50,000 and two unknowns (one of whom turned out to be Sad Sam Jones, a fine pitcher). It was the most shocking and disarming news Boston baseball fans had ever heard, not to be surpassed until another outfielder was banished from Boston a few years later -- but that's another story.

Speaker brought in the largest amount ever paid for a player, but no one except Lannin cared about the money when the cost was a .344 lifetime hitter and the leader of the World Series champs. It was also effectively the end of Wood's Boston career; he never did sign with the Red Sox, instead joining his friend and roommate in Cleveland the next spring.

The 1916 baseball season was deemed a success for Babe Ruth. Learn more about his winning ways on the next page.