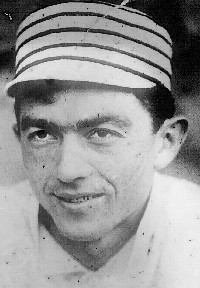 Spring training of the early-20th-century era lacked sophisticated techniques and practice drills. The baseball teams got in shape by playing as many games as possible, and owner Jack Dunn scheduled games for his minor league Orioles against anyone -- from military academies to major-league outfits.

On March 18, 1914, during Babe Ruth's first spring training, the Babe got his chance to pitch to big league hitters. It ­wasn't glorious.

Babe vs. the Phillies

Brought in to face the Philadelphia Phillies in the fourth inning, Ruth immediately allowed singles to both Hans Lobert and Fred Luderus, the former a one-time good hitter now past his prime, the latter just an average player.

Sherry Magee, winner of the National League batting title in 1910, drew a walk. Pitching sensation Babe Ruth had loaded the bases with nobody out in his first try at major-league hurling.

He settled down enough to make the next hitter pop up, and the following batter rapped an apparent double-play grounder to short. When shortstop Claude Derrick bobbled it, though, a run scored. Another single drove in a second run.

However, no Phillie hit safely against Ruth in the next two innings, although the Babe did allow two more free passes. The Orioles came back to win 4-3.

Ruth got another chance the next day. The Phillies had pounded Oriole pitching to take a 6-0 lead, with four runs already across in the sixth inning and only one out when Ruth was called in to douse the fire. He fanned Henry Matteson and George Paskert to close out the inning, then pitched three more innings and allowed no runs, surrendered only two hits, and struck out three. The Orioles roared back and won 7-6.

In his two appearances against big league batters, the 19-year-old Ruth had faced 29 men and allowed just six hits. Dunn moved him into the starting rotation.

Bad weather delayed Babe Ruth's first pitching start for six days, but he took the mound in Wilmington, North Carolina, on March 25, 1914, against Connie Mack's potent Philadelphia Athletics. The A's were probably the best team in baseball, having won the World Series three of the past four years. Their lineup could have been called the Murderer's Row of its time.

The A's had outscored every other team in the American League in 1913 by at least 161 runs. They routinely led the league in batting average, runs, and homers. These were the A's of the fabled "$100,000 Infield," featuring future Hall of Famers Frank "Home Run" Baker and Eddie Collins.

Ruth surrendered 13 hits to the Mackmen but won the game 6-2 with savvy pitching that dodged the bullet with men on base. Home Run Baker found Ruth's pitches to his liking. He slugged four hits and made an out only when his long drive to right was flagged down.

Dunn, eager to drum up business, left for Baltimore to promote another exhibition against the Athletics the following Saturday and promised Ruth would pitch again.

Less than four weeks after George Ruth had quietly left his hometown in search of a dream, he returned to quite a surprise. The papers were now calling him Babe, placing his picture in the sports pages, and encouraging the people of Baltimore to come and see him play. Unfortunately, Ruth pitched poorly on the wet grounds that day and lost 12-5.

However, his opponents were sitting up and taking notice. Phillie coach Pat Moran, who later managed the Phils and Reds to pennants, said, "Ruth is a marvel for a kid just breaking in. I predict that within a few years Ruth will be one of the best southpaws in baseball."

Athletics second baseman Eddie Collins said, "Ruth is a sure comer. He has the speed and a sharp curve, and believe me, he is steady in the pinches," an obvious reference to the 13-hit, two-run performance.

After Ruth topped the Brooklyn Dodgers in another exhibition, Dodger manager Wilbert Robinson predicted, "He will be one of the sensations of the baseball season." In that game, Ruth belted a long fly to right that only a running catch by 23-year-old Casey Stengel kept from being a hit.

Next time Babe came up to bat, Stengel (on his manager's orders) was playing Ruth even deeper, but the Babe, slugging a ball even Stengel couldn't catch, took it for a triple. Stengel's comment on Ruth's pitching: "He had good stuff, a good fastball, a fine curve -- a dipsy-do that made you think a little."

Spring training was winding down, but the Baltimore weather wasn't getting more springlike. Dunn was scheduling games against big league opponents (and having many rained out) for two reasons: One was the bigger payday -- more fans would come to see the major leaguers. The other was an attempt to forestall a more serious threat: the Federal League.

Since the American League Baltimore Orioles had moved to New York 11 years earlier, the fans of Baltimore had been without major league baseball, and they ­didn't like it. This situation set particularly poorly with them since their Orioles of the 1890s had been a legendary bunch of snarling, scrapping winners.

In 1914, however, a new major league, the Federal League, was starting up, and they had a team in ­Baltimore, headed by Ned Hanlon, who had managed the old Orioles. The Terrapins, or "Baltfeds," were garnering all the headlines on the Baltimore sports pages.

Babe vs. the Giants

Dunn scheduled a three-game series against the Giants of John McGraw. McGraw, who had been one of the feistiest of Hanlon's remarkably feisty Orioles, was sure to draw a large crowd. The first day they did. Something very magical happened for the Babe in this outing.

He wasn't in the game until late in the ninth inning. With a 2-1 Baltimore lead, Ruth was sent in as a replacement for the first baseman. The infielder had to be dismissed from his post when he lost a tooth and split a lip after he took a shot in the mouth with a batted ball. The tension had been building in the toughly contested match.

When a ground ball was fielded and thrown to Ruth at first for the final out, the jubilant youngster, thrilled at the victory over the mighty McGraw Giants, gave out a shout of joy, threw the ball into the stands, and ran down the foul line, encouraging the cheers of the fans. The Babe forged a bond with the fans that would stay with him from that point on.

The Giants won the next day, to a much smaller crowd. The third game coincided with the Terrapin's home opener. The Terrapins drew 28,000 fans; the Orioles about a 1,000. Ruth pitched and lost.

But the regular season lay ahead. Find out how the Babe fared in his first baseball season in the next section.