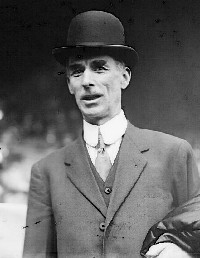 Just as the skies had parted and let go with a mighty snowfall the day George Ruth Jr. -- not yet the Babe -- left Baltimore in 1914 to attend training camp with his minor league Oriole teammates, the miserable weather healed as if by divine intervention on April 22 that same year.

It was that day that Ruth was scheduled to start the second game of the regular baseball season against the Buffalo Bisons. Although the temperature was in the 40s in the morning, by noon it was past 70 degrees. By game time it was a luscious 83.

Ruth's nervousness was evident in the first inning he pitched. Ernest J. Lanigan, one of the era's most famous sportswriters, offered this terse description. "Vaughn was thrown out by Ball; McCarthy walked and took second on a wild pitch; Murray flied to Cree; Ruth and Gleichman got mixed up on Houser's pop fly, the ball dropping safely for a hit and McCarthy taking third; Houser stole second; Jackson was hit by a pitched ball, filling the bases; Roach was thrown out [on a spectacular play] by Ball. No runs, one hit, no errors."

A dreadful debut inning for Ruth, yet miraculously no runs scored. His inaugural bath over, Ruth allowed just five hits the rest of the way, shutting out the Bisons for a 6-0 win. There were, however, only about 200 fans there to see it.

By the end of the first week of May, the Orioles were in second place, but the major league Terrapins were in first -- and hogging all the fans. The local papers didn't even bother to send a writer along with Jack Dunn's team on their first road trip.

That road trip was a new step in Babe Ruth's education. For the first time, he visited large, bustling cities, sampling their wares (and wiles). Buffalo,Toronto, Montreal, Rochester, Boston, and New York City (where the team stayed when they played Newark) opened their arms to the brash young star. He was having fun in a way he could never before have imagined.

By the end of May, Ruth was pitching well, although not consistently so. Fearful that his young prospect would be stolen by the Baltfeds (Terrapins) -- even though Hanlon had sworn he wouldn't raid his old friend's team and never did sign an Oriole player -- Dunn doubled Ruth's salary to $200 a month. This brought him to $1,200 for the year.

Years later Ruth "recalled" that in April of 1914 the Federal League had offered him a $10,000 signing bonus and a $10,000 salary, which he refused because he feared American League president Ban Johnson would prove true to his vow to ban for life anyone who signed with the upstarts.

Ruth's recollection is specious. While the Feds were throwing their money around to sign players, $20,000 for a 19-year-old who had never played a big league game (despite his potential) seems outrageous. By comparison, the Federal League offered Honus Wagner, already an all-time great, just $15,000 to play and manage.

By the end of June, Ruth had put together an 11-7 record in 21 games. Dunn then boosted his salary again, to $1,800 a year. Ruth must have thought himself a millionaire. Truth be told, Dunn's largesse was only in self-defense; he was losing money. Lots of it. When Ruth pitched five innings to beat Toronto 13-8 on June 25, the Terrapins played across the street to a large crowd. Only 20 people paid to see Ruth and the Orioles that day.

By early July, Dunn had met with a group of Richmond businessmen interested in purchasing a share of the Orioles and moving the team to their city. Dunn ­didn't want to leave Baltimore. On July 8, he sold outfielder Birdie Cree to the Yankees for a figure announced as $8,000; the next day Deek Derrick and George Twombly were shipped to Cincinnati for a total of $15,000. Two stories in the Baltimore Sun on consecutive days hinted at what was to come.

The headline on July 9 stated flatly, "All Orioles for Sale." The next day a brief biography of Ruth appeared, titled "The Rise of Babe Ruth: Playing Hookey from School Starts Him on Brilliant Career." In the story, Dunn compared Ruth to Walter Johnson, a bit of braggadocio that sounds a lot like a salesman trying to negotiate a better price for his product.

That same afternoon Dunn announced he had sold Babe Ruth, star pitcher Ernie Shore, and longtime catcher/coach Ben Egan to Boston. The price Red Sox owner Joseph Lannin paid for the three has been variously cited from $8,500 to $25,000.

Dunn had previously offered Ruth to Philadelphia Athletics manager Connie Mack, but Mack was also feeling the Federal League pinch and was just one year away from his first famous "fire sale," at which he sold off nearly an entire team of stars.

Dunn failed to offer Ruth to Giants' manager John McGraw. Not surprisingly, McGraw -- also known as "Little Napoleon" -- was ­infuriated, and his unforgiving rage may have cost him. A decade later, Dunn asked if McGraw wanted Lefty Grove and was snubbed. Dunn sold Grove for the remarkable sum of $100,600 -- to Connie Mack. Grove proceeded to build a career as one of the greatest lefthanded pitchers in history.

The Babe's career, meanwhile, was on track. Just four months and one week after he left Baltimore in a thunderous snowstorm on the first train ride of his life, Ruth was on his way to where he belonged -- the big leagues.

Continue to the next page to learn about Babe Ruth's time with the Boston Red Sox.