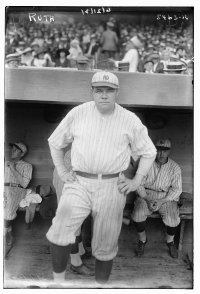 Despite Babe Ruth's record-breaking heroics for the sixth-place Boston Red Sox, the 1919 baseball season was destined to go down as the darkest year in baseball history.

The American League Champion Chicago White Sox were upset by the Cincinnati Reds in a World Series filled with questionable defensive play by the defeated. Whispers soon began circulating of a fix between a gambling syndicate and Chicago players. When there proved to be some validity to the talk and the eight conspiring players were put on trial the following summer, fans grew disillusioned. The very integrity of the game was threatened.

Baseball's first commissioner -- Judge Kenesaw Mountain Landis -- was somewhat helpful in restoring the public trust. In October 1920, he banished the eight accused players from baseball for life. It was through another player's feats, however, that fans were truly able to put aside the ill feelings brought on by the "Black Sox" scandal as it unfolded.

Babe Ruth's 1920 season was so astounding that it defied comparison; his team set attendance records, his name was splashed across the headlines daily, and he quickly became a hero to millions in the cities where he played.

His childish enthusiasm for the game, and indeed for life itself, prompted his ascent to the top of America's popularity charts. Even as the nation entered a decade of unparalleled free-spirited prosperity, Bostonians found themselves in a less than envious position. They could only look on from afar as the most beloved rabble-rouser of them all went about his work.

The Babe, no longer a member of the Red Sox, was now working his magic for the citizens of New York.

The Babe's Journey to New York

The change of scenery for the Babe has an interesting bit of history behind it. The drop to the second division notwithstanding, the 1919 season had been exciting for Boston fans due to one simple reason -- George Herman Ruth Jr. His home runs kept folks cheering long after Boston's stake in the pennant race was decided, and his final total of 29 homers over the course of just 130 games was such an astronomical figure that many people didn't know what to make of it.

American League home run champions over the previous decade (including Ruth the previous season) had averaged just 10 in their title years. Nate Seybold held the former AL record with 16, and Gavvy Cravath's 24 with the Phillies in 1915 had been the previous high by a modern player. Snooping historians had dug up Ned Williamson's 27-homer spree for the Cubs in 1884 -- a fluke effort aided by six-ball walks, underhand pitching, and a 215-foot right field fence in Chicago's home park that season -- but Ruth topped that as well.

It was a crowd-pleasing performance, but not everybody within baseball was impressed. At the time Ruth came along, home runs just weren't a regular occurrence for the game. Some folks, including Ty Cobb, argued that such slugging would make a mockery of the game's strategic makeup were it allowed to continue.

This seems absurd now; scoring as many as four runs with one swing seems like pretty good offensive strategy. One must remember that swinging for the fences was a new style then and contrasted sharply with the base-to-base "inside" baseball Cobb and others thrived on.

Only five major leaguers besides Ruth hit as many as 10 homers in 1919 (none more than Cravath's 12). While Babe's total topped that of 10 big league teams, including both pennant-winners, it was not enough to help Boston to even so much as a .500 record.

"Given the proper equipment, which consists solely in the strength to knock a ball forty feet farther than the average man can do it, anybody can play big league baseball today," a disgusted Cobb noted. "In other words, science is out the window."

Contrary to what Cobb and others thought of homers, Ruth's slugging had certainly not cost Boston the pennant. The Red Sox finished 66-71 because two of the best pitchers from their 1918 world championship club (Dutch Leonard and Carl Mays) had joined former Fenway favorites Duffy Lewis and Ernie Shore on the 1919 Yankees.

Ruth's remaining teammates were a pretty sorry lot that produced a combined three home runs along with an aggregate 3.30 ERA -- a mark exceeded by just two big league teams even when factoring in Babe's 2.97 mark.

The only real bright spot amidst this gloom had been Ruth's longball exploits, and an overflow crowd of 31,000-plus (including 5,000 roped off in the outfield) turned out at Fenway in late September to give him a "day." In an otherwise meaningless doubleheader, he tied Williamson's record and sent the packed house into a frenzy -- nobody caring for the moment that the Sox were headed nowhere.

Team owner Harry Frazee could see the appeal his slugger had on fans, but even with a fine season turnout of 417,291 in attendance, he wasn't making money quick enough. John Lannin still held notes on much of the $675,000 for which he had sold the team to Frazee and two partners in 1916. He was now demanding the remainder be paid.

To make matters worse for Frazee, Ruth now had his buddy, Boston druggist Johnny Igoe, acting as his "agent." Through Igoe, Babe stated that his old contract calling for a $10,000 salary in 1920 was no longer satisfactory.

Ruth now wanted $20,000 a season and was making his familiar threats not to play unless he got it. Once again there was talk of a boxing career, and with a few awful movie serials under his belt, Ruth also pondered aloud the possibility of becoming a full-time actor.

Traveling to Los Angeles to play golf, appear in a few paid exhibition games, and make some more movies (although these were mercifully canceled), he had a grand old time spouting to the press while awaiting a concession by his boss.

It wasn't to come. Frazee's first love remained the theater, and with his debts to Lannin due, he felt there was no way he could pay what Ruth wanted and continue financing his shows -- several of which had recently flopped. Babe's fun-loving disregard for such conventions as curfew and normal eating habits could be ignored, but money was another issue. Frazee needed help quick.

The next item up for sale? The Babe himself. Learn more about Babe Ruth's sale to the New York Yankees in the next section.