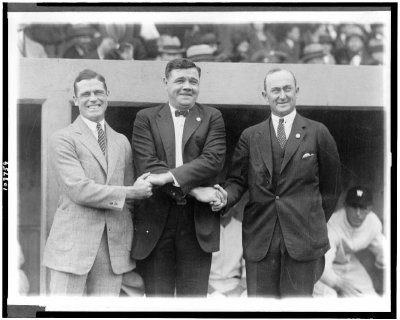 With his amazing baseball stats, Babe Ruth was the toast of the town.

Yankees manager Miller Huggins was simply unable to control his high-living players -- and their ring leader Babe Ruth -- as the 1921 baseball season progressed.

Besides, even though the pitching staff was wearing thin, the team kept winning, so they probably wouldn't have listened anyway. The Yankees clinched the pennant on October 1. Cleveland was second at 41/2 games back.

At the season's end, Ruth's batting numbers were beyond belief. His 59 homers bested his own previous mark by five and added up to 35 more homers than the number two man. Ruth scored 45 more runs than the second-place finisher. With 44 doubles and 16 triples, he totaled 92 more bases than the batter who finished second. He batted in 171 runs, 32 more than the runner-up, and walked 144 times. Only one other player walked more than 100 times in that season.

Babe's batting average was third behind Harry Heilman and Ty Cobb. His on-base percentage was 60 points higher than Cobb's. His slugging average was a stratospheric .846. (The year before it had been .847. Nobody other than Lou Gehrig has ever slugged above .757.)

The 1921 World Series was rightly seen as a clash of baseball styles, with the hit-and-run "little ball" of John McGraw's Giants doing battle with the big belters of Ruth and Bob Meusel (who had hit 24 homers and knocked in 135 runs himself).

In retrospect, we can see it as a clash of baseball eras, between the successful strategies made necessary by the dead ball and the new wave of long-distance slugging encouraged by the livelier and cleaner sphere. At the time, no one could be sure which style would win out. The bookmakers put the Series at even money.

When Ruth's first at bat in Game 1 drove in the first run, McGraw shifted strategy, making certain Ruth wouldn't see many good pitches. The Yanks won Games 1 and 2. Ruth, frustrated after walking for the third time in Game 2, put his feet to work and stole second and third. On his slide into third, he scraped his arm near the elbow. The cut became infected.

In Game 3, he drove in two runs with a single in the Yankees loss, but he was obviously in pain. He had to be removed for a pinch runner in the eighth inning. The abscess that had formed on his arm had to be lanced. A rain out cancelled the next day's game, but Ruth returned to the lineup, injured arm and all, on October 9.

With only one good arm, he hit a home run, which led writer Heywood Hale Broun to coin one of the many great Ruthisms: "The Ruth is mighty and shall prevail." The Yanks, however, lost again.

Babe started Game 5, still in sad shape. A drainage tube led out of his arm and a sore wrist was heavily taped, as were his battered legs. Bloodied but unbowed, he slapped a surprise bunt single in the fourth inning and scored what proved to be the winning run all the way from first on Meusel's two-bagger.

With Ruth still exhausted after his wild dash around the bases on a punch-drunk body, Huggins had to call time until the Babe could catch his breath and take his position in the outfield. When the crowd saw him leave the dugout, they went crazy.

That night the doctors gave him a terrifying report. If he tried to play again, they said, he would certainly require another incision to drain the wound further. The result could be a permanent crippling. He was ordered not to play.

Then, just as there has been throughout time, there was a wise guy. Joe Vila, a prominent (and highly opinionated) sportswriter of the time wrote a blistering column in which he accused Babe of lying. He said Ruth tricked the fans "by going into the game after the report had been spread that he had been forced out of the Series by an operation on his 'infected elbow.'"

When Ruth arrived at the ballpark the next day, someone showed him Vila's column. The enraged Bambino rushed to meet Vila in the press boxes, where he thrust the ugly, bandaged, and draining elbow in Vila's face and shouted, "Why don't you take a picture of this and put it in your paper?" Vila remained coy.

His next day's column said, "Peeved over something that had appeared in print, Ruth tried to pick a fight with a newspaper writer... Ruth, it seems, is no different from other baseball stars who consider praise and flattery belongs to them as a matter of course but are unable to stand criticism without showing their true colors." It may have been true that Ruth was sensitive to criticism, but he was certainly no faker. Baseball was what he did, and he never wanted to do anything more.

The Giants won the next three games (this was the last of the three-year best-of-nine World Series experiment) and won the Series. Ruth could manage only a ground out as a pinch hitter in the eighth game.

A seldom-noticed but unassailable fact is that the bodies of superior athletes repair themselves more quickly than those of the rest of us. It's part of the package. Babe, as one of the most incredible physical specimens of all time, was a rapid healer.

With his arm on the mend, Ruth already had plans to take Bob Meusel and several other Yankees on a post-season barnstorming tour. Learn more in the next section.