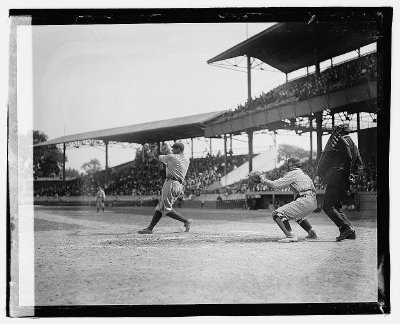 Babe Ruth in action at the plate

Despite the considerable promise he showed as a shirtmaker, it was on the baseball field that young George Ruth Jr. truly excelled. Sports were a vital part of life at St. Mary's Industrial School for Boys, and although there were seven team sports played, baseball was the game of choice.

One of the Xaverian Brothers at St. Mary's was quoted as saying, "Play is the eighth sacrament." Baseball tournaments between different dormitories and trade groups went on as long as the weather would permit.

Large for his age, and with his remarkable athletic gifts, Ruth was playing with the 12-year-olds by the time he was eight or nine, and with the 16-year-olds when he was just 12. He was on the varsity team, playing with men as old as 20, at the tender age of 16.

Ruth learned through long hours of practice. The sessions of fungo catching were usually hosted by the imposing Brother Matthias, who would wear a glove on his left hand, toss the ball out of it, and slug a fly with the bat in his right hand. Some say the huge Matthias had once injured a boy when he swung the bat with both hands. "He was a great hitter," Ruth later remembered.

Matthias also taught Ruth how to run: pigeon-toed. The theory is that running that way makes you faster, because you can push off with all five toes. It seemed to work for the gangly kid. Ruth's famous pigeon-toe trot became part of his legend.

Young George was capable of playing any position on the baseball diamond, even though his lefthandedness meant he had to play with a righthander's glove. His chosen position was catcher, and he demonstrated a great arm in that position.

One fellow student described in later years how Ruth dealt with attempted base stealers from behind the plate: "He would catch the ball in the glove on his left hand, toss the ball straight up, drop the mitt on the ground, catch the ball again in his bare left hand and throw."

In retrospect, it seems unlikely that this kind of performance was standard operating procedure for Ruth, although the teammate's description proved he could have done it when he chose. It's more likely that he did what lefthanders forced to deal with righthanded gloves have done since baseball gloves were invented: he simply wore the mitt designed for the left hand on his right hand. Some photographs taken while he was at St. Mary's indicate that was his style.

Ruth said himself that hitting came naturally to him, but it was the tutelage of Brother Matthias that gave him the discipline to become a good fielder as well. Ruth was the star catcher for the Red Sox, one of St. Mary's intramural teams (all were named after major league nines), when he first became a pitcher.

There are two stories of how George Ruth Jr. took the mound for the first time. In one, the Red Sox hurler, the delightfully named Congo Kirby, lost his baseball privileges for some misdemeanor, and Ruth asked Brother Matthias if he could take over the pitching duties.

In the other, pitcher Kirby was being battered around in one game, and Ruth found it terribly amusing. In the eternal style of parents and teachers throughout the ages, Brother Matthias chided the wisecracking youth with, "If you know so much about pitching, why not do it yourself?" A superstar hurler was born.

Ruth's performances on the diamond quickly began to attract notice. In 1912, the St. Mary's newspaper reported a game in which the 17-year-old batted leadoff and rapped a homer, a triple, and a double. In the same game, he played third base, caught, and even pitched, fanning six batters.

By the summer of the following year, the walls of St. Mary's were too small for Ruth's prodigious talent. As a pitcher that season he was undefeated. When he wasn't pitching, he was the catcher. He batted .537. In one intramural game he struck out 22 batters. Newspaper sources appear to indicate that the 18-year-old Ruth was being allowed to play for semipro teams in the area.

A local article referred to a pitcher for the St. Patrick's Catholic Club named "Roth," bestowing the nickname "the speed boy," for Ruth's fastball was noteworthy. At 6' 2" and 150 pounds, George had the size to deliver the smoke. While newspaper reports from this time are a bit sketchy, Ruth does show up in the boxscore for another semipro team, the Bayonnes, that year.

In a February 1918 interview in Baseball Magazine, the then-24-year-old Ruth reminisced about his ballplaying days at school. "I wasn't a pitcher in those days until I was pretty nearly through my course. My main job was catching... I used to hit .450 and .500. I kept track one season and found that I made over 60 home runs. The last two years I pitched and got along pretty well, but I never lost my taste for hitting and don't expect to."

The Ruth being interviewed had hit just nine major league home runs at the time; he was strictly a pitcher. His comments about loving hitting -- even mentioning the magical 60-homer number, which no one in baseball history had ever hit half of, and which even Ruth wouldn't reach for nearly 10 more years -- seem strangely prophetic.

The Game Against St. Joseph's

The Xaverian Brothers also ran a boys' college, Mount St. Joseph's, not far from St. Mary's. There was good-natured competition between the two schools. The Industrial School boys took the collegians for snobs; the college kids saw their counterparts as ruffians.

Mount St. Joseph's was boasting of their own star pitcher at the time, a young man named Bill Morrisette, who in the 1913 season used his spitball to throw a no-hitter, a one-hitter, a three-hitter, and a five-hitter against competition such as Holy Cross, Georgetown, and Bucknell. (Morrisette would go on to a 13-game major league career.)

As part of the commencement day festivities for Mount St. Joseph's, the Brothers cooked up a plan to have Ruth pitch against Morrisette.

For the first time anyone knows, the man who would be the mighty Babe Ruth was noticeably frightened by the pressure of this upcoming challenge. His fear overtook him, and 10 days before the game, he ran away from St. Mary's, the first time he had left in two years.

The boys at the school were aghast. The gossip spread concerning his disappearance. He was gone for two days before being corralled by the school's probation officer and night watchman, who found him in his old haunts on the piers.

The official word that he had returned voluntarily was treated with scorn by the other boys. Ruth received a severe punishment for his desertion. For five days, he was forbidden to play ball, and instead he had to "stand guard" on the road between the Big Yard and the Little Yard and watch the others. When Ruth's penance had been paid, Brother Matthias reminded him the big game was just two days away and encouraged him to start throwing again immediately.

The precise details of the challenge contest were never recorded. One thing stands out crystal clear, however. Ruth dominated -- striking out at least 14 of the Mount St. Joseph's players and allowing no runs. Morrisette was racked for six runs, maybe more.

By now, not even the professionals could ignore young George's amazing baseball stats. Learn how George Ruth Jr. made his way to the majors on the next page.