Babe Ruth's Escapades off the Field 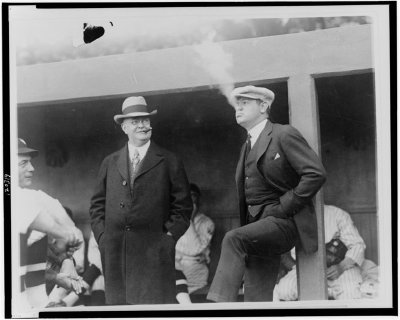 Seen here in street clothes while sitting a game out, Babe Ruth still made for a dashing character.

Babe Ruth's feats at the plate, of course, were only half the story. His escapades off the field were at least as sensational and amazing.

Shortly after his arrival in New York to play for the Yankees in 1920, Babe moved his wife Helen down from Boston, and the couple took up residence in a sumptuous suite within the elegant Astoria Hotel on Broadway. Among the building's residents were famous musicians, writers, and politicians. Ruth, however, was soon claiming bigger headlines than any of his esteemed neighbors with a social life that rivaled that of a movie star.

Ruth met many of the Hollywood gentry, in fact, and here again his difficulty with names made for a great story. Asked by a teammate where he had been one night, Babe spoke of attending "a party with those movie people." Asked which movie people, he replied, "Oh, you know, what the hell are their names?" Apparently Douglas Fairbanks and Mary Pickford -- the reigning stars of the silver screen of their day -- were no more memorable than Waite Hoyt.

Even if he didn't remember them, whoever met Ruth seemed to enjoy the experience. The admirers ranged from everyday people on the street to the bootleggers, politicians, and stars of stage and screen he encountered in the speakeasies of Manhattan. The only one who didn't seem impressed was Helen.

She surely knew of his vicissitudes on the road and never took to the fishbowl life on which Babe thrived. The encounters with reporters and cameramen that accosted the couple each time they left the apartment led to nightmares and bouts of depression. To help escape from the onslaught of press, Helen began spending more and more time by herself back on the Sudbury farm.

Trouble Behind the Wheel

If Ruth was bothered by this, he didn't let it show. His car accident in Boston had apparently had no effect on his thrill for speed, and he continued to purchase customized, powerful automobiles and then promptly wreck them or get caught for speeding. He routinely ignored stoplights and traffic signals on the drive from the Astoria to the Polo Grounds, but police usually let him go with a smile. On July 20, 1920, however, throwing caution to the wind nearly cost him his life.

Taking his newest car on a Yankee road trip to Philadelphia and Washington, Ruth was driving late one night just outside rural Wawa, Pennsylvania, with Helen and three friends from the club. When he sped dangerously around a curve, the auto skidded out of control. As the machine went off the road, Helen and coach Charley O'Leary were thrown clear as it flipped over.

Crawling from the wreck, Ruth found his wife in fine health but O'Leary looking unconscious and dead. "Oh God, bring Charley back. I didn't mean it," Babe cried, and O'Leary did in fact turn out to be OK. The car was another story, and after walking to a nearby farm and spending the night, the group returned to the crash site accompanied by a mechanic. "Sell it," Ruth supposedly said of the wreck. "Take whatever you can get for it. I'm through with it."

Leaving the stunned mechanic and his free parts supply behind, Babe's party proceeded on to Philadelphia. "RUTH REPORTEDLY KILLED IN CAR CRASH" was the headline they found in one local paper, but Babe was supposedly well enough to purchase a new version of the identical car when he returned to New York.

Babe did suffer a banged-up knee in the mishap, one of many injuries that plagued him his first year with the Yankees.

In addition to the pulled muscle in April there was a strained leg in May, a bout of the flu the same month, a jammed wrist suffered while sliding in July, and an infection on Ruth's right forearm in August. The last was initially brought on by an insect sting, which he infected by trying to treat it himself with "instruments" found at home.

Babe missed a total of 12 games for his various ills, but with the way he was living, it was incredible he didn't spend more time sidelined. In addition to his nearly nightly escapades throughout New York, he spent part of August motoring back and forth between the Bronx and Fort Lee, New Jersey, to make a silent film comedy about (imagine this) a young baseball slugger who hits homers and wins the girl.

He missed about a week of batting practice working on Headin' Home and often showed up at the ballpark coated in face makeup. He made $15,000 for the cliché-ridden catastrophe, but $35,000 more was lost in a check that he failed to cash until after the production company had already folded a few months later.

Babe sued another company for $250,000 after they took footage of him batting and turned it into a series of instructional films, but the judge threw the case out, declaring that Ruth was so popular a figure he could be photographed without permission. He had officially become a phenomenon.

Even if he hadn't mastered acting, his services were rapidly being sought for endorsements. One of these came from Republican campaign managers, who -- upon discovering Ty Cobb had voiced support for Democratic presidential candidate James Cox -- wanted Babe to meet their own Warren Harding during his "front-porch" campaign.

Ruth refused initially, but put his affiliations aside upon being informed he'd receive $4,000 for his trouble. The Yankee schedule and other circumstances kept him from ever making it to Ohio, however, and Ruth (who never voted himself until 1944) lost out on the dough.

Star of the Papers

Even the campaign often seemed to take a backseat to Ruth's exploits in the newspapers. In the days before television and radio brought baseball into nearly every home (the first radio broadcast of a game came just that summer), reporters continued to follow his every move with stories and "Babe Ruth Boxes." These tidbits about the Babe even went so far as to document his weight and daily diet.

"Babe Ruth is a bigger show this year than baseball itself," a New York Sun writer surmised. "The infant heads a procession whenever he walks around. They bring their babies to the park and point him out. And the hand that shook the hand of Babe Ruth is looked upon with quite as much awe as the hand that shook the hand of John L. Sullivan (the great bare-handed boxing champ) used to be."

Unlike the trashy tabloid treatment people in the public eye are subjected to today, any negative information about the Babe was often sugar-coated or left out altogether. In an era when reporters and players traveling on the train together formed lifelong friendships, the private lives of athletes were largely kept out of print; the fans seemed content with play-by-play and the lighter side of the game, and nobody drew more fluff in the daily papers than Ruth.

He quickly earned a wealth of nicknames from admiring scribes thankful for colorful copy -- the Sultan of Swat, the Bambino, the Maharajah of Mash -- and throughout morning, evening, and late editions, the praise kept coming.

"He was a special case," remembered Shirley Povich of the Washington Post seven decades later. "Everybody knew what contributions he was making to the game, and what would have been exposed in this later day of baseball writing was simply ignored in those times."

Ruth's power and flamboyant style were impossible to ignore and appealed to postwar Americans earning more money than ever and seeking new ways to spend it. The puritan barriers of the past were being broken down as the nation became increasingly urbanized; women were given the vote in 1920, the radio was slowly replacing the Victrola as the major source of family entertainment, and despite the passage of Prohibition, more and more young people were living fast and drinking hard.

It seemed only appropriate that baseball should undergo its own radical change, and when it did, Ruth was the catalyst. His slugging fit right into this transition, symbolizing the fast-moving dreams of the Jazz Age.

Ultimately, what were the results of Babe's efforts for the Yankees during the 1920 season? See Babe Ruth's baseball stats on the next page.