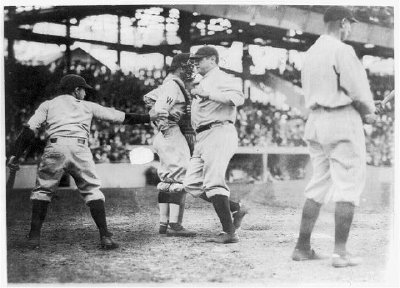 Babe in the midst of a -- potentially controversial -- play at the plate.

Babe Ruth's newfound confidence at the start of the 1917 baseball season with the Red Sox was apparent immediately.

He began arguing vehemently over balls and strikes with veteran umpire Tommy Connolly. At one point, when he was called out on strikes himself in the seventh inning, he turned dramatically and glared at Connolly before retreating to the bench.

It was the type of behavior that has sometimes come back to haunt pitchers, but despite his outbursts, Ruth won his first eight decisions, and the Red Sox moved into first place with a 15-5 start.

Exempted from the draft because of his marital status, Ruth could relax when other major leaguers marched off to register in early June. Still, the pressure to retain his place atop the league's pitching charts seemed to be getting to him. He showed tremendous frustration following a 3-0 loss to Cleveland in which he had the only Red Sox hit and allowed his discouragement to carry over onto the field of play.

On June 23, the Red Sox were facing the Washington Senators. After getting behind in the count to the lead-off man, words were exchanged between Ruth and home plate umpire Clarence "Brick" Owens. The tension between the hurler and the official continued to mount with each pitch. finally, Ruth made a trip to the plate for a little discussion with the ump.

When Owens warned him to go back to the mound or face dismissal, Ruth replied to Owens that he would "bust you one on the nose" if he was run out. Owens proceeded to run him out. Finally, in total frustration, the Babe snapped and charged at the ump, landing a fat punch on his nose. Needless to say, this outburst caused him to be dismissed from the game.

Manager Jack Barry motioned for Ernie Shore to come in and relieve, and after the legal limit of eight warm-up tosses, Eddie delivered his first pitch to the second batter. Just then Morgan broke from first in a surprise steal attempt and was nabbed at second on a throw from Thomas.

Shore proceeded to set down the next 26 batters in order, and since all 27 outs of the contest were retired with him on the mound, he received credit for a perfect game -- just the fourth in major league history -- in Boston's 4-0 win. Of the fisticuffs with the official, Babe would later remark, "It wasn't a love tap. I really socked him -- right in the jaw."

Babe was suspended indefinitely by league president Ban Johnson for the scuffle. It was only after some smooth talking by Sox owner Harry Frazee that he was reinstated after 10 days with only a $100 fine. Whether the incident shook up the club or not, it marked the beginning of a slide for the Red Sox that saw them drop behind surging Chicago in the American League.

The rest of the season saw the Red Sox take first only briefly (in July). Boston eventually finished in second place, nine games back. It would mark the only time in the four years from 1915 through 1918 that they would not be the winners of the World Series.

As for the Babe, he recovered from his slip-up to turn in his second consecutive outstanding season -- and his most durable. Going 24-13 to finish second in the AL in wins, he also placed third in the circuit with 3261/3 innings, finished fifth with 128 strikeouts, and led the majors with an incredible 35 complete games in 38 starts.

He also ranked high with a 2.01 ERA and six shutouts. While Barry seemed even less willing to let him pinch hit than Carrigan, Ruth still batted .325 with two homers. One of these long-distance shots included the first ever struck into the deepest center field bleachers at Fenway.

The lack of a championship was disappointing, but Ruth had settled into a comfortable position in Boston. He and Frazee seemed to get along fine, the slick showman apparently taking to the brash young hurler with his own flair for the dramatic.

When Ruth got into trouble again shortly following the season, the owner let it go without comment. Involved in an automobile accident, the Babe escaped injury, and the unfortunate occurrence didn't garner much bad press. While Frazee probably was not too thrilled, 24-game winners who could hit .325 were hard to come by.

The war caused even more changes in the Red Sox makeup before the start of the 1918 season. Single men who had signed up for the reserves the previous summer were called up for active duty, and this included Duffy Lewis, Shore, and ­player-manager Barry.

Again Frazee was in the market for a manager, and this time he wanted someone willing to help with the day-to-day executive duties of running the ballclub as well. The answer was Ed Barrow, who was in the midst of being forced into resigning from his position as president of the floundering International League.

A tough and confident man, Barrow had managed, promoted, and owned clubs at various professional levels but had less than two years of major league managerial experience. Suddenly both a field and general manager, he would prove quite competent at handling both posts.

Finding ways to replace nearly a dozen players gone or expected to go into the service was Frazee's other main concern. Unlike more conservative owners who chose to wait the war out with whatever talent remained on their rosters, "Big Harry" took out his checkbook and went about improving his club.

Philadelphia Athletics owner Connie Mack was selling off the last of the remaining regulars from his great championship teams of 1910 to 1914. For $60,000 and three second-liners, Frazee was able to pick up pitcher Joe Bush, catcher Wally Schang, and outfielder Amos Strunk. Another deal with Mack a month later -- Frazee gave up Larry Gardner and two lesser players this time -- brought in first baseman Stuffy McInnis.

Ruth wanted in on Frazee's spending spree and asked for a 100 percent raise to $10,000 a year. Frazee balked, joking that "I've never paid an actor that much." Eventually, they agreed to a deal in which Frazee gave Ruth $7,000 for 1918 and promised him $10,000 for the following season were he to turn in a good year.

Just what constituted a good year wasn't exactly known, but Babe intended to leave no doubt he deserved the five figures. Performing well in spring training despite having ballooned in the off-season to over 215 pounds, Ruth played first base in two exhibition games and hit three homers -- including a grand slam. Then it was back to the mound.

But Babe Ruth would soon move into the starting rotation -- as a batter. Learn more on the next page.