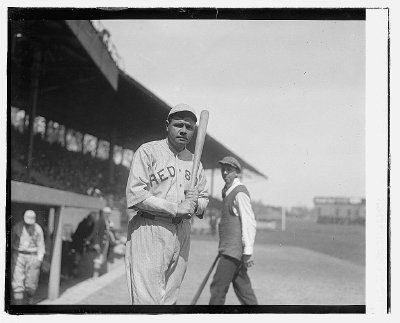 The man who would become The Babe was born February 6, 1895, in Baltimore.

On February 6, 1895, George Ruth Jr. -- who would eventually be known as Babe -- came into this world, the first of eight children born to George Ruth Sr. and Kate Schamberger Ruth.

As an adult, the Babe would have strikingly similar features to his father, George, Sr.: a round face with a wide nose and mouth. Babe's mother was a tiny woman, standing only 4'10". She was just 19 years old when Babe was born and would not live to see 36.

But before her death, Kate would give birth to seven other children: three more boys, including one set of twins, and four girls, also with one set of twins. Even with her short life, she would outlive all of them except Babe and his sister Mary, nicknamed Mamie by her older brother.

The Ruth family had a tough life. George Sr., after trying his hand at several businesses (including his father's somewhat questionable lightning rod operation), was a saloonkeeper. According to Ruth biographer Marshall Smelser, peddling food and drinks was a highly competitive enterprise in Baltimore at that time. Smelser says there were "licensed sellers of legal beverages for each 105 Baltimoreans, the highest known ratio in the country."

In addition, the economic panic of 1893, which shut the doors of more than 500 banks and 15,000 businesses across the nation, had thrown many locals out of work, making it even harder to earn a living owning a saloon.

George and Kate did the only thing they could: work harder. They kept the bar open longer hours so as not to miss any prospective customers. Work weeks that consisted of 100 hours of labor were the rule. Their young son was largely left to fend for himself.

The youngster found his fun in the rough-and-tumble world of the Baltimore harbor, where he was a quick study. He learned the street skills of rowdiness and petty larceny, running and romping with older boys, breaking windows, and engaging in other high-spirited (but largely harmless) hijinks.

It would be hard to claim that Ruth was truly a delinquent. Of course he was full of boyish pranks, and the older boys he hung out with weren't good influences. He had a taste for chewing tobacco by the time he reached seven years old.

George Jr.'s main problem was that he was a boy without a real family to keep him in line and teach him how to behave. One of his favorite tricks was to swipe money from the cash drawer at the family bar and use it to treat the neighborhood kids to ice cream. He grew fast -- in body and in the ways of the world. The one thing he couldn't stomach was school. Truancy was his way of life.

The public schools at the time were awful places to be. They were often overcrowded, dirty, and run by teachers who weren't good enough to find work at the higher-paying private schools. Classrooms were no fun, especially for an energetic young lad like George, with his fondness for street-style rowdy behavior.

His parents, committed by necessity to long work hours and debilitated by his mother's increasingly frail condition, couldn't pull in the reins on this youngster. Ruth didn't seem to understand his family's financial plight or his mother's ill health. Years later he said, "I think my mother hated me."

Unable to control their young son, Mr. and Mrs. Ruth took a drastic step. Find out more on the next page.