Babe Ruth Off the Field 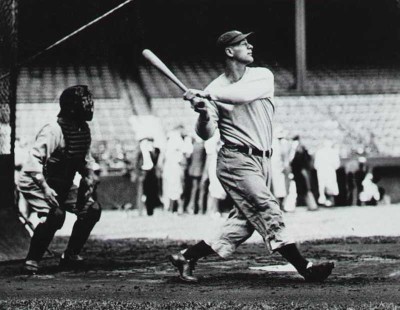 Lou Gehrig aims for the seats.

Despite the suspension that had resulted the previous season, Babe Ruth took off after the 1922 World Series for another barnstorming tour.

Baseball Commissioner Landis, believing he had made his point, saw to it that the owners changed the rule. In retrospect, it's hard to believe that people in Iowa and North Dakota would confuse a fun-loving visit to their town by a bunch of ballplayers with the World Series. Landis's rigorous action against Ruth, however, served to solidify his control of the game.

Ruth returned to New York and Christy Walsh, acting as a good businessman, suggested that Babe make a gesture to let the fans know he was mending his ways. Walsh organized a dinner honoring Ruth at the New York Elks Club. This fete featured a "Back to the Farm" theme (including a papier-mâchè cow) and a freewheeling question-and-answer session with the Babe.

Unfortunately, an up-and-coming politico by the name of Jimmy Walker (soon to be New York's mayor, and no saint himself) took this opportunity to give a passionate speech. It was during this speech that he let Babe have it with both barrels -- for his cavorting, late-night escapades, and huge appetite that kept him constantly out of shape. After scolding Ruth noisily, he played his trump card. He asked Ruth, "Are you going to keep letting down those dirty-faced little kids?"

Ruth was deeply touched. Some claimed he wept. He vowed to go to his Sudbury farm with Helen and Dorothy, work hard, and swear off drink.

He did just that. Ruth, now 27 years old, was able to whip his tired body into first-rate condition. He reported to training camp weighing a healthy 215, far from overweight for his 6' 2" frame. The flu bug that seemed to nab him every spring reappeared, and Babe dropped 13 more pounds before the team headed north, to one of his greatest triumphs -- the opening of Yankee Stadium.

The House that Ruth Built

After the 1920 season, the ownership of the Giants, always fretful about the "other" New York team's success, informed the Yankees that they would no longer be welcome at the Polo Grounds. Yankee management offered to buy a half-interest in the park, raze it, and build an "all-sports pleasure palace" that would seat as many as 100,000 fans. Giants boss Charles Stoneham refused the offer.

The Yankees bought a site across the Harlem River from the Giants' park for $600,000 and began building Yankee Stadium in early 1922. Although the price of $2.5 million was rather steep, Yankee management was proud of their glorious new edifice. It was the first new park to open in the majors in nine years. (There had been 10 between 1909 and 1914, as baseball's popularity boomed and the new technology of structural steel came into the picture.)

Opening Day, April 17, 1923, was a spectacular day for everyone, even if the weather was cloudy and cool. The Yankees beat the hapless Red Sox 4-1. True to his legend, Ruth hit a three-run homer, the first ever in the new park. This prompted Fred Lieb to promptly dub the stadium, "The House that Ruth Built."

Yankee general manager Ed Barrow proudly announced the attendance at a spectacular 74,217. Estimates say 25,000 people were turned away. However, a month later it was discovered that the Stadium seated only 62,000. There had not been 12,000 standing room tickets sold for the opener. The official Yankee response: "It was an estimate."

Two people came into Babe Ruth's life in 1923 who would become major influences on him and his and career. That year the Yankees signed a big strong kid from the campus of Columbia University, Lou Gehrig. Gehrig became the quiet counterpart to Ruthian excess, yet nearly his match as a batter. The duo's batting feats are almost impossible to comprehend. (Gehrig wouldn't join the Yanks full time until 1925.)

The other person was Claire Hodgson. Unlike the nervous, somewhat plain-looking Helen Ruth, Claire was poised, self-confident, and very attractive. She had left a bad marriage in Georgia in 1920, traveled to New York with her daughter, Julia, and started a career. Her elegant good looks soon got her work as a model for well-known illustrators. Her husband died two years later.

She began an acting career, and while working in a play opening in Washington, a friend in the cast asked her to join him to see the Yankees play the Senators. Claire was a baseball fan. She had met Ty Cobb through her connections in modeling and the theater. Her friend also knew Babe Ruth. They met briefly before the game. Although he didn't act it at the time, the Babe was smitten.

He sent an invitation to the theater that night asking her to join him for dinner. Her return note asked if she could bring along a lady friend; Ruth's reputation had preceded him. A phone call ensued in which the Babe agreed to terms but said they'd have to have dinner in his hotel suite, because if he went to a restaurant, they'd be mobbed. He always was. "Don't worry, though," he added. "The place will be full of people. It always is."

By the time the show opened in New York, Claire had been joined by her mother and two brothers (their father had died earlier that year). Ruth began to spend much of his free time in their company, entertaining her mom and charming Claire.

Babe and Helen lived quite separate lives now. Helen and Dorothy stayed on the Sudbury farm throughout 1923, except for their spring training trip and one visit by Helen to the city. It seemed best for the child to be away from the raucous circus atmosphere that surrounded her adoptive father.

Living in the city, Babe found himself wrapped up in the courting of this new woman in his life. Claire was different than Helen. She was someone who could live in the bright lights when necessary and help rein him in when required. Divorce from Helen was out of the question; Ruth had been raised a Catholic.

On the field the Yankees were dominating. With the preseason arrival of pitchers Herb Pennock and George Pipgras from the Red Sox, the Yankee starting eight featured four former Boston players, and six of their eight pitchers were originally Boston property as well. Harry Frazee, having completed the devastation, sold the Red Sox that August.

With so many developments in his life outside baseball, how did Babe Ruth fare on the field? Find out about the 1923 and 1924 seasons on the next page.