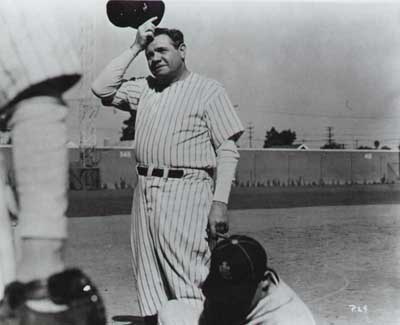 In 1920, Babe Ruth played his first season as a New York Yankee. Showing the way for a new generation of upper-cutting power hitters, the Bambino posted slugging numbers the game had never seen.

Besides hitting a Cobbian .376, Ruth swatted 54 home runs, which not only surpassed his own record of 29 but also each of the other seven American League teams. The nearest individual hitter, St. Louis' George Sisler, hit 19. Ruth led the league in slugging at .847, the highest mark recorded in either league until 2001. American League pitchers were no fools -- they walked Ruth 148 times -- but he still led the league in RBI with 137 and runs scored with 158.

Where Ruth led, others soon followed, as offense in almost every category rose steadily throughout the 1920s. Runs in the American League increased by about 1,000 in 1921. The National League followed the same pattern, although at a slower pace.

Sisler, who in 1920 actually collected 11 more total bases than Ruth at 399, batted .407, the seventh-best average of all time. Sisler also banged out 257 hits -- still a record. In the National League, Cardinals second baseman Rogers Hornsby batted a league-leading .370 and led in doubles with 44, total bases with 329, and RBI with 94.

The baseball rule-makers assisted the new home run style of baseball by changing two rules. The first was the outlawing of trick pitches such as the shine ball, the emery ball, and especially the spitball. That this had an enormous (and underrated) effect on major league pitching can be seen from the subsequent careers of 17 spitball pitchers, who were allowed, under a "grandfather clause," to continue to throw the pitch legally. While ERAs in both leagues shot up in 1920, the composite ERA of the 17 spitballers remained virtually unchanged.

The second change was the new practice of keeping clean baseballs in play throughout the game. This made for a more lively ball that traveled much farther in the air; thus, more home runs. Baseball's justification for the change was the fatal beaning of Cleveland shortstop Ray Chapman by Yankee pitcher Carl Mays, which many blamed on Chapman's inability to see a worn, discolored ball as it sped toward his skull.

Chapman's death greatly affected the American League pennant race, as New York faded to third, one game behind second-place Chicago. Cleveland won the flag thanks to Jim Bagby (31 wins) and rookie shortstop Joe Sewell, who sparked the Indians with a .329 batting average in August and September. The White Sox' chances were ruined when, after months of rumor, the team suspended the eight players suspected of throwing the 1919 World Series in the critical, final days of the season.

In the 1920 World Series, the Indians met National League champion Brooklyn, which was led by spitballer Burleigh Grimes's 23 wins and 2.22 ERA. Cleveland won the 1919 World Series five games to two. On the Indians' side, the games were marked by several World Series firsts, including Elmer Smith's grandslam, pitcher Bagby's homer, and Bill Wambsganss's unassisted triple play.

Besides the passing of the dead-ball era, 1920 also saw the establishment of the sole baseball commissionership under Judge Kenesaw Mountain Landis. This replaced the old three-man commission, which had been dominated by American League president Ban Johnson since its inception in 1903. One of Landis's first official acts was to ban for life the eight members of the "Black Sox," whose trial for fraud had resulted in a fishy acquittal that was rumored to have been engineered by powerful White Sox owner Charles Comiskey.

Check out the next section for some of the major headlines from the 1920 baseball season.

A variety of new rules were established for the 1920 baseball season that had a major impact on the game. Read about some of the headlines of the season below.

Ray Chapman hugged the plate so closely when he batted that his head was usually in the strike zone. Carl Mays, to his dying day, insisted that the pitch that killed Chapman would have been called a strike had he managed to duck out of the way. Chapman had a .303 average in 1920, with 27 doubles and 49 RBI.

Eddie Cicotte was one of the four 20-game winners on the 1920 White Sox. The quartet had a composite 87-46 record, while the rest of the Sox staff was 9-12. Manager Kid Gleason went with just six pitchers for most of the year, using Roy Wilkinson and George Payne primarily in relief. Late in the season, Cicotte was banned for his part in the Black Sox scandal. Eddie was truly sorry for dumping the 1919 World Series. His words dripped with irony when he said, "I'd give a million dollars to undo what I've done."

In his early years as commissioner, Judge Kenesaw Mountain Landis was like a kid at his first carnival, immediately trying all the wild rides. Landis was both feared and loathed by players, several of whom he banished for infractions that in retrospect seem ridiculously trivial. Landis later became known as a player's commissioner who was feared and loathed by many owners.

The "Father of Black Baseball," Rube Foster created the Negro National League, the first organized black major league, in 1920. Although Foster was a pitcher in the early part of the century, by 1920 he functioned mainly as league administrator and manager of the Chicago American Giants, victors of the first three NNL pennants.

After netting an American League-high 31 victories in 1920, Jim Bagby was good for only 21 more wins in his career. Ray Caldwell, a 20-game winner that year, collected just six more victories. And Duster Mails, a late-season sensation, was back in the minors two years later.

George Sisler was one of the greatest hitters in the game, though he seldom walked. He drew just 46 free passes as opposed to 257 hits in 1920. Strong in all other respects, Sisler also came close that year to becoming the first player to total 20 or more doubles, triples, and home runs in the same season.

Find highlights from the 1920 baseball season on the next page. 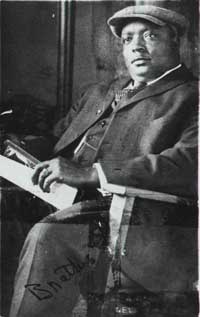 Following are more highlights from the 1920 baseball season, including the lifetime ban of eight White Sox players for throwing the 1919 World Series.