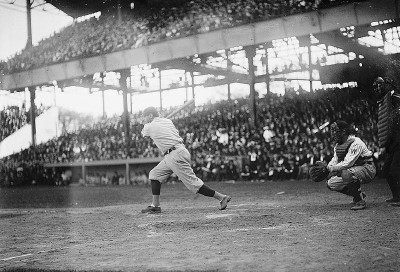 Babe Ruth prepares to run the bases after hitting the ball.

As George Herman Ruth Jr. spent a last weekend with his father and prepared to join his new Oriole teammates in North Carolina, Baltimore gave the Babe a noisy send-off.

Between Sunday and Monday, a foot of snow fell. Gale-force winds blew the roofs off houses and toppled a church steeple. But not even the worst winter storm in 25 years could keep the youngster from making his way to the Keenan Hotel on Monday.

The train, remarkably, left for Fayetteville on time that evening, with Ruth and about a dozen others aboard. Among those who were travelling were Bill Morrisette (who had been the losing pitcher in the St. Mary's vs. St. Joseph's baseball game), another young Baltimore player by the name of Allen Russell, and a lefthanded pitcher named Klingelhoefer, who had been anointed with the baseball-perfect nickname of "Smoke."

George Ruth Jr. had never been on a train before. He asked about the purpose of the unusual hammock-like device that hung from the ceiling of his berth. While well-traveled people would know it was to store clothes, the Babe had no clue. One of the old-timers told him it was there as a special rest for pitchers' arms. Ruth tried to sleep with his left arm hanging in the thing and wound up with a stiff shoulder for several days.

Ultimately, it didn't matter. While the weather in Fayetteville wasn't blizzard-like, it still wasn't right for playing baseball. Cold, rainy, and windy, it would be a week before the team could practice on the field. In the meantime, they spent a few hours in the local armory, tossing balls around and playing handball.

The young Ruth was itching to play, but he certainly wasn't bored. Suddenly freed from the protective eyes of the Brothers, he took boyish delight in his exciting new life. He especially loved the elevator, begging the operator to teach him to run it, and riding up and down for hours at a time.

On one occasion, he had his head stuck out of the doors when he accidentally engaged the motor, and the elevator began to rise. Only the frightened shouts of nearby teammates saved him from possible decapitation.

Ruth arose early every morning to go down to the train yards and watch the five o'clock steam engine roll through. After his sojourn to the railyards, he was first in line when the hotel kitchen opened for breakfast. Wide-eyed Ruth was amazed and delighted that he could simply sign for the meals and the ball club would pick up the tab. So great was his appetite that it soon became a long-running joke among his mates on the team.

A Nickname is Born

Rookies of the time, particularly those as green as Ruth, were viciously hazed by the team's veterans for any behavior that seemed even somewhat inappropriate (or for no reason at all). So the kid's huge tastes kept the older pros in stitches and earned him many smart comments. The Orioles, incidently, were not a young team; and six men on their roster had played in the majors. Five others in this group were more than 30 years old.

The razzing was merciless, until, the story goes, one of the team's coaches admonished the veterans to let up on hassling Ruth, because "he's one of Jack Dunn's babes." In other words, the boss thinks he's something special. The veterans picked up on the term, and a legendary nickname was born; the young Mr. Ruth would never be George again.

The moniker wasn't original at all, of course. At that time, William "Babe" Borton was a major league first baseman, and Charles "Babe" Adams was one of the best pitchers in the National League. Two other "Babes," Danzig and Towne, had previously appeared in the majors.

Somehow, though, this nickname fit Ruth better than anyone could have imagined. The big kid, with his childlike wonder at a world so new to him, his thunderous adolescent appetites for food and baseball, and his fresh-faced, innocent love of life, became "the Babe" as no other ever would or could.

Soon the weather improved enough for the Orioles to move their workouts outside, but many of Dunn's players were stuck up north by the awful weather and couldn't get to Fayetteville. By March 7, they had 17 men in camp, so they recruited a sportswriter, Roger Pippen (who had been assigned as a protective measure to be Ruth's roommate), to play center field. They finally had a game.

It was in that game that the newly christened Babe Ruth did what he would do over a thousand times more in big league parks, on ballfields, and on sandlots all around the world: He belted a monumental home run.

Ruth, playing for the Buzzards against the Sparrows, went two-for-three as the shortstop and pitcher. The home run he unloaded was called "the longest hit ever seen by Fayetteville fans." (The previous longest hit was by Jim Thorpe.)

The ball was hit so far into the right-center alley in the Cape Fear Fairgrounds that Bill Morrisette (stationed in right) hadn't even picked up the ball by the time Ruth reached home. Sportswriter Pippen measured the distance: 350 feet.

After one week of professional baseball, players were comparing Ruth's swing to that of slugger Joe Jackson, even though Ruth had never seen "Shoeless Joe" play. The next day the Baltimore Sun ran a ­two-column headline: "Homer by Ruth Feature of Game."

Some 38 years later, a man who had been batboy for the game persuaded the government of Fayetteville to erect a marker at the spot honoring Babe Ruth's first home run in professional baseball, even though the Fairgrounds themselves were long gone.

In intrasquad games involving the entire roster over the next week, Ruth made headlines one way or another nearly every day: impressive strikeouts when he pitched, excellent fielding when he played short, even a surprising drag bunt for a hit. In a March 14 article discussing the Oriole pitchers, the Sun said this:

"Ruth Impresses Dunn. George Ruth has impressed Dunn most, and before he was at training camp a week he decided that he will be a regular whether or not he strikes his stride. The Oriole magnate predicts that Ruth will develop into a Rube Waddell, for he possesses every mark of a successful pitcher."

The Waddell comparison is especially intriguing, because that astonishing pitcher's career was drastically shortened by his inability to control his moods and appetites. Babe, of course, would face many of the same difficulties, but with dramatically different results.

Two days later a Sun headline read: "Dunn Praises Ruth: Jack Declares He Is the Most Promising Youngster He Ever Had." Dunn was quoted in the article as calling Babe, "a whale with the willow...some of the drives he is making in practice would clear the right field fence at Oriole Park." To his friend Brother Gilbert, Dunn wrote, "Brother, this fellow Ruth is the greatest young ball player who ever reported to a training camp."

It had been only 14 days since Ruth boarded his first train to become a professional baseball player.

After a bout of nasty weather, spring training began in earnest. Find out how much the Babe had to learn on the next page.