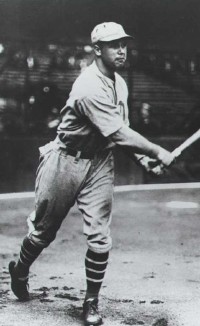 She had been living for several years with a Watertown, Massachusetts, dentist, and most people thought they were husband and wife. In January 1929, fire ravaged the house where she lived. Unable to escape, she perished in the blaze. When her true identity was discovered, it was a national sensation. The Babe wept openly at her funeral service.

At one point during 1929 spring training, New York Yankees manager Miller Huggins was arrested in Daytona, Florida, suspected of being a hotel burglar. The tightly wrapped Huggins had difficulty persuading the local constabulary of his innocence, not to mention his true identity. Babe and the rest of the ball club thought it a hoot.

On the field, the potent Yanks kept strutting their stuff. They won 16 of their 24 games and scored 201 runs. But Huggins wasn't satisfied; he noticed a new smugness among his team. His charges weren't playing with the necessary intensity; they were basking in their success. "They turn to the financial pages first and the sports pages later," he explained.

The Babe and Claire

April 17, 1929, was the scheduled Opening Day. That morning Babe Ruth and Claire Hodgson were married. The game was rained out, so the Ruths had a day of honeymoon before the season got underway.

In the rescheduled opener, the Yankees were attired in their new uniforms: pinstriped, because natty dresser Colonel Ruppert felt the stripes would make Babe's large middle less obvious, and with their numbers on the back, the first team ever to do so. Wearing number 3 (according to his spot in the batting order), Babe swatted a homer that nearly landed in Claire's lap in the leftfield stands.

Claire was the third person to make a positive difference in Babe Ruth's life, after the paternal Brother Matthias and the dollar-wise Christy Walsh. Ruth settled down with the beautiful, no-nonsense Claire and became a devoted husband and father. He and Claire adopted Dorothy, and Claire watched over the Babe with keen, attentive eyes.

She made him dress better (or at least less garishly). She traveled with the team, even though the Ruths had to pay for it out of their own pocket. On the road she saw that Babe ate dinners with her in their hotel suites; at home she watched his diet. She kept him on a schedule so he was certain to get enough sleep.

Claire was very protective of her Babe, forbidding him to lift any heavy objects, even his suitcase. He was not allowed to touch can openers and razor blades. Instead, he went to the barber for his daily shave.

She set a routine. Every year she threw a huge New Year's Eve Party, and the next day Ruth gave up hard liquor and headed for Artie McGovern's gym. Only beer was allowed in their home from January 1 through the end of the World Series. She also acted as Babe's personal secretary. It is said she was highly amused by the many phone calls to Babe from aggressively adoring young ladies.

Best of all, Claire helped cool Ruth's extravagant spending. If he needed money, he had to ask Claire for a $50 check. Gone were the days of hundred dollar tips and diamond gifts to casual acquaintances. Of course, sometimes she had to write a fistful of $50 checks on a single day, but that was much better than Ruth's previous habit of carrying around thousands of dollars, yet always being broke.

With Claire's tight rein on the purse strings and Walsh's investments, it didn't take long for the Babe to become financially set for life.

On the field, though, his team was slipping. Historically it's almost a baseball axiom that a team that is traditionally strong in one area (offense, defense, or pitching) will overrate the importance of that area and underrate the rest. The Yankees had some excellent pitchers during the Ruth glory years, but Yankees scoring explosions could make any pitcher look better than he was.

By 1929, their five top pitchers were all close to 30 years old. Since the Red Sox well had dried up, the Yankees pitching staff hadn't been buoyed by young new talent. In 1929, the Yankees scored 899 runs. Only three times in the previous 30 years had a team in either league reached that level of offensive potency. Twice it had been Ruth's team.

Ruth belted 46 homers to lead the league; Lou Gehrig swatted 35. Ruth drove in 154 runs, Gehrig 126, and Tony Lazzeri 106. Lazzeri hit .354; the Babe .345. But pitching was the Yankee Achilles' heel. The staff allowed almost three-quarters a run per game more than the top pitching team in the league -- the Philadelphia Athletics.

Connie Mack's club was one of the truly greatest teams of all time. They had powerful hitters: Jimmie Foxx at first, Mickey Cochrane at catcher, and an outfield that consisted of Bing Miller, Mule Haas, and Al Simmons, who batted .335, .313, and .365, respectively. Combined they added 58 homers and 332 RBIs.

In addition, they had what the Yankees did not -- superb pitching. Their staff was led by Lefty Grove, George Earnshaw, Rube Walberg, and Eddie Rommel.

The A's made the pennant race a runaway. The Yanks finished second, but they were 18 games back. The only real excitement for Yankees fans took place in Cleveland on August 11, when Babe belted his 500th career homer.

The End of an Era

The simple fact was that at age 34, Babe Ruth's remarkable physical skills were waning. All the sweat in McGovern's gym couldn't prevent the inevitable. In 1929, Ruth appeared in just 135 games, the fewest since he had become a Yankee, with the exception of the suspension year and the bellyache season.

The crumbling Yankees fortunes were taking their toll on Manager Huggins. The slight skipper, who suffered from a variety of painful ailments his entire life, came down with erysipelas, a disease that affects the entire body but is notably marked by severe inflammation of the tissue under the skin.

Early in September, the manager tried an old-fashioned clubhouse pep talk to spark his team. They were blasè. By September 22, his condition had worsened so much that he checked into the hospital. He died three days later. When the New York clubhouse heard the announcement of their manager's death, the ever-emotional Ruth wept.

Perhaps it was the loss of manager Miller Huggins that first turned Babe Ruth's thoughts to managing. Learn more on the next page.