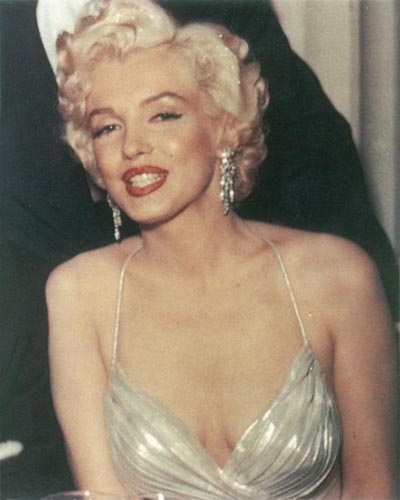 "... everybody is always tugging at you. They'd all like sort of a chunk of you. They kind of ... take pieces out of you. I don't think they realize it, but it's like 'rrrr do this, rrrr do that ... ' but you do want to stay intact -- intact and on two feet." -- MARILYN MONROE

For all her celebrity and fame, Marilyn Monroe remains a mystery. Despite her apparently unending role as America's premier sex symbol, a closer look at her image reveals a mass of contradictions.

Often cast as the dumb blonde in her movies, Marilyn astounded the press with her clever witticisms and cool one-liners; her success as one of Hollywood's most glamorous and beautiful stars almost belies her childhood of poverty, neglect, and loneliness.

The innocence and honesty behind her sexy image contradicted that image's more carnal connotations. Hollywood scoffed at her efforts to be a dramatic actress, yet leading intellectuals championed her cause and praised her talents.

In an industry that thrives on clear-cut, mass-produced images, Marilyn Monroe still surprises us with her originality and her complexity.

Our continued fascination with Marilyn derives in part from the untimeliness of her death. We regret her missed opportunities, her lost potential. We fantasize that perhaps we could have helped her if only given the chance.

Her apparent suicide casts a retrospective shadow over her career, giving it a structure and a clarity it lacked in Marilyn's lifetime. Hindsight allows us to see some of her inexplicable actions and temperamental behavior as indicative of her personal and professional struggles.

We understand her habitual tardiness as a symptom of her insecurities, rather than as an indication of unprofessional behavior; we realize her problems with her studio stemmed from its efforts to misuse and belittle her, not from any outrageous demands on her part.

Nowhere is this change in perception more evident than in coverage by the press. Early on, Marilyn had courted the press, realizing that publicity could promote her career in a way her films could not.

Quickly, however, the media became an uncontrollable force -- always at her doorstep to record the latest development in her personal life or the latest tragedy. In Marilyn's lifetime, they hounded her, criticized her dealings with her studio, ridiculed her aspirations, and misinterpreted her achievements.

In the years since her death, the members of the press have become dutifully reverential, honoring Marilyn as a unique talent whose gifts will never be duplicated -- something her fans have never doubted.

Published accounts of Marilyn Monroe's life and career vary wildly in quality, truthfulness, and intent. Much of what has been published revolves around outrageous speculation about her personal life, in a vain attempt to explain her mystery or for simple aggrandizement of the author.

That brand of sensationalism -- substituting innuendo for fact and titillation for insight -- remains woefully inadequate.

Instead, this article will look honestly at Marilyn's personal life. By detailing her film roles and Hollywood experiences, we can understand how her screen image evolved and how it tapped into the consciousness of an era.

By examining the effect of her image on her life and career, we can sympathize with her struggle to establish and maintain an identity beyond that of the sexy blonde.

In the end, she succeeded; it is because Marilyn inspires our sympathy, concern, and fascination that she is elevated beyond the level of sex symbol. Beauty, desire, triumph, tragedy -- Marilyn symbolizes each of these and more.

Her life, even in childhood, was marred by incomplete relationships and unfulfilled promises -- a mother she never knew, foster parents who made her feel alone and unwanted, husbands who could not understand her, lovers who deserted her.

Her only lasting relationship was with the public, and her most meaningful affair was with the camera. The camera revealed her unique beauty and vibrant personality.

Marilyn made her mark with the camera, and as time slips away and eyewitness memories fade, these photographic and filmic images will be all that remain of her. Through these images, the public continues its relationship with Marilyn Monroe with a passion and loyalty few stars will ever experience.

Explore Marilyn's life and times with the articles in this series:

Marilyn Monroe's Early Life - To get a complete look of Marilyn's life, it's important to start with her humble beginnings. Learn about them in this article.

Marilyn Monroe's Early Career - From bit parts to her own star on Hollywood Boulevard, this article chronicles Marilyn's rise to stardom.

Marilyn Monroe's Later Career - Although her personal life was tumultuous, Marilyn did some of her best film work during her later career, including her famous role in "The Seven-Year Itch."

Marilyn Monroe's Final Years - Marilyn's very public life ended in tragedy. Read about the disappointments and intrigues that led to her untimely death.

Marilyn Monroe as Icon - She's had many biographies written about her, and her famous image graces countless pieces of memorabilia. Learn about the legacy Marilyn left on Hollywood and popular culture.

For more information on the films of Marilyn Monroe, check out the links on the next page. 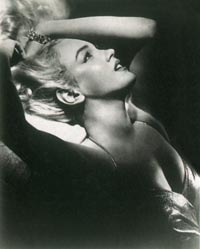 This glamorous actress certainly had a remarkable career.

The following is a list of Marilyn Monroe films. Note: Dates given are years of release.

LADIES OF THE CHORUS

A TICKET TO TOMAHAWK

AS YOUNG AS YOU FEEL

HOW TO MARRY A MILLIONAIRE

RIVER OF NO RETURN

THE PRINCE AND THE SHOWGIRL

SOMETHING'S GOT TO GIVE

Marilyn may have appeared as an extra in The Shocking Miss Pilgrim (1947), You Were Meant for Me (1948), and Green Grass of Wyoming (1948). Also, her photograph is seen in Riders of the Whistling Pines (1949), and her "Every Baby Needs a Da-Da-Daddy" number from Ladies of the Chorus appears in Okinawa (1952).