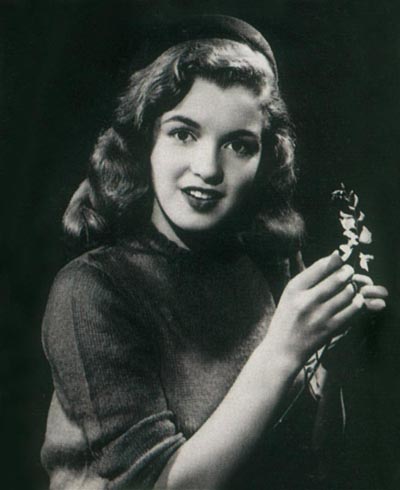 Marilyn's 1946 contract with Twentieth Century-Fox brought her a modest salary of $75 a week -- typical for young unknowns at the time. See more pictures of Marilyn Monroe.

For her first few months on the Twentieth Century-Fox lot, Marilyn Monroe landed no speaking roles in any films. Instead, she was placed in dancing, singing, and pantomime classes alongside other new contract players.

She also posed for an endless series of publicity shots. With her talent for posing in front of the still camera, Marilyn brought an excitement and sparkle to her photos simply not found in the publicity shots of most other starlets.

The Fox publicity department also manufactured a studio biography for their latest contract player, one that insisted that Marilyn had been discovered when she turned up as a babysitter for a Fox talent scout.

Marilyn also made a point of getting to know on a first-name basis some of the reporters permanently based at the studio. Courting the press was a tactic she would use for most of her career, but in the early years she went out of her way to do them favors.

She went so far as to pose at the beach one chilly November in a skimpy bathing suit. Reporters considered her a good sport and a good story, and in 1948 she was awarded the title "Miss Press Club."

One of the reporters who would remain a close friend until her death was New York Post writer Sidney Skolsky. He wrote an entertainment column that could literally make or break a performer's career.

The powerful columnist was more impressed by Marilyn's ambition than by her lack of experience: "It was clear that Marilyn was prepared to work hard to improve herself," Skolsky recalled later. "She wanted to be an actress and a movie star. I knew nothing would stop her. The drive and determination and need inside Marilyn could not be halted."

In addition to her weekly classes at the studio, Marilyn was pressed into service as an extra on a variety of films. Though no exact list of these movies exists, some film buffs claim to have spotted her in the musical comedies The Shocking Miss Pilgrim and You Were Meant for Me, as well as in the western Green Grass of Wyoming.

Appearing as an extra not only allowed contract players an opportunity to understand the process of making a movie but accustomed them to the unique "hurry up and wait" pace of filmmaking. Often actors were rushed into makeup and costume, only to stand around for hours until the director was ready for their scene.

In the spring of 1947, Marilyn was finally given her first speaking role -- a bit part in a musical comedy called Scudda Hoo! Scudda Hay! A bit role differs from extra work in that the actor gets at least one line as well as an acknowledgment of the appearance by the studio. Graduating from extra work to bit parts can be an important step in an actor's career -- many an aspiring star has been noticed by milking a bit into a memorable screen debut.

Marilyn's big scene featured her character, Betty, dressed in a pinafore and walking down the steps of a small-town church. Betty passes the main character, played by June Haver, and says, "Hi, Rad," to which Haver replies, "Hi, Betty."

Hardly earth-shattering material, but Marilyn was supposed to get at least one close-up. After she became a star, the Twentieth Century-Fox publicity department circulated the story that her only line in this film had ended up on the cutting room floor. Marilyn herself repeated the anecdote in 1955, on Edward R. Murrow's television interview program, Person to Person.

However, according to film historian and noted Monroe buff James Haspiel, the story is not true. Haspiel maintains that Marilyn's brief line remains intact in complete versions of the now-obscure Scudda Hoo! Scudda Hay!, as does a shot of Marilyn and another starlet paddling a canoe. Neither shot appears in close-up, however, indicating that Marilyn's close-ups had been edited from the film.

Marilyn's part in this mediocre B-film -- remembered now only because of her appearance -- did little for her career, and it was several months before she got another bit role. In the meantime, she worked on her acting talents. Learn more about this on the next page.