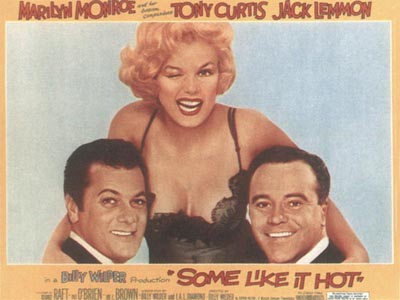 A witty ad campaign highlighted Some Like It Hot's powerhouse cast.

After The Prince and the Showgirl wrapped in the fall of 1956, Marilyn did not appear on a movie set until the summer of 1958. Almost two years had passed between projects, during which time Marilyn had attempted -- not too successfully -- to put some of her personal demons behind her.

On August 4, 1958, Marilyn began work with director Billy Wilder on Some Like It Hot -- a production fraught with horrendous fighting, debilitating health problems, heartbreaking disappointments, and harsh accusations.

Yet, the film would also be her greatest financial success -- her most popular triumph. The tragedy of her life was that such extreme highs and lows were so often wrapped in the same package.

A spoof of the gangster era in Chicago, Some Like It Hot tells the story of two musicians who accidentally witness a gangland shooting not unlike the St. Valentine's Day Massacre.

To escape Chicago and possible retaliation by the mob, the two buddies, played by Tony Curtis and Jack Lemmon, don dresses and join an unsuspecting all-girl orchestra headed for Florida. Marilyn costars as the band's ukulele player, a kooky singer named Sugar Kane, who befriends the two new "girls."

The skirt-chaser played by Curtis falls for Sugar, but the ambitious blonde has confided that her life's goal is to marry a millionaire. This farce of false identities takes a complex twist when Curtis embarks on a second masquerade as a wealthy oil magnate in order to woo the beautiful Sugar.

Through it all, the two male protagonists must keep watchful eyes open for the gangsters, who are determined to track them down and rub them out.

Marilyn realized early on that, as originally conceived, Sugar Kane was little more than a "straight man" for the antics of the two male characters.

She requested that Wilder and his writing collaborator I.A.L Diamond add bits and pieces to the script that would develop Sugar Kane's personality and allow the character to be a more active participant in the fun.

One of the scenes that Wilder and Diamond rewrote is the first appearance of Sugar, captured as she hurriedly wobbles on high heels to catch a train. The rewrite allowed Marilyn to engage in a bit of physical comedy, for as Sugar shimmies along the platform, a sudden blast of steam noisily bursts from the train and across her undulating bottom.

The cheerfully vulgar situation and Sugar's surprised reaction provide the audience with a good laugh and establish immediately the freewheeling nature of Marilyn's portrayal.

Marilyn was pleased with the new scene that Wilder and Diamond came up with. She wanted her character to hold her own in the broad physical comedy intrinsic to a plot involving two men masquerading as women.

By vigorously playing Sugar as a bona-fide kook instead of as just another two-dimensional dumb blonde, Marilyn simultaneously exploited and expanded her image.

Some Like It Hot was photographed in black and white, a decision that was a major point of contention with Marilyn at the outset.

Though this film was an independent project distributed by United Artists, Marilyn's most recent Fox contract stipulated that all her movies be shot in color. She felt that she photographed best in color, and she balked at the plan to shoot her first film in two years in black and white.

Marilyn relented when Wilder showed her color tests of Lemmon and Curtis in their heavy makeup, which assumed a ghastly green tint on film.

As the production continued, Wilder realized that Marilyn's concerns for her character and the quality of the film were the least of his worries. Marilyn's tardiness and absences held up production, pushed the film over its budget, and had a near-disastrous effect on the morale of the cast and crew.

Sometimes hours late, Marilyn kept costars Lemmon and Curtis waiting on the set in full costume and heavy makeup. When she was working, dozens of takes were sometimes required for her to conquer even the simplest of lines.

The need for repeated takes had always been a problem with Marilyn when she felt nervous or insecure. Her drug use and increasing dependence on alcohol during this period greatly magnified the problem.

Her inability to master such lines as "Where is that bourbon?" in less than 40 takes has become the stuff of movie legend. Her costars, particularly Curtis, were upset during these episodes, not only because her problems made for some very long days, but also because their performances became less effective as the number of takes increased.

Curtis's anger at Marilyn over such delays caused him to ridicule or criticize her after filming was completed. His notorious quote about Marilyn -- "Kissing her is like kissing Hitler" -- indicates the degree of tension and resentment that permeated the set.

Regrettably, these tales lead fans to assume that Marilyn was confused or flustered every day of the shoot, which is untrue. Certain sequences, including the exterior beach scenes shot at California's Hotel del Coronado, were mastered in only one or two takes.

Director Billy Wilder's relationship with Marilyn, which began with The Seven Year Itch, deteriorated during the production of Some Like It Hot. After the shoot was completed, Wilder released some disparaging remarks about her to the press.

The hard-bitten director, who had suffered muscle spasms in his back during production, remarked to a reporter that since the film was finished, "[I can] look at my wife again without wanting to hit her because she was a woman."

The comment struck Marilyn and Miller as being particularly cruel because Marilyn suffered another miscarriage after production was completed. Reportedly, the miscarriage resulted from the physical and emotional strain of making the film.

Understandably, Curtis was not crazy about Marilyn. Still, Some Like It Hot will certainly be his most enduring film.

Two years later, at a party celebrating Wilder's next film, The Apartment, Marilyn and the great director mended their differences. Unsubstantiated comments and rumors circulated at the time, claiming that Wilder was willing to work with Marilyn on a third project.

That Wilder thought Marilyn brought something special to the screen is confirmed by his comments praising her "high voltage" and her "luminous" presence.

Of Marilyn's performance in Some Like It Hot, the director remarked, "Marilyn Monroe was very sensitive, difficult, and disorganized. ... In some cases you had to match shots from different takes to make it seem as though she were giving a performance; but there were stretches when she was absolutely phenomenal; one of the great comediennes."

Since Marilyn's death, Wilder's opinion of the legendary actress has remained ambivalent, often contradictory. His conflicting comments reveal not only his admiration for Marilyn's talents but also a deep-seated anger over her unprofessional habits and disregard for her costars.

Wilder's most telling comment about Marilyn was recorded in columnist Earl Wilson's 1971 book, The Show Business Nobody Knows. The director reminisced, "I miss her. It was like going to the dentist, making a picture with her. It was hell at the time, but after it was over, it was wonderful."

In retrospect, the comedic brilliance of Some Like It Hot makes irrelevant the torture that was involved in its creation. Some film historians regard the picture as Wilder's masterpiece, while others name it as the finest American comedy of the sound era.

As a spoof of the gangster-film genre, it is unparalleled. Monroe biographers generally regard the film as the peak of Marilyn's acting career; the innocent aspect of her image was never put to better use and is a key element in the film's success.

Some Like It Hot epitomizes the themes Wilder explored throughout his career. Many of his pictures revolve around some sort of con or swindle -- a murder-for-profit scheme in Double Indemnity; a reporter's opportunistic manipulation of tragedy in The Big Carnival; the double lives of adulterous business executives in The Apartment.

Although photographed in black and white,

the film sacrifices none of Marilyn's considerable allure.

Though Wilder's characters are seldom thoroughly bad, they are often cynical, corrupted, or interested only in personal gain, often at the expense of the feelings or well-being of others.

Wilder typically underlined their deceitful intentions by providing a sharply contrasting character, an innocent figure who is fascinated or victimized by the world's corruption.

In Some Like It Hot, Sugar's sincerity exposes the chicanery of the male characters. The two musicians attempt to deceive the women in the orchestra with their masquerade, while Curtis misleads Sugar further with his oil magnate's disguise. On a more farcical level, Lemmon's character deceives millionaire Osgood Fielding III by leading him on sexually.

Although Sugar -- momentarily swept up in the thrill of being romanced by an apparent oil millionaire -- makes a halfhearted attempt to pass herself off as a society girl, she never fails to freely reveal her thoughts and feelings, even as the two male characters struggle to conceal theirs.

Wilder's ironic, sometimes caustic view of life is revealed at the end of the story, when all of the deception is exposed, yet few consequences are suffered.

Jack Lemmon's enthusiastic and brilliantly funny performance is a high point of Some Like It Hot, but it is Marilyn's luminous presence and witty interpretation of Sugar that make the film a special one.

Though Sugar is vitally important to the picture, and the image of Marilyn Monroe essential to convey the innocence necessary for the role, Marilyn managed to enrich the character even further. Her insistence on making her characters real -- a result of her Method training -- added a human quality to Sugar.

Some Like It Hot depended on the actors' ability to nimbly handle physical humor and broad farce; despite their personal differences, Marilyn, Curtis, Lemmon, and the rest of the cast (which includes veterans George Raft and Pat O'Brien, cleverly spoofing their own images) faced the challenge.

Together, they created an American film classic. As time passes and memories of the turbulence of the production fade, it will be the film itself that will be remembered. Some Like It Hot -- and Marilyn's wonderful performance -- will endure.

Some Like It Hot was nominated for six Academy Awards, though Marilyn was overlooked in the Best Actress category. The film won only one Oscar -- for costume design in a black-and-white film.

Still, Marilyn's performance did not go totally unrewarded; she won a Golden Globe Award as best actress in a comedy or musical and, once again, received sparkling reviews.

As the decade drew to a close, the contradiction between the turmoil of Marilyn's personal life and the fame of her stardom became more dramatic than ever before.

Two ill-fated pregnancies and an increasing dependency on the escape offered by drugs and alcohol wore Marilyn down, making her distressed in private and even more timid with strangers.

In June 1959, she elected to have surgery to increase her chances of having a child. The effort would prove futile, leaving her insecure about her womanhood.

In her public life, Marilyn's celebrity reached such proportions that she was invited to meet Soviet premier Nikita Khrushchev during his 1959 visit to America. Marilyn flew to Los Angeles to join other stars and studio luminaries at a special luncheon arranged by Twentieth Century-Fox.

If the private Marilyn doubted her identity as a woman, the public Marilyn affirmed it for her. The movie star would remark after her luncheon with the powerful world leader, "Khrushchev looked at me like a man looks at a woman."

Next up: The musical comedy Let's Make Love. Find out about Marilyn's role in this film in the next section.