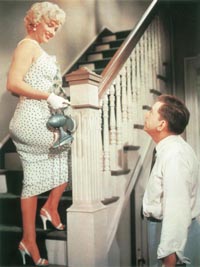 The Seven Year Itch is pure delight, and one of the best American film comedies of the 1950s.

A short time after her divorce from Joe DiMaggio, Marilyn attempted to report to the set of The Seven Year Itch, which was wrapping production in the studio in Hollywood. Wilder sent her home. With a bit of understatement, he said, "She has a comedy part, and she couldn't see much comedy in life today."

Marilyn had been late to the set several times before the announcement of the divorce, and the producers now feared the worst. But, surprising everyone, Marilyn jumped back into her role with total concentration.

She was so engaged in her work that Wilder often got what he wanted after only one or two takes.

None of the turmoil of Marilyn's personal life ended up on the screen. The Seven Year Itch is considered one of Marilyn's best films, for a variety of reasons: the inspired performances by Marilyn and costar Tom Ewell, the direction by Wilder, and the script by Wilder and George Axelrod.

Though Marilyn's character of the "The Girl" may appear to be just another dumb blonde, the sheer force of Marilyn's talent and personality grants the character an innocence and dimension beyond the reach of lesser actresses.

The film's simple storyline revolves around the inner conflicts of Richard Sherman, a role Ewell was reprising from the Broadway production. Sherman is a very married New Yorker who daydreams and fantasizes about The Girl, a gorgeous model who has sublet the apartment above him.

Sherman's wife and young son have gone away for the summer, and he seizes the opportunity to get to know The Girl. Torn between his fantasies about The Girl and his guilt over betraying his wife, Sherman eventually sees the wisdom of remaining a faithful husband.

As the object of his fantasies and desires, The Girl is, in part, a figment of Sherman's imagination. We learn little about her as an individual; she doesn't even have a name. As such, the potential exists for the character to be shallow and even unsympathetic.

Yet, Marilyn's ability to combine sexuality with a childlike innocence, plus the way her natural warmth and sincerity shine through her surface glamour, elevates the character of The Girl above the level of mere sex object.

The Girl is far from a buffoon; to the contrary, she is clearly at ease with her sexuality. Even when Sherman's fantasies become wild and extreme (and extremely funny), The Girl remains in control of the relationship. When she makes it clear to Sherman that romance is out of the question, she does it with wit and kindness.

The role of The Girl was perfectly suited to Marilyn's screen image, and The Seven Year Itch garnered the actress some of the finest reviews of her career. With a few notable exceptions, critics focused on Marilyn's flair for comedy rather than on her shapely figure, even comparing her to the highly regarded comedienne Judy Holliday.

Aside from giving Marilyn one of the best parts of her career, The Seven Year Itch playfully acknowledged Marilyn's star status by incorporating elements of her own life into the character.

The Girl models for men's magazines, much like Marilyn had done in her salad days. She also once posed for "an artistic picture," a tongue-in-cheek reference to Marilyn's famous calendar photo.

The in-joke is carried to its extremes when a friend asks Sherman who the woman is in his kitchen, and he teasingly replies, "Marilyn Monroe."

Director Billy Wilder was fond of such cinematic references to real-life Hollywood and often incorporated amusing or cynical comments on screen legends in his films. It was an element he exploited in the next film he would direct with Marilyn, Some Like It Hot.

On the set of The Seven Year Itch, a grip peers from behind a flat as actor Victor Moore rehearses the extrication of The Girl's toe from a bathtub faucet.

The Seven Year Itch was released in June of 1955. By that time, Marilyn was embroiled in another dispute with Fox and had formed her own production company to secure better roles.

There had been a few worthwhile roles along the way, but Marilyn was generally dissatisfied with the type of parts she was assigned by Fox. She realized that the studio executives, particularly Darryl Zanuck, did not believe she had the potential to become a serious actress.

Moreover, they did not want her to become a serious actress. She had been stereotyped as a dizzy blonde bombshell who specialized in comedies and musicals, and the studio would continue assigning her these types of roles because she had been so successful at them.

In retrospect, it is difficult to understand the level of control the film studios had over the actors under contract to them; if Fox determined that it was not in their financial interest to assign Marilyn dramatic roles, then they would not do so, no matter how big a star she became.

In the few years since Niagara, Marilyn had gone from rising star to Hollywood goddess. Her salary had increased and her acting had improved tenfold.

She had become the top box-office attraction in America as well as in other parts of the world. With the increase in stature came an added pressure, which was often magnified by the turbulent events of her private life.

Despite the burdens of her personal and professional lives, and despite her status as a star, Marilyn decided to leave Hollywood for New York to study acting. She was determined to become a serious, dramatic actress -- with or without the studio.

Though a bold move for any actor, the decision was particularly courageous for Marilyn, who battled more insecurities and personal demons in a single day than most of us will in our lifetimes.

As another way to get more control over her career, Marilyn developed Marilyn Monroe Productions, Inc. Learn more about this move on the next page.