Marilyn Monroe and the Marx Brothers 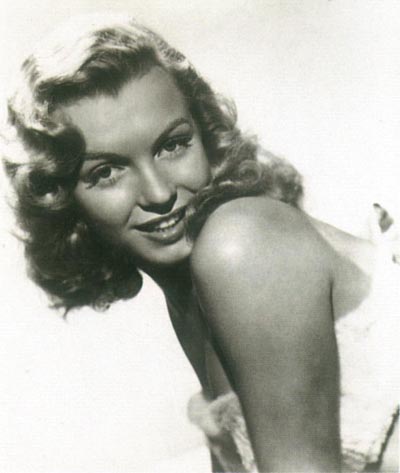 As a freelancer, Marilyn won a tiny but noticeable role in 'Love Happy,' the last film the Marx Brothers made as a team.

After being released from Columbia, Marilyn experienced several lean months. Often penniless, often hungry, she returned to modeling for some much-needed cash. The jobs, however, were few and far between.

One unsavory rumor about Marilyn's attempts to stay afloat at this time claim she worked as a stripteaser in downtown Los Angeles. The rumor is likely to have originated with people who saw a young stripper named Dixie Evans, who performed at L.A.'s Mayan Theatre, and who bore a remarkable likeness to Marilyn. Evans would later exploit this resemblance by billing herself as "the Marilyn Monroe of Burlesque."

Another, particularly persistent, rumor cites Marilyn as the "star" of a stag film entitled Apples, Knockers and Cokes; film historians have refuted this allegation. Some researchers, in fact, claim to have identified one of Playboy magazine's early centerfold models as the performer in question. Coincidentally, this model later became a bit player at Columbia.

Despite her lack of a studio contract, Marilyn still had the support of her agent, Harry Lipton, as well as that of Karger, Lytess, and the Carrolls. Through the efforts of one of these associates, Marilyn auditioned for producer Lester Cowan for a walk-on bit in a Marx Brothers film, "Love Happy." Marilyn was required mainly to catch the eye of Groucho Marx (who plays a private detective) as she sidles past him.

According to Marilyn, she practiced walking in front of a mirror for a week. Of the three girls who auditioned that day, it was Marilyn whom Groucho asked to repeat her interpretation of a sexy walk. Groucho approved and Marilyn landed the role.

As she glides toward the camera in the slow, undulating walk that would become one of her trademarks, Marilyn's character tells Groucho, "I want you to help me ... Some men are following me." Groucho gives his patented leer and remarks, "Really? I can't understand why!"

Many have attempted to explain "the walk," including Natasha Lytess, who claimed she invented it for Marilyn, as well as Emmeline Snively, who insisted it was the result of weak ankles.

Gossip columnist Jimmy Starr believed Marilyn simply shaved a bit off one high heel in order to undulate in that manner, while Marilyn herself declared that she had always walked that way.

"Love Happy" is a minor, unfunny comedy that captured the Marx Brothers at the tail end of their film careers as a team. Still, Marilyn made enough of an impression on producer Cowan for him to release a publicity statement about her to columnist Louella Parsons. Cowan told Parsons that Marilyn was an orphan who had been raised in a series of foster homes in the Hollywood area.

Despite the brevity of Marilyn's role in "Love Happy," Parsons mentioned the starlet in her column. The writer became an early champion of Marilyn and later defended her on the occasions when Marilyn ran afoul of the press or her studio.

Marilyn agreed to travel to New York to help promote "Love Happy." Having always heard that New York was much cooler than Los Angeles, Marilyn packed only heavy, woolen suits to wear to the various publicity functions.

Cowan and Marilyn arrived in New York in the midst of a summer heat wave. The producer graciously purchased a simple cotton dress for Marilyn, though some publicity shots show her wearing a woolen suit while eating three ice cream cones, supposedly in an effort to keep cool.

While in New York, she participated in a publicity stunt for Photoplay magazine, in which she presented movie fan Virginia MacAllister with a brand-new home that MacAllister had won in Photoplay's "Dream House Contest." Photographs of the presentation appeared in the magazine's November 1949 issue.

Nearly simultaneously, Marilyn appeared in the October 1949 issue of Life magazine, in which she was photographed "emoting" with seven other Hollywood starlets. Together, these articles generated some much-needed publicity for the young actress.

She also landed a bit role in the forgettable Twentieth Century-Fox musical "A Ticket to Tomahawk," though she was still working without a contract.

During Marilyn's first three years in the film industry, she suffered rejection on both a professional and personal level; she sought the counsel of many who claimed to have an inside track to Hollywood success, only to be disappointed by their lack of results; she worked hard to please those who could help her; and in order to pay her bills, she was forced to make sacrifices and compromises others would later criticize. Looking back over Marilyn's early film experiences, one is struck not by the glamor of Hollywood but by its harsh reality.

Fortunately, Marilyn's small bit in "Love Happy" would prove to be more of a break than she anticipated. In addition to the attention she received by promoting the film in the East, she attracted the eye of respected Hollywood agent Johnny Hyde, who saw the comedy at an advance screening.

Hyde tracked down the agent of the beautiful blonde with "the walk" and negotiated with Harry Lipton to take over the contract of Marilyn Monroe. Marilyn needed an opportunity, she needed expert guidance, and she needed confidence. She would get all of that -- and more -- from agent Johnny Hyde.

Just before meeting Hyde, however, Marilyn was desperate for money. Learn about her nude photo shoot in the next section.