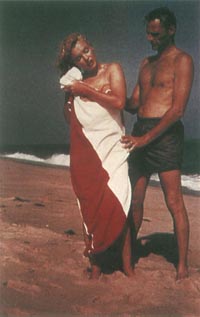 Marilyn's marriage to playwright Arthur Miller seemed to be a fairy-tale conclusion to the beautiful star's quest for happiness.

"If I were nothing but a dumb blonde, he wouldn't have married me." -- MARILYN MONROE, ON ARTHUR MILLER

The double excitement of a possible Arthur Miller-Marilyn Monroe marriage and Miller's squabble with the House Un-American Activities Committee was sufficient to turn "the Egghead and the Hourglass" into the biggest news story of the summer of 1956.

Articles that focused on the couple's romance seldom failed to mention Miller's HUAC headache, and stories that described Miller's fight with HUAC inevitably mentioned his relationship with Marilyn.

Not only did the double-edged story make life difficult for Marilyn and her new fiancé in terms of increased press coverage, but it was only a matter of time before one of them inadvertently blurted out too much information about their plans.

On June 21, 1956, during part of his testimony to HUAC, Miller revealed that he needed a passport to travel to England to discuss a possible London production of his play A View from the Bridge. He added, "And, I will be there with the woman who will then be my wife."

Afterward, reporters in Washington nailed him on the latter half of his comment, insisting that Miller announce the date. The beleaguered writer could only mutter that the marriage would take place "very shortly." What occurred next amounted to a virtual feeding frenzy among reporters and photographers as they relentlessly tracked Marilyn and Miller.

When the press camped out in front of Marilyn's apartment building, the couple retreated to Miller's farm in Roxbury, Connecticut. Undaunted, the newsmen quickly set up shop on the doorstep of the Roxbury home. Miller persuaded them to leave only after he promised a news conference for the end of that week.

On June 29, the day of the scheduled press conference, hundreds of newsmen descended on the Miller property, trampling down the grass, even hanging from branches in the trees.

In the early afternoon, the monotony of waiting for the famous couple was interrupted by the sound of a horrible crash. A few seconds later, a car carrying Marilyn and Miller sped up the driveway to the door. All of the car's occupants dashed quickly into the farmhouse.

Miller's cousin, Morton, emerged from the house to announce that a terrible tragedy had occurred. A press car carrying reporter Mara Scherbatoff had crashed into a tree while in pursuit of Miller's car.

Scherbatoff's teenage driver, unfamiliar with the winding country roads, had been going too fast in an effort to keep pace with the Miller party. Scherbatoff, the New York bureau chief for Paris-Match magazine, was rushed to a nearby hospital. Her injury proved fatal, and she would die a short time later.

When Marilyn and Miller finally appeared on the lawn, accompanied by Miller's parents, they seemed outwardly calm, though some accounts of the day claim that Miller was livid at the press and Marilyn was almost hysterical over the accident.

Perhaps in fear that the paparazzi's zealousness could result in another tragedy, neither revealed an exact wedding date as originally promised.

Later that evening, Marilyn and Miller slipped across the state line to White Plains, New York, where they were married in a civil ceremony. Whether the accident had anything to do with the promptness of their decision is open to debate.

Certainly, both wanted to put an end to the circus atmosphere. Two days later, on July 1, 1956, they were married in a Jewish ceremony at the home of Miller's agent. Lee Strasberg gave the bride away, and husband and wife celebrated with a reception for 25 close friends and associates.

Despite the tragedy that had preceded the event, Marilyn and Miller were ecstatic at their union, which is clearly evident in their wedding photographs. Marilyn not only adored her new husband, but she admired him for his talent and accomplishments. The usually reserved Miller was openly enamored of his beautiful and sensitive bride.

Marilyn embraced family life, becoming quite close to her in-laws, Isidore and Augusta Miller. She referred to them as "Mom" and "Dad" almost immediately. Marilyn would remain close to her father-in-law until her death, visiting him on occasion and asking him to escort her to important functions.

She also took instruction in the Jewish faith, and it was her decision to marry in a Jewish ceremony. In an interview from that period, Arthur Miller commented, "Until recently, I took my family for granted. But Marilyn never had one, and she made me appreciate what that means. When you see how much a family matters to her and you understand the depth of that feeling, you'd have to be an ox not to respond."

Within weeks of marrying Miller, Marilyn began work on her new movie, The Prince and the Showgirl. Find out more about this role on the next page.